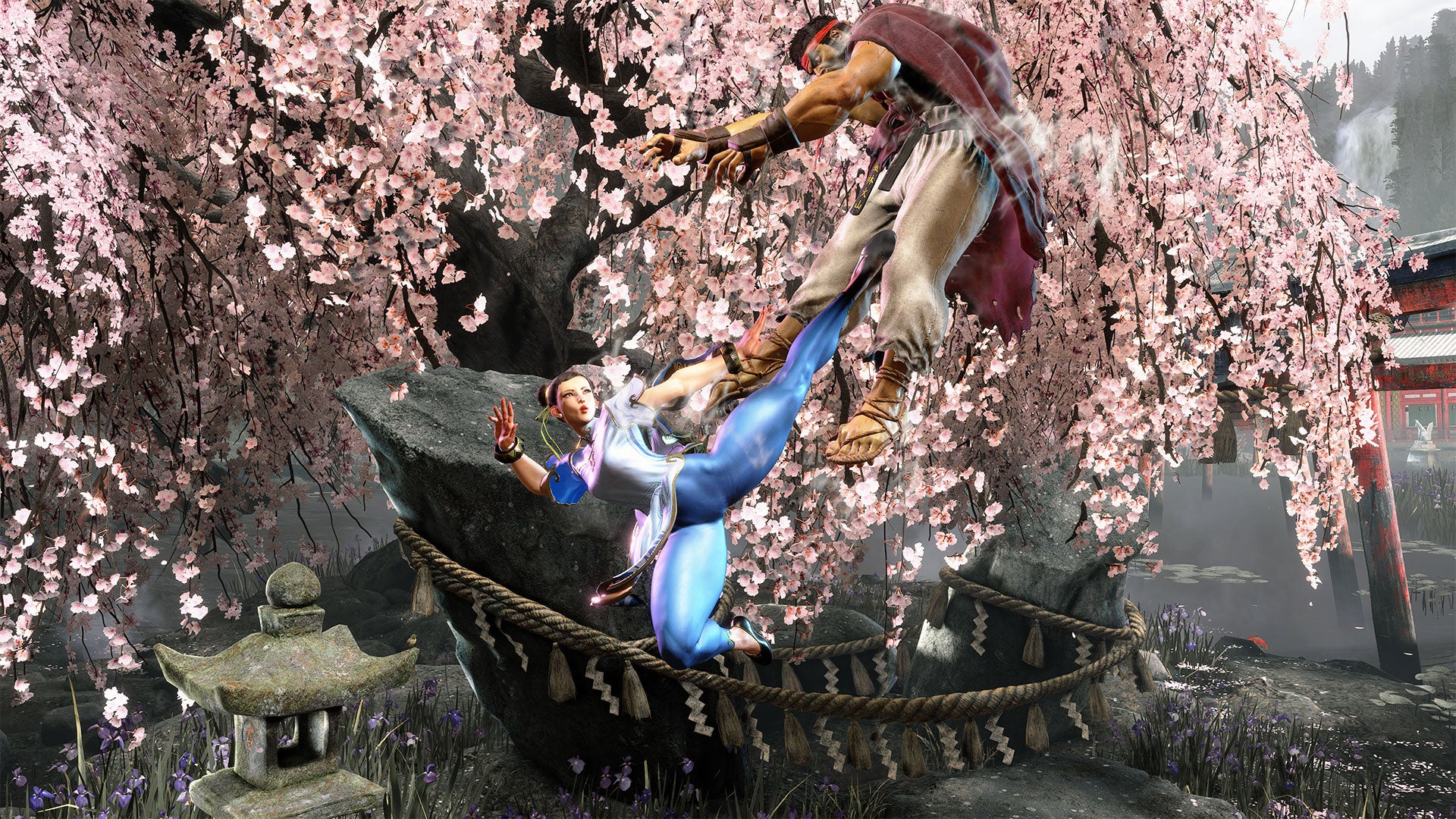 If there’s one lesson that sports stories impart, it’s that sometimes you have to get knocked down, or even get knocked out, to get better. It’s the lesson at the core of the world’s most famous fictional fighters, from Rocky to Ryu: every now and then you need to get your ass kicked, and have a good old fashioned montage, in order to get better. It’s a tale as old as time. And it just might be the story of Street Fighter 6.

I’ve always rather liked Street Fighter 5 for what it was and therefore been relatively charitable when writing about it, especially in its later years, but it’s fair to say that SF5 was a misfire. Mismanaged into a launch where fan expectations were disastrously underestimated, the game never truly recovered. In addition, though, it just didn’t feel as good momenmt-to-moment as its predecessor, which was such an excellent game that it helped to revive the whole fighting game genre. But now I believe that SF5 will be recontextualized as the game that humbled Capcom and taught hard lessons, ultimately getting us to SF6. And SF6? Well, despite high expectations, even in the earliest, extremely limited hands-on, it whiffs of a total home run.

Having played a little over an hour of an early Street Fighter 6 build featuring the first four characters revealed for its roster, I’m thrilled by more or less everything about it. You can pretty much instantly tell that lessons have been learned; not just from SF5’s failures, but also from its successes. And not just from past Street Fighter, but from other brilliant recent fighting games, and from esports titles outside of the fighter sphere.

At a glance, its presentation is crisp, fresh, and a lot more modern-feeling than the last two ‘series’ of SF games. Character designs move the cast forward while retaining what made them truly iconic. Most crucially, the new mechanics seem to ruminate deeply on the best aspects of Street Fighters 3, 4, and 5 – and then tries to bridge them by mixing new mechanics with elements from all three games.

The headline new feature in Street Fighter 6’s combat is the ‘Drive System’, though what this really refers to is a range of different mechanics all unified under one new banner – a six-segment meter directly beneath the life bar known as the Drive Gauge.

While there’s still a Super Meter in the bottom of the screen, that is now strictly used for Super Moves, and can fill up three times, allowing access to three different ultimate moves. The Drive Gauge governs all other unique mechanics, however, including the powered-up specials previously known as ‘EX’ moves, now called ‘Overdrive’ moves.

Because core actions beyond normal attacks and basic special moves are tied to the Drive Meter, the entire combat system of SF6 revolves around use and management of that meter. It’s in these various uses that shades of other SF titles come into play, too. The Drive Impact has shades of SF4’s Focus Attack, for instance, able to absorb an opponent’s attack, while a variation called the Drive Reversal channels SF5’s V-Reversal to strike back with a crumpling blow.

The Drive Parry is reminiscent of Street Fighter 3, and can either be timed for a quick parry if you’re skilled enough or held to parry continually at a more heavy meter cost while leaving you vulnerable to throws. The Drive Rush is a special canceling forward dash that can catch an opponent off-guard, and as previously mentioned Overdrive can give any special move a beefed-up version, like old EX moves. The separate, traditional blue super meter now governs supers alone – removing the trade off and making it more likely you’ll see those flashy moves in any given match.

The Drive Gauge is interesting for a few reasons. For one, it starts full every round, meaning you can rip off Overdrive moves and other powerful techniques from even the first moment of the first round. You have to spend its six bars wisely, though, as it’s slow to replenish. There’s a low tick of constant passive restoration, and it also rebuilds as you successfully land attacks. If you accidentally use your entire Drive Gauge, you enter a sort of ‘exhaustion’ state that makes characters slower and more vulnerable. Even though there is still stun in the game, how rarely stun is triggered means this exhausted state feels like your greatest enemy. Spamming will result in exhaustion, most likely followed by a beatdown from your opponent.

The Drive Gauge even serves to balance out the ease with which the ‘Modern’ control method works. Make no mistake – despite the name, this is a simplified control method, and the intention is plainly that most players will graduate from this to more traditional Street Fighter controls. There’s simply too many restrictions, too much you can’t do with these controls, for it to be a viable way to play forever. But for players at a certain level, it’s perfect. And as an entry point, as the gateway drug, it’s perfect – and unlike the main controls it’s built for a gamepad first and foremost.

For the most part it just gives you easy, one-button access to each character’s most key special moves, but it also features an auto-combo system that can be activated by holding the right trigger and pressing attack buttons – but doing this ultimately costs Drive Gauge, as auto combos finish with an Overdrive move. This means spamming the auto combos mindlessly will quickly put you in an exhaustion hole, so you still have to think strategically, and act with care.

Obviously, an hour with game systems of this kind isn’t the ideal way to form a solid opinion on them. In fact, I don’t truly think it’s possible even for the deepest of pros to draw a conclusion in such a short time, leave alone a player like me who hovers around Super or Ultra Gold ranking online in SF5. I do trust my instincts though, and know in my gut that this game feels inherently better, and more brimming with possibilities, than Street Fighter 5 did at this stage of its development. I’d go one step further, though: I think this game shows more initial potential than even Street Fighter 4.

Elsewhere, this build is littered with evidence of a developer going balls to the wall, treating nothing as sacred and just going for it. Characters have new theme tunes – not arrangements, but actual new songs. The optional commentary feature is a clever overture to esports ambitions, but also might actually be helpful in offering beginner players advice. Then there’s the pivot towards the ‘Street’ in Street Fighter – in music, in the way the menus look and feel, in the very soul of the game. It all just works. I absolutely adore the flow of picking a stage, character, and entering a match in this game. I’m sure eventually I’ll be hammering start to skip it – but it’s the best in the series to date.

What sets Street Fighter apart and always has is its cast, however – recognizable, wonderful caricatured world warriors with someone for every player to identify with. Even they haven’t been left untouched, both in terms of the new heightened realism offered by the RE Engine but also in how they play and what their place is in the SF world.

For old characters, the combination of new mechanics and an opened-up timeline is transformative. Chun-Li has her iconic moves, for instance, but also has a new stance-based system that you can branch into that opens up some new combo opportunities. Like her character design change, these adjustments demonstrate who she is at this new, latest point in the Street Fighter timeline: comfortable with herself, a respected legend – and a protective adoptive mother. The same is true for Ryu, who is done with his constant battle with the darkness within and instead is now coolly devoted to bettering himself. The result? Some new moves, of course, but also a new energy about his animation – he’s no longer the unsure student, but the imperfect-perfect master; the natural next step for him as a character.

I focus on the returning characters here because they best demonstrate how this new setting is really working in SF6’s favor. It feels familiar, but like a departure at the same time. Where SF4 felt like an SF2 re-run and SF5 felt more like an Alpha series nostalgia tour, this feels new – even in a build where there are only four characters.

Newcomers are meanwhile an opportunity to explore the unknown. Luke is what you’d expect from a new game’s mascot – an inoffensive everyman with a little bit of everything that made SF beloved to begin with. Jamie is more interesting, with a command grab and kick moves that offer sublimely good pressure on the opponent. But once that pressure is applied, the widened defensive options of SF6 open up. In some matches, the most thrilling moments came as Jamie’s kicks connected with a parry that then gives way to a drive reversal, which in turn leads into a brutal punishing combo. This isn’t to say SF6 feels like a defensive game, though – in fact, in this brief session, it felt more offensively-driven than SF5, even though when you’re under assault there’s good options to escape.

I could go on. But I think, for now, I want to draw a line there – in order to let my thoughts settle over the weekend. To say I’m excited would be a gross understatement, however – this is the rare game where I’m positively bouncing off the walls thinking about future reveals. I want to know how Rashid plays. What that new African-American ninja girl is about. I want to see my main, Cammy. After seeing what they did to Chun, I can scarcely imagine what Cammy will look like in this system.

I’m brimming with excitement. SF5 served me well – hundreds of hours logged on Steam. I never regretted that game’s existence, unlike some. But now I definitely don’t, as it delivered a series of necessary lessons that has seemingly poised Capcom to make a worthy new-generation Street Fighter that could be genre defining. For me, this is the real next-gen: a new generation of fighters. I can’t wait to see and play more.

As Sandra Bullock Prepares To Take A Break From Acting, The Star Talks About Feeling ‘So Burnt Out’ From Her Career
Comic creators Joshua Williamson and Andrei Bressan reunite to embark on a DARK RIDE
‘Elvis’ $3.5M, ‘Black Phone’ $3M In Previews As ‘Top Gun: Maverick’ Soars To Half Billion Stateside Today – Box Office
Lilo & Stitch Director Throws Family-Friendly Shade At Frozen Fans, And He’s Not Wrong
Get 45% off the Razer Kraken V3 X gaming headset on Amazon