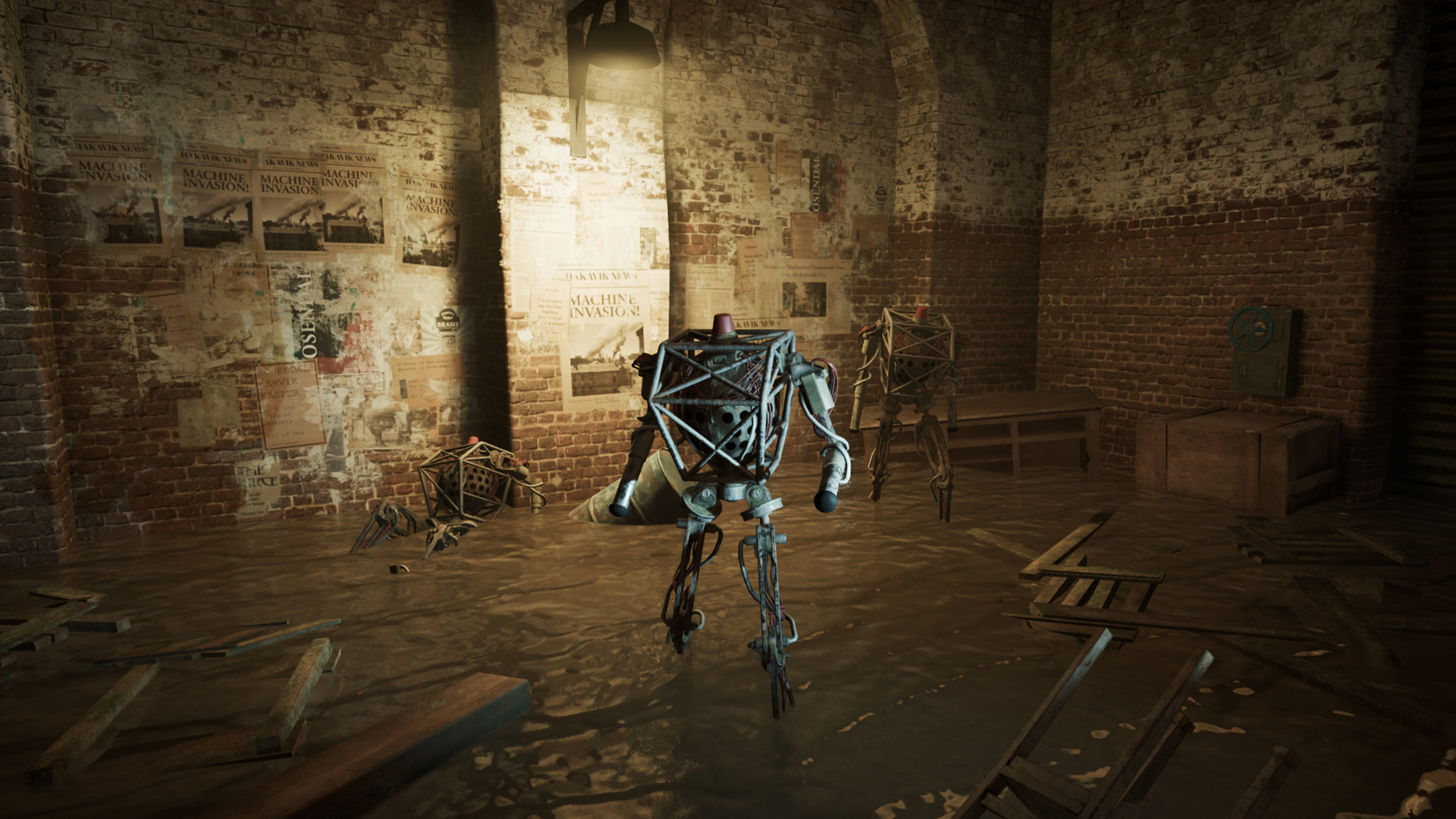 Back in 2007, Bioshock burst onto the scene. I loved it but as things progressed, the disc got scared of working properly and the game ran at half speed; sometimes I had to reboot it again and again. It didn’t matter because I was so involved in the story, the world, and the game that the problems whirled away into nothing. So the same is found with Industria, not because the disc is knackered (we’re digital here!) but there’s a chance many will get annoyed with certain things, no doubt finding it infuriating and give up. But not me – Industria isn’t as broken as that old Bioshock disc but it certainly has some problems. The thing is, I still love it.

Industria harks back to a point in time – mostly the 2000s – when we were awash with first-person shooters complemented by a linear adventure. Bioshock and Half-Life 2 are the two games that remind of Industria. This game obviously hasn’t had a smidgeon of the budget of those two games, but it’s still able to produce a compelling experience, albeit being a bit janky in regards to its mechanics.

The story starts with us in Berlin, 1989, on the eve of the fall of the Berlin Wall. You play a woman called Nora who lives in the Soviet-controlled East Berlin, living nearby to the science facility where she works. She is woken up in the night by her partner – both in love and work – before heading off to work to try and find out what has happened to him. She follows his path and ends up travelling through time and space to a fictional city. Here there is no one left in the world, apart from one person, and there seems to have been some war between man and machines. You venture out looking for your partner, Walter, and some serious answers…

The story, narrative arc, and writing are particularly good, both with its words but also in regards the visual storytelling; it is magnificent in the way it uses clever level design. The landscapes throw between reality, a fictional world, and a strange dream place with ease. You are left with questions at the end, but these aren’t annoying ones without a satisfying answer, but questions you want to see answered in future episodes. The characters are well-drawn with some emotional and lovely written dialogue, whilst the world-building is fantastic. I loved learning about and spending time in this fictional city. It also tackles some dream surreal sequences with flair and intrigue, with a big shout-out going the way of the weird theatre shows that happen sporadically throughout.

You have a choice at the start of the game, whether to run on normal or hardcore. Hardcore makes the game well… harder, but it also means you have limited save points throughout the game; like typewriters in Resident Evil. This isn’t something which is particularly needed apart from for the strong-hearted, because Industria is already tricky due to limited ammo and even with the auto-save points, it means a lot of reloading scenes when you die.

Industria works as a first-person shooter; walking, running, crouching. There is combat here in terms of utilising shotguns and rifles. You even have a pickaxe to break boxes and open doorways by hacking down boards. There are some very puzzles to solve and a bit of ‘find this object’ to open a doorway or operate a machine. Everything about the gameplay works, but it’s just not as polished or fun as a triple-A game would be. In fact, combat is clunky at times, with strange enemy AI and not a particularly good aiming system. There are also some small glitches present, but nothing game-breaking, whilst the game mechanics are pretty average. But as mentioned earlier, none of this stopped me from having a great time playing through the five hour experience that Industria brings.

Visually, it is ambitious in terms of what the development team creates, especially in the interesting and varied world. I love the city you end up in, with its abandoned rooms, courtyards, and strange machines littered around from a war that happened that you never see. The machines you fight are a good mix as well, from little fast bombers to lumbering droids. However, the real stand-out moments are the more surreal sections set in the mysterious library and strange theatres. Further, the soundtrack is emotive and works beautifully with the action, whilst the voice-over work from the actors delivering the lines is done with sentiment and passion, helping bring the world alive.

Many may be frustrated by the average gameplay and – at times – bog-standard combat offerings that are found in Industria. However, I found the narrative, the ambition of the game, and the sense of wonder and place all very intriguing; at times, melancholic. It is sometimes good to be playing a game like Industria and it would be pretty amazing to see what the team behind it could do with a bigger budget.

Industria is available from the Xbox Store