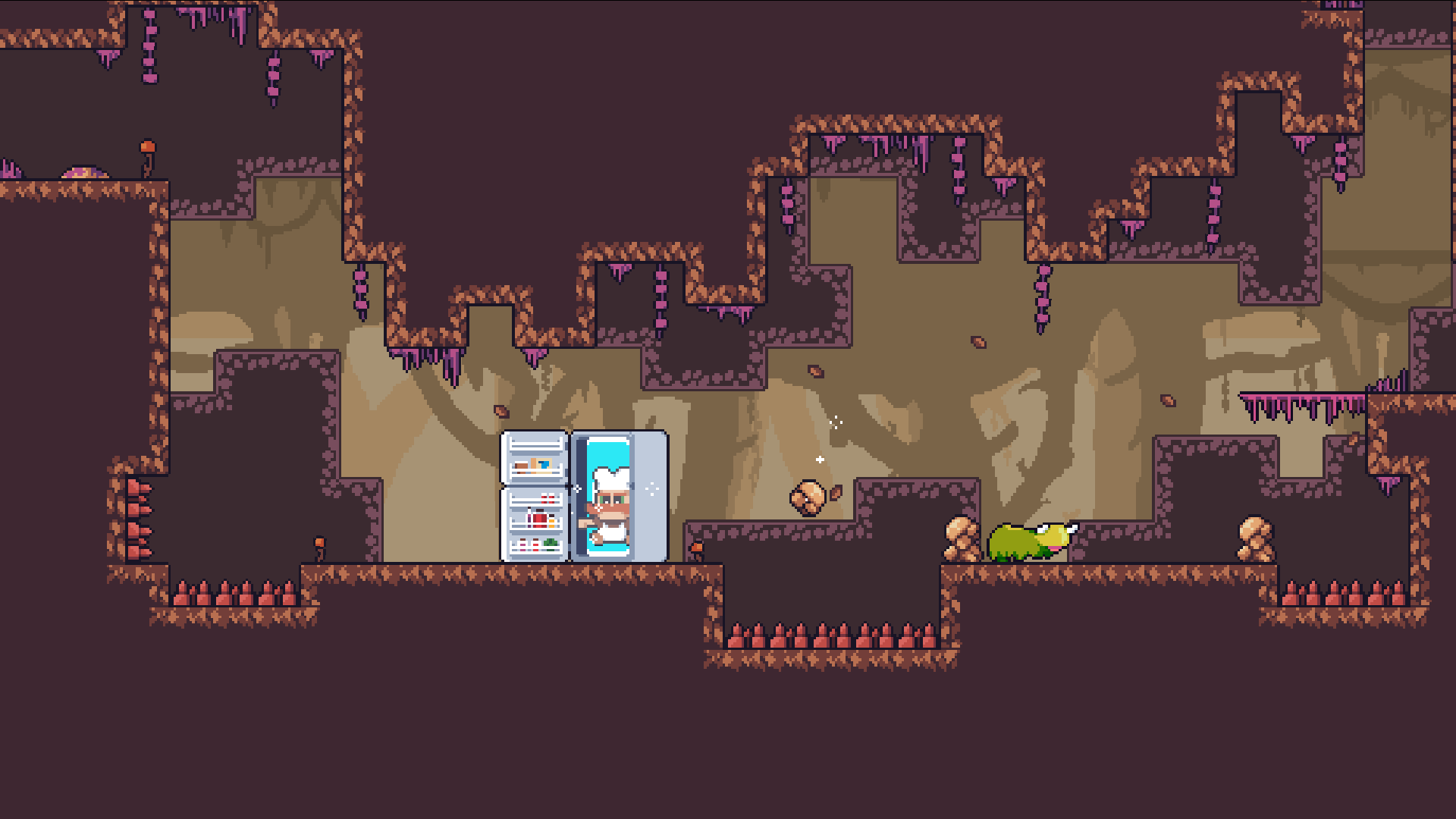 It’s not an auspicious start. Chefy-Chef sounds like it’s been named by the same people who voted for Boaty McBoatface. It’s published by Ratalaika, who don’t often punch above a 3.5/5, and it costs less than a large popcorn at the cinema (we live in an expensive area). Not that price should matter, but you don’t often see a winner for less than a fiver.

Well, hold the presses, because the stupidly named Chefy-Chef is rather brilliant. It’s small but perfectly formed; a game that has zero pretentions, yet does everything you could possible want from a budget platformer. It plays well, has some neat ideas that push it away from other games, and it keeps things varied over a long old space of time. This is, dare we say it, the yardstick for concise platform games.

We had to rewatch the opening cutscene to remember what the story was about. The main character is Chefy, and he’s got a taste for pineapple-radish salad. But as he approaches the fridge, it goes all Ghostbusters and teleports him to three worlds of platforming goodness: the jungle, icy mountains and a swamp. In each level, held aloft on a pedestal, are the three ingredients of his prizewinning salad: a radish, a pineapple and some milk. If he collects them all, the fridge-portal reappears. Chefy hops in, hoping each time that his next leap will be the leap home.

There’s some kind of social commentary going on, as there’s also a hidden burger in each level. Presumably, Chefy has a taste for a dirty smash burger, and likes to keep that secret hidden.

But what absolutely makes Chefy-Chef is its kitchen utensils. Yeah, you heard us. In the levels, you might come across a knife, a garlic hammer and a frying pan. These are mapped to LB, X and RB respectively, and they stay with you for the length of the level. Duck into a fridge, and they need to be regained from the following level.

The knife isn’t anything particularly new. It’s a wall-climb, as you dig into a wall with the blade and clamber up. But it’s also a projectile weapon. Chefy-Chef doesn’t do what you think he will with it: there are precious few enemies in the game. So, instead, it’s more-often used to obliterate walls and fire through small gaps to ricochet and press buttons. It’s got something of the Swiss Army Knife about it.

The garlic hammer, again, isn’t a weapon. It’s a portable springboard, as you smash the floor and catapult yourself up the game screen. It doesn’t care much for the surface it propels off, either: you can smash into spikes to get a hefty lift, for example, which makes it a strong protection against a spiky death. Handily, it can also smash blocks beneath you, which the knife can’t manage.

But the pièce de résistance is the mighty frying pan. It’s a beast. You can throw it in a mighty arc, and then quickly tap RB to teleport to it. A crevasse is stopping you from reaching a switch on the other side? No worries – just toss the pan and teleport to it once it lands on the other side. It can swoop you past fire, spikes, brambles and more. We want one for reals.

They might not seem staggering on their own, but what makes Chefy-Chef a recommendation is the synergy between them. Throw a frying pan onto a wall, teleport to it and then stick a knife in the rubble to climb upward. Toss a pan over some spikes and then use the garlic hammer to bounce skyward. These items mesh in a variety of ways, and effectively means that you can reach any area on the game screen, should you be well equipped. The knowledge that nothing can stop you is delicious.

The levels, in turn, have fun with that knowledge. They make the levels into mazes, but the paths are far enough away from you that getting there’s a challenge. Perhaps you don’t have the utensil for this particular obstacle, so you search in another direction. The levels are constructed like tiny Metroid dioramas: areas are blocked until you have the utensil that gets you past them, and then it’s onto the next level with the same problem. The endlessly resetting Metroidvania approach is one that you can imagine other games stealing.

It’s not perfect by any means. The burger collectibles are hidden in the oddest of manners. One vine, leaf or flower in the level jiggles slightly more than the others, and this is where the burger is hidden. But enemies and Chefy will make those same plants jiggle whenever they touch them. So, hunting for collectibles has an unsatisfying edge: you think that you’ve found the level’s burger, but it’s just a leaf that’s moving because a monkey tossed a bomb in its vicinity.

And sixty levels across three worlds is a bit of a stretch. The worlds offer new hindrances like sticky goo that stops you double-jumping, or icy, sliding platforms, but they get introduced extremely rarely. We found ourselves getting a little antsy for a new world to be introduced, as we felt like we were done. But the counterpoint to that is that you get a huge amount for your £3.99 – roughly four hours of play, we’d guess. So, if you can stomach a bit of repetition, or play in short bursts, then the problem will be minimised.

We want to give Chefy-Chef a hug. It is far tighter, more imaginative and endlessly more fun than we expected. We were preparing ourselves for some of the most tired of platformers, and instead we got a textbook example of how a £3.99 gaming snack should be made. So don’t hesitate – pop to the fridge and whip up a quick dish of Chefy-Chef.

You can buy Chefy-Chef from the Xbox Store

Jurassic World: Dominion’s Chris Pratt Clarifies Claims That The Threequel Will End The Overall Jurassic Franchise
Destiny 2: Where Is Xur Today? Location and Exotic Items Guide for May 20-24
Jerry Bruckheimer Gets Asked If Johnny Depp Could Return For The Pirates Of The Caribbean Movie Not Starring Margot Robbie. Here’s What He Says
Machine Gun Kelly On What It Was Like To Direct Fiancée Megan Fox In His New Movie
Version1 Rocket League partners with Undeniably Dairy