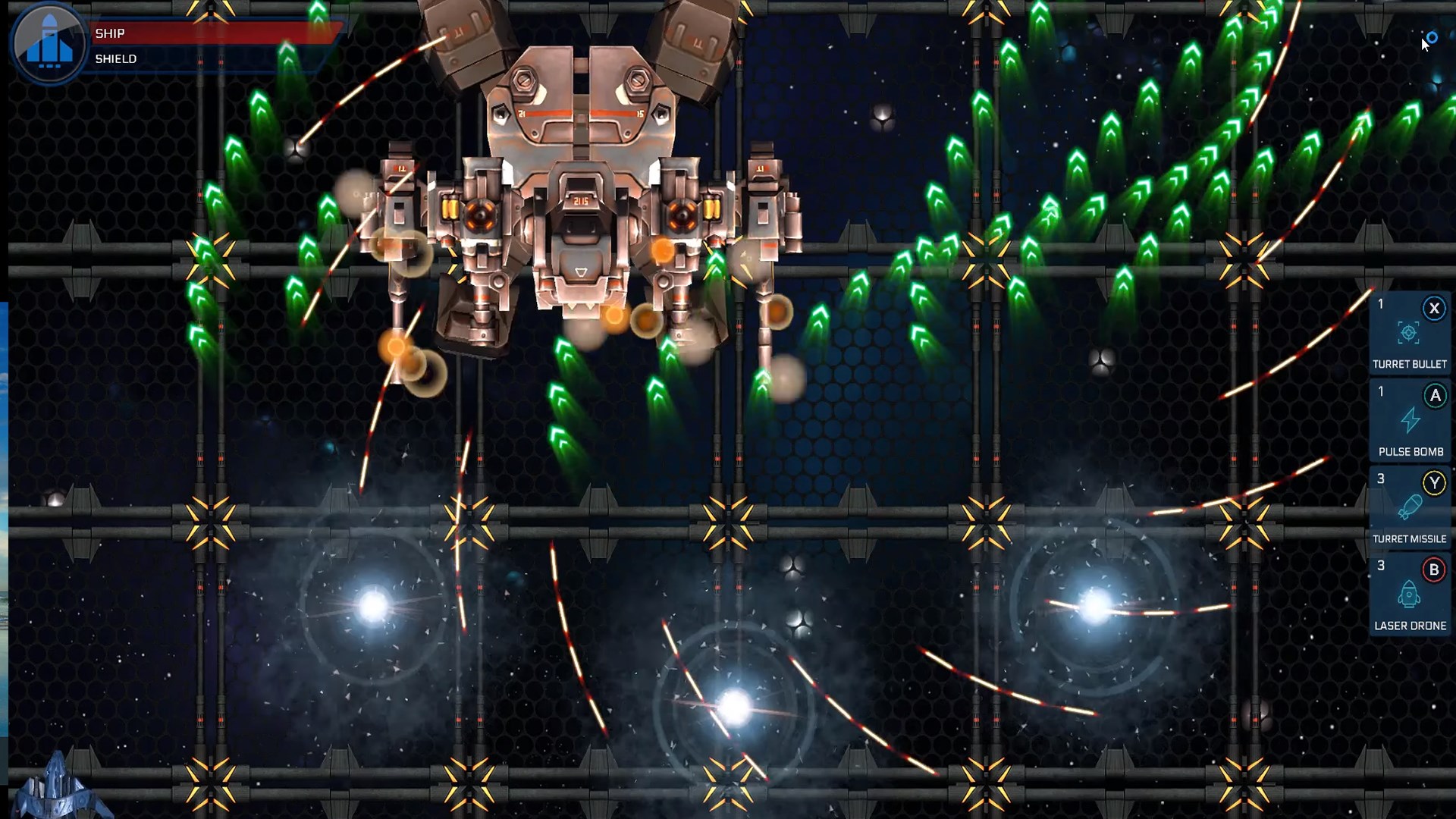 Over the many decades that I’ve been gaming, I’ve taken in a whole host of shoot ‘em ups. Fixed screens have come and gone, side scrollers have ruled the universe and vertical scrolling flyers have continued to draw us back; the latter of which saw optimum gaming goodness reached with the launches of Sky Force Reloaded and Sky Force Anniversary.

Since that time the hunt for shmups that are capable of taking the crown from the head of Sky Force has been real. Try as we might though, we’ve failed. Could X-Force Genesis be the answer?

Well, without spoiling things too much so early in the review, the simple answer is no.

X-Force Genesis is not the vertical scrolling space shooter you are looking for. In fact it doesn’t even come close to what could be considered as a decent genre offering. It lacks in nearly all areas – that is except in terms of the audio.

We’ll start with a positive and it must be said that the audio in X-Force is pretty decent. Usual shmup laser blasts help immerse you into the playzone, yet it’s with the upbeat, repetitive, backing soundtrack with which it hammers home. It’s loud, perhaps too loud, and it’s repetitive, perhaps too repetitive, but it gets the job done. At least that is until you reach any one of the five bosses which are found at the end of the short stages which make up the X-Force Genesis experience; that music ramps up again, with the devs turning the volume up to eleven and beyond. Is there a need to feel our eardrums exploding?

Visually it’s just about alright. This is far from a standout graphical spectacle, but it does the job required. Your ship is decently detailed, evolves as – the few – power-ups are gained and lost, and whilst elements are copy and pasted throughout, it’s all fine. Enemy variety is poor though; we’ve not marked a notch for each and every foe we’ve come up against here, but we’d be hugely surprised if it manages to roll into double figures.

What is there is also disappointing. All enemies follow set patterns that are easy to avoid; their fire equally so. Again, it’s not until boss battles do things get tricky, and then it just becomes a battle against frustration, mostly as unfairness raises its head. Rarely will you be able to react to a boss movement without shield and ship energy levels being fully depleted, and so you’ll be left to rinse and repeat, trying in vain to earn enough in-game coinage to be able to purchase an upgrade or special.

There are eight different types of these – yep, more ship upgrades than there are levels to play – but rarely does an upgrade feel like it’s making a difference. You could drop notches into your Shield, your power-up pick-up Magnet, or your Energy levels and not notice a jot of difference. In fact, you’d probably be best off saving your cash so you can purchase Power Shots, Turret Missiles, Pulse Bombs, Turret Bullets, or Drone Lasers. The problem with those is that the majority are one-and-done hits – after which you’ll probably be overcome by that unfair streak which is kicking through X-Force Genesis.

Repeating levels again and again will therefore need to be actioned, but the amount of cash you will earn whilst playing is miniscule in relation to the upgrades and special prices. Granted, none of the stages are lengthy, but there is only so often you can fly through the same stage over and over again, hoping you’ll find it within yourself to continue. Yep, the grid is real.

A bit of a saving grace is that hitting the left bumper at the start of any stage will action the auto-fire – at least you’ll not have to be manually holding that fire button down.

Even though the controls are fine, other issues also crop up. Hiding away in corners of the screen will see you fluking your way through stages, whilst we’ve found that dropped audio is an extremely regular occurrence; fixed only by going until the pause menu and restarting. It’s no real hassle to do that, but it does hammer home the sloppy feel that is slapped all over X-Force Genesis as a whole.

It’s also a bit of a pain to discover that Normal and Hard game modes (not that you’d particularly want to play them) are locked away behind completion of the Easy mode. When there are only five stages to play through and pretty much the full complement of 1000 Xbox Gamerscore and achievements nailed before that is over, enthusiasm to keep battling away through space is low. It’s all a bit disappointing really.

If you’re after a mindless blast through space and fancy hearing the constant ping of achievements as you go, the low asking price of X-Force Genesis is probably going to be enough to tempt you in. Don’t expect anything resembling a decent shoot ’em up experience though – this is a one and done Gamerscore hit that is rarely good for anything else.

X-Force Genesis is on the Xbox Store