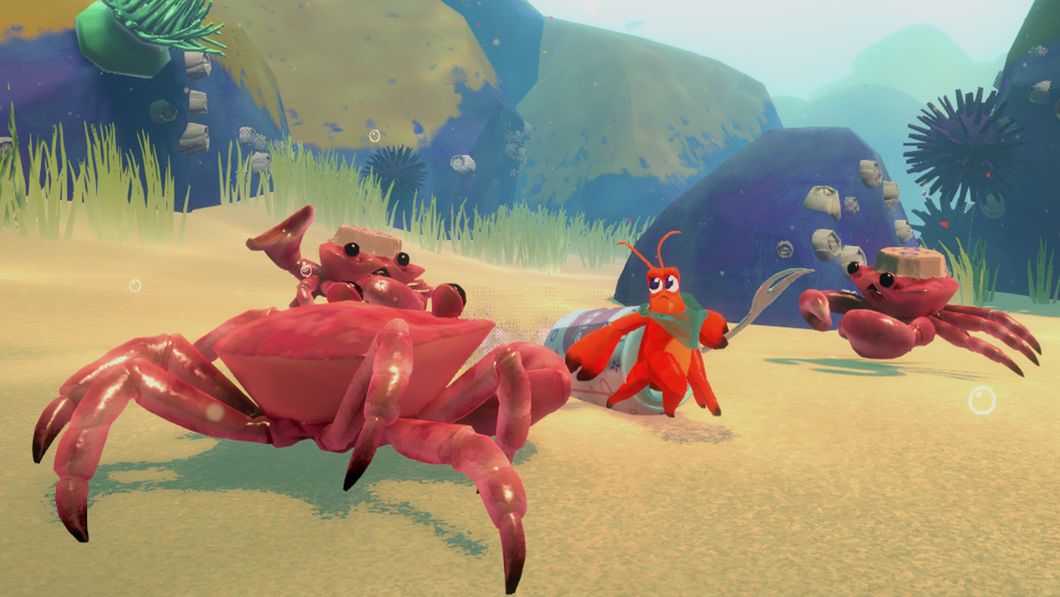 Aggro Crab is a studio that’s quickly built up an image of not being one to take itself too seriously. After its fluorescent satirical dungeon-crawler Going Under, where you battled the demons of failed tech startups, the studio published the equally bizarre ‘escape from a weirdo on a train’ game Subway Midnight. But the off-kilter themes shouldn’t belie the artistic merits of these games: they’re filled with striking visuals and great ideas.

With a small but solid resume of the strange and surreal under their belt, a Soulslike where you guide a lonely grab through a hostile but cutesy undersea world of sandcastles, baddies, and bosses is pretty much par for the course. That’s what we’ve got with Another Crab’s Treasure—a game that justifies its title by putting trash at the heart of the combat, as you pick up old hairline-cracked mugs, tin cans, and what I’m pretty sure are Yakult cups to use as shields, while old sporks apparently make fine weapons.

Now, I love the whole ‘Shellslike’ wordplay in the trailer—it’s what convinced me to cover this game in the first place—but it also seems to have a fair bit of 3D platforming, as the trailer shows the crab jumping between jellyfish and at one point reeling themselves towards a wall using some kind of grappling hook. The developers have confirmed that at the same time as making fun of the Soulslike formula it will also very much be a Soulslike game, with the challenges that that entails.

We don’t know if that means that each boss in the game will take 40 attempts to beat or whether the devs will balk at any suggestion of an Easy Mode. What we do know is that you’re on a quest to retrieve your shell, and along the way will seek to ‘bring down crabitalism’—goals that I think we can all get behind.

Another Crab’s Treasure has just popped up on Steam, but won’t come out until “Sometime in 2023.”