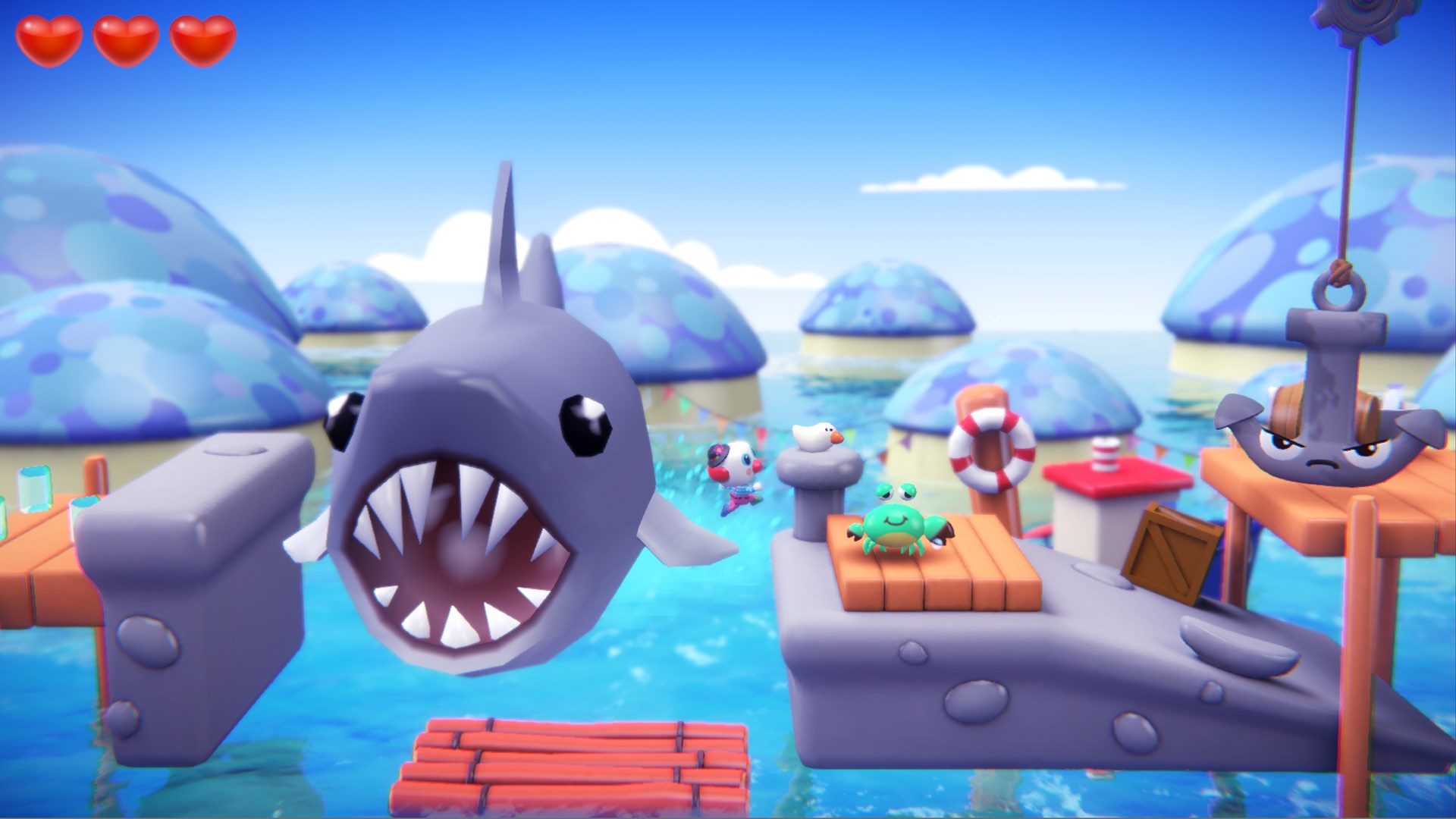 A clown wouldn’t have been our first choice to front a new platformer. But we suppressed our squeamishness and gave this one a go. We know: we’re so brave.

Ayo the Clown is a lavish platformer that, if you did a spot of de-making on the graphics, could easily have been a Donkey Kong or Yoshi sequel. It has the same addiction to bold colour schemes, as well as a ‘more-is-more’ approach to 2D platforming. If you loved the purple-patch of platformers on the SNES and N64, then Ayo the Clown may transport you back to that period.

We felt right at home. Levels are chosen from the traditional 2D, top-down map, with some minigames and towns to spice things up beyond just picking a level. The game is split up into worlds, from candy levels to factories, with four levels in each and a boss, dominating the width of the screen and requiring you to memorise various phases of attacks. It’s all been done before, but it’s familiar, satisfying and stuffed to the brim.

As the first game from developer Cloud M1, you wouldn’t know it was a debut. Graphically it’s got a high-quality if slightly plasticky sheen, making it feel more towards the AAA end than budget end. Some of the characters are a little bland, but generally this feels like being fired out of a circus cannon through world after world of colours, invention and giant gingerbread men. It’s a good looking game.

It hits some hurdles in terms of controls. Ayo the Clown is initially an easy character to get to grips with; his jump is easy to manage, and there’s no latency to any of the inputs. Basic platforming feels great in Ayo the Clown. But it comes undone as more and more abilities are layered onto Ayo. Soon, he is able to slide under doors, bottom-slam switches and float with balloons to higher platforms. The problem comes from that layering: too often, we wanted to climb down a rope but found ourselves bottom-pounding, or floating in a balloon when we wanted to be climbing up a ladder. Ayo the Clown can’t discern between some of the controls, and it can lead to unwanted deaths.

The floating balloons, used early and repeatedly through Ayo the Clown, are also a tad inconsistent. Mapped to a press ‘up’, they often trigger late or end early, and we found ourselves cursing the decision to put them on the direction pad. A press of a face button, an X or a Y, would have worked wonders. But too much is stacked onto the direction buttons, when you are using them frequently just to move about.

It’s something you can learn to overcome – we just wished we didn’t have to. Because the levels in Ayo the Clown are punching well above the belt. It’s not unusual for a level to have three or four new ideas rattling around inside it, which is far beyond what other non-Nintendo, non-Rayman platformers would attempt. Most would save them for one per level, thinking that was more than enough. We found ourselves switching between tanks, planes and rafts, often with rising lava, crushing boulders and gravity-shifts changing things up. It’s attention-deficit on the part of the designers, and it makes Ayo the Clown a constant surprise.

Adding to the quirkiness is the collectibles, which come in common gem varieties, but also lollipops, bears and extra lives. Gathering them unlocks benefits for Ayo, but – more importantly – they make the levels dense with secrets, and there’s barely a sequence of platforms that doesn’t have a secret wall or a far-flung ledge that seems impossible to reach. There’s certainly plenty of longevity here if you have the appetite for it.

But, to mangle something Ian Malcolm once said, “they were so preoccupied with whether they could, they didn’t stop to think if they should”. We couldn’t shake the feeling that some of the ideas felt a bit much. The tank and plane vehicles never feel completely satisfying to control, making them clumsy sequences that left us happy that they ended. A gravity-shoes sequence locks you to platforms if you’re close to them, but the rules of what ‘close to them’ means are hazy at best, and we found ourselves flinged into the stratosphere more than once. It makes sense that a game with so many ideas would miss with a few of them, but you would hope that they would end up on the cutting room floor, rather than the game.

Emblematic is a level that is covered in fog, but having reached the end, we couldn’t tell you why. The fog didn’t factor into the mechanics, and didn’t do much more than make things harder to spot. It seemed to be included just because it could, and that’s often a criticism of Ayo the Clown’s approach to ideas.

But there are certainly plenty of hits as you play through the levels, and we found ourselves joyfully bounding through the levels more than getting stuck on them. The basic controls are good enough to achieve a kind of flow, hopping from an arcing dolphin onto a crab’s head, and then waiting for a shark to stop jumping into the game screen so that we can nimbly use a pufferfish’s spineless belly to get to the end of the level. A flow like this is incredibly hard to achieve and many platformers don’t get there. Ayo the Clown manages it, more often than not.

Ayo the Clown is far from perfect. Its controls are clumsy, and it pulls from a toybox absolutely bursting with ideas that are as likely to be as bad as good. But it also has a puppy-like determination to please, and it’s that gleeful approach, mixed with some superbly designed levels, that makes Ayo the Clown more substantial than you might have expected. This is one for players still holding onto a love for Donkey Kong Country and Yoshi’s Island games.

You can buy Ayo the Clown from the Xbox Store