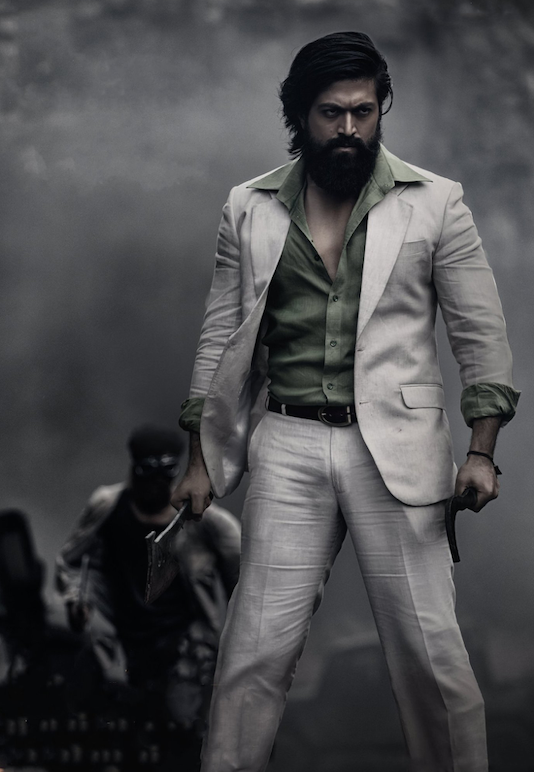 It takes a lot of confidence to wear a white suit to a fight in an open-cut mine. It takes something else — maybe an Avengers-style superpower, to repel dirt — to come out of said fight still gleaming, shirt collar tidily spread across those snowy lapels, shades on. Rocky, outlaw hero of KGF, has confidence to burn, obviously: When he tells a former U.S. president that he is the CEO of India, he isn’t joking. We know that for sure because, whatever else he does — fighting off would-be assassins, staging boardroom coups, buying off every politician in the Indian legislature or mashing heads with a mallet — Rocky, like his American namesake, doesn’t joke. He’s got stuff to do.

KGF: Chapter 2 (aka K.G.F.: Chapter 2) is the second half of Prashanth Neel’s action smash hit, arriving more than three years after the first on a hurricane of hype to a whistling, stomping reaction from fans the world over, and a $70 million-plus global opening this past weekend. Much of that enthusiasm is commanded by Yash, the smokin’-hot Kannada superstar who prances and punches his way through almost every scene as Rocky Bhai. Credit where it’s due, however: Neel pumps along his story — which is completely crazy — with every trick he can muster.

Jagged cutting, spectacular drone shots, a dramatically bleached color palette that gives the film the look and feel of a comic book, surging choreography involving what looks like thousands of extras, vicious and prolonged fights: this is the proverbial whopper with the lot. Above all, KGF 2 gives us an almost non-stop blast of noise; when the Kalashnikovs falter, Ravi Basrur’s unrelenting score surges to fill the void. It’s often exciting, for sure. It’s definitely exhausting.

The KGF of the title is a gold mine, an open-cut canyon teeming with enslaved workers, beyond which an industrial complex of fuming chimneys stretches to the horizon. An environmental catastrophe or, from another point of view, pure money. In the first film, the upwardly turbo-charged Rocky arrived in Karnataka from Bombay — where he began his working life as a shoe-shine boy — to kill Garuda, the chairman and hereditary owner of this El Dorado. He then installs himself as boss. Chapter 2 takes off from that point at breakneck speed. Rocky is on his way to becoming insanely rich and — mwah-ha-ha!! — a world-beating criminal mastermind.

It takes him just a few hectic scenes to crush the other family owners into submission, kidnapping the most glamorous of them, Reena (Srinidhi Shetty) and moving her into the best bedroom in his mansion — “for my entertainment” as he says, ominously, in English. The thousands of mine workers and their families love him immediately, partly because he provides them with food and clothes, but mostly because he’s so unutterably cool Reena will eventually love him too. Of course she will: issues of consent do not loom large in Rocky’s badass world. As one fan wrote in response to a negative review, this is not a film for women.

One problem with one-note action films like this one is that even the best of them tend to sag, sometime towards the middle of the second hour, under the weight of repetition. Neel’s solution at this point is to bring on a bigger, nastier and more picturesque enemy than the ineffectual police and posses of family retainers Rocky has faced off so far. Adheera (Sanjay Dutt), apparently the longstanding power behind Garuda’s throne, is a Mad-Masala brute who has modeled himself after the Vikings. Adheera is covered in tattoos, brandishes a sword and communicates largely by roaring. When he and Rocky fight mano-a-mano, it is a clash of testosterone titans.

Meanwhile, the tension tightens. Rocky’s other potential nemesis is the prime minister, played with impressive grit — often of her teeth, given that she has to convey power and determination with a mere handful of lines, this not being a film for women — by Raveena Sen. And there is another enemy skulking behind Adheera — the brain behind his brawn — revealed towards the end of the film in a cascade of information that is momentarily confusing, but dissolves satisfactorily into yet another deafening volley of bullets. Game over, my friend.

This is pretty much the way things go in KGF world. Even with the framing device of a narrator supposedly relating the whole story (sonorously delivered in this chapter by Prakash Raj), it is still easy to miss who is sabotaging or supporting whom, at least in the initial telling. Fortunately, key points are repeated, sometimes more than once, for the slower among us. And, actually, the details don’t matter much: the crucial thing is that Rocky Bhai is propelled, sometimes at speed and sometimes in slow-mo but always impeccably suited and coiffed, towards KGF Chapter 3. Which, I have every confidence, is even now hurtling towards us, full of sound and plenty of fury.