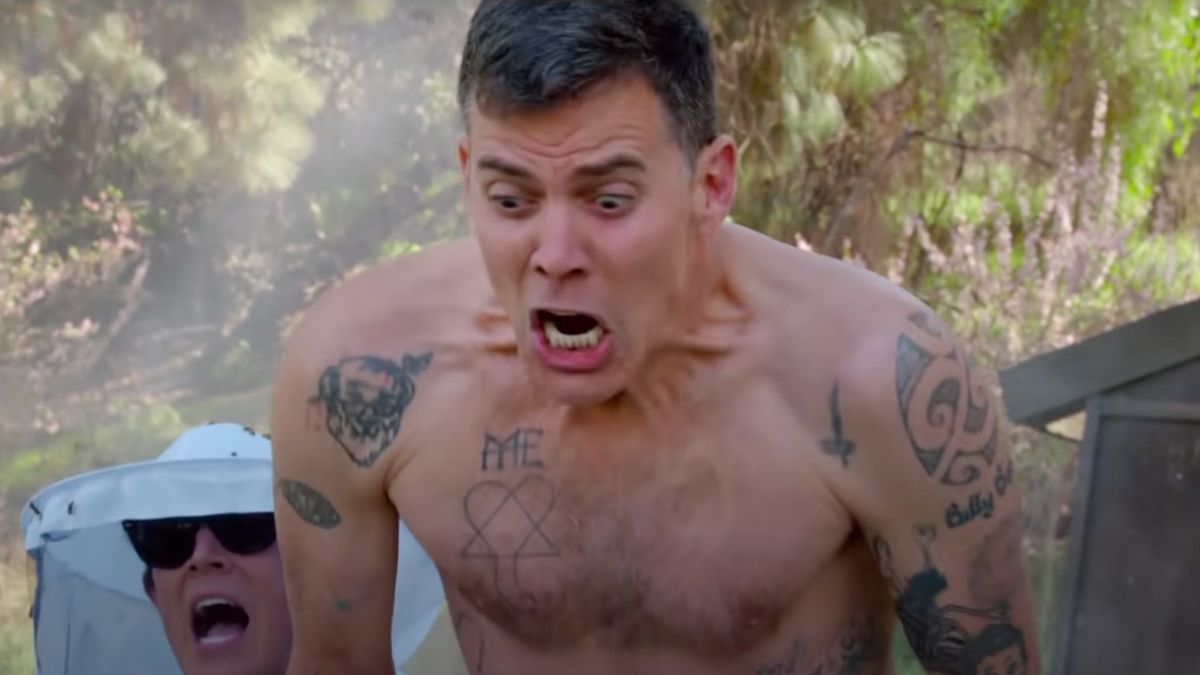 The Jackass crew just graced us with another installment of their reckless stunt franchise earlier this year in the form of their new film release, Jackass Forever. A lot of fans may have thought it would be the last time the now-middle-aged stars would indulge in their wild antics. However, franchise star Steve-O is apparently not only continuing his shenanigans but aiming to ramp things up. He’s opening up about the wild content he has planned, and apparently he would “never be allowed” to film it for his storied franchise.

Now, Steve-O has done some pretty insane stunts during his time with his longtime crew, including performing the all-time best Jackass stunt in Forever when he hung a hive of bees off his junk. I don’t know about you, but I literally can’t think of anything more intense than what he and the rest of the crew have put their bodies through, and I honestly don’t think I want to.

However, in an interview with Entertainment Weekly, the 47-year-old star revealed that he has big plans to do pretty much whatever he wants in his upcoming comedy tour, and that includes going under the knife and getting “the biggest fucking breast implants” that he can. Yeah, you read that right. Check out the other details he provided on the stunt:

Why?! Thanks to their stunts, we’ve seen the guys of Jackass get brain and ruptured testicles. Johnny Knoxville even broke his penis once. It doesn’t seem to be enough for Steve-O, though. The star has even admitted he wished some stunts would have been taken further. I can honestly see why these stunts would’ve been too intense for the MTV-birthed franchise.

I just want to say that thinking about watching the performer shoot himself in his face makes me extremely uncomfortable. A fish hook through the cheek is OK, I guess, but I am genuinely concerned about him utilizing a bullet in such a way.

Like many fans, Steve-O and the rest of the crew have been endeared to me, even if they have put themselves, literally, in the line of fire and hurt themselves to some serious extremes, with the star even having some severe burns on his body from a stunt. The guys have sacrificed a lot of themselves for both our and their own entertainment, but it’s kind of hard to imagine someone pretty much doubling down on the crazy stunts.

If the Jackass franchise has always seemed a little tame to you, it sounds like you’re in for some comedy gold when Steve-O launches his upcoming comedy tour. His Gone Too Far tour kicks off in about a week, and I’m keeping my fingers crossed that he stays as safe as his stunts allow him to be.

The Lord of the Rings: Gollum Is Looking Less Than Precious
How Behind the Frame’s animation makes you feel at home
‘DWTS’ Sharna Burgess Sells Home, Moving in with Brian Austin Green
The next Crusader Kings 3 patch makes the Visigoths vanish
Horizon Forbidden West and Cyberpunk 2077 PS Plus Game Trials Are 5 Hours Each