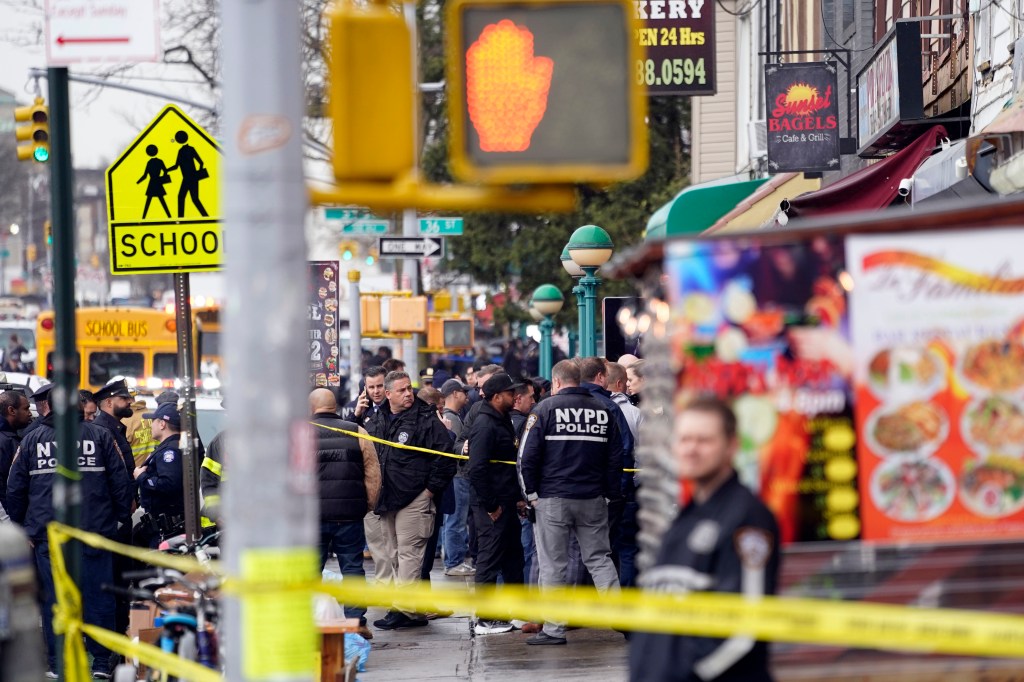 NYPD Chief of Detectives James Essig named Frank R. James, 62, as a “person of interest” in the case. The man, who has addresses in Philadelphia and Wisconsin, rented a U-Haul trailer that police linked to the crime by a key the suspect apparently left at the scene. Police found the rented truck in Brooklyn.

The manhunt has been given nearly nonstop given coverage on cable news today, and the suspect remains at large. He is described as a dark-skinned male, wearing and orange and green vest and a gray hoodie.

“We are truly fortunate that was not significantly worse than it is,” Police Commissioner Keechant Sewell said during the briefing.

Essig said police recovered a Glock 17 9mm pistol and three magazines at the scene, along with a hatchet, some liquid presumed to be gasoline, consumer-grade fireworks and a fuse, and two used and two unused smoke grenades. He added that the shooting victims included seven men and three women.

No motive for the crimes has been determined, but Sewell said, “Clearly this individual boarded the train and was intent on violence.”

With a suspect still at large, officials earlier described the incident as an ongoing “active shooter” situation. Police are asking for the public’s help with identification of the suspect, cell phone video or other clues.

“We in the NYPD have all of our resources working on this, along with our partners from the FBI and the ATF,” Essig said.

PREVIOUSLY: None of the injuries is considered life-threatening, officials said. Of the victims suffering from gunshot wounds, five are in critical but stable condition. The non-gunshot injuries could include smoke inhalation, a panic attack and “shrapnel” wounds from the gunshots or injuries sustained in the post-shooting rush of people.

Fire officials said the suspect was on the subway train near the 36th Street station in Brooklyn’s Sunset Park neighborhood when he donned a gas mask, took a canister from his backpack and set off some sort of smoke bomb. As the subway car filled with smoke, he began firing his gun.

Commissioner Sewell told reporters during an initial news conference just after noon in New York that the incident is not being considered as terrorism, she added later that nothing is being ruled out.

New York Gov. Kathy Hochul said during the briefing that she was committing “the whole resources of our state to fight this surge in crime.” She described the shooter as “so cold hearted and depraved of heart that they had no caring about the individuals that they assaulted.”

Another press briefing is expected later this afternoon for updates.

Earlier today, President Joe Biden has been briefed on the subway shooting, according to Press Secretary Jen Psaki, who said that White House senior staff are in touch with New York City officials to offer assistance as needed.

First responders reported that in addition to the shootings — which started on the train, and not, as earlier considered, the subway platform — they observed several suspicious devices or remnants, possibly the devices that filled the station with smoke prior to the shootings. The NYPD reiterated during the press briefing that there are no active explosive devices at the scene.

The shootings occurred just before 8:30 a.m. ET — rush hour — at the subway station or on the train in the area of 36th Street and 4th Avenue area in Brooklyn. “Shelter in place” orders were issued for several area schools.

Hochul tweeted this morning that she had been briefed on the incident. “First responders are on the scene and we will work with @MTA & @NYPDnews to provide updates as the investigation continues,” she wrote.

New York City Mayor Eric Adams, who has been in isolation this week after testing positive for Covid, was not on the scene in Brooklyn. New York city First Deputy Mayor Lorraine Grillo said Adams was coordinating the city’s response from his residence. “We will continue to throw all of city’s resources at this situation,” she said during the briefing.

Watch as NYPD Executives and City and State Officials provide an update on the shooting incident in Brooklyn. https://t.co/xGGlDJ6UQI

@POTUS has been briefed on the latest developments regarding the New York City subway shooting. White House senior staff are in touch with Mayor Adams and Police Commissioner Sewell to offer any assistance as needed.

In regard to the multiple people shot at the 36th Street subway station in Brooklyn, there are NO active explosive devices at this time. Any witnesses are asked to call @NYPDTips at #800577TIPS. Please stay clear of the area. More provided information when available. pic.twitter.com/8UoiCAXemB

I have been briefed on this developing situation in Brooklyn. First responders are on the scene and we will work with @MTA & @NYPDnews to provide updates as the investigation continues. https://t.co/dM2hKnhoql

Enthusiast Gaming’s largest shareholder launches public campaign for leadership and board changes
I regret to inform you Ni No Kuni’s cute new MMO has blockchain crap up its sleeve
Angelyne Says She Hates Anyone Playing Her, Doing Her Own Film Now
Sniper Elite 5 Review
Golden Sun – Did You Know Gaming? Feat. Smooth McGroove