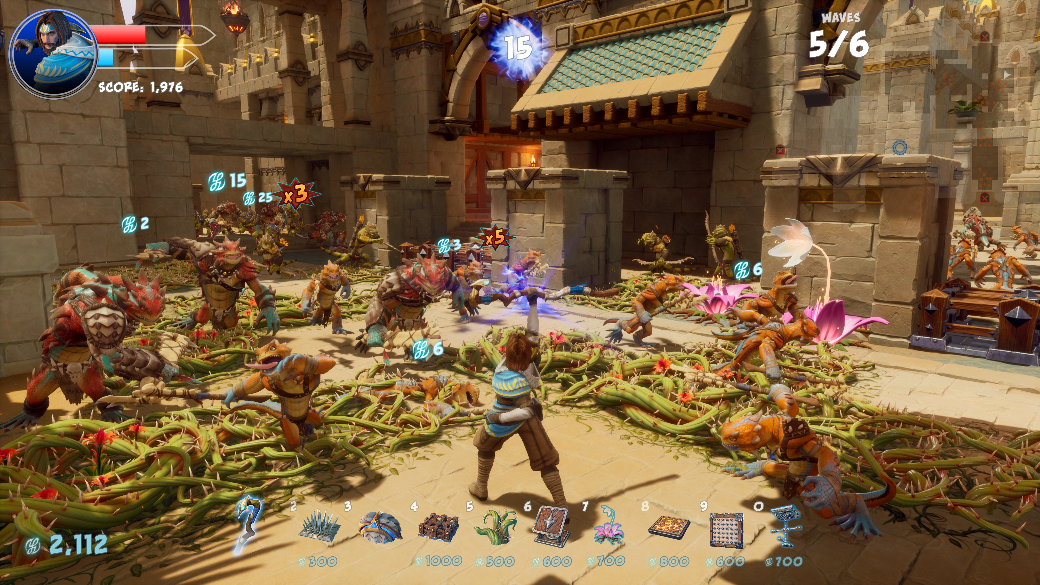 We fast became big fans of Orcs Must Die! 3 when it released on Xbox, PlayStation and PC in 2021. In fact, killing those Orcs with a variety of weapons easily helped pass a ton of time. So when Robot Entertainment continued to expand the base game with the Tipping the Scales expansion, we just had to find out more. Thankfully the Game Director – Jerome K. Jones – was on hand to fill in the details…

Hi, please could you introduce yourself, your role at Robot Entertainment and on Orcs Must Die! 3.

My name is Jerome K. Jones. I am the Game Director of Orcs Must Die 3 and the Design Director at Robot.

For those who haven’t yet played Orcs Must Die! 3, could you give a brief rundown on what players should expect.

Fast paced, action tower defense and 3rd person shooting. With lots of physics and humor. Basically, you must stop tons of orcs from getting past you. To do this you have vast amounts of traps, weapons, trinkets, and upgrades.

Honestly, we were really taken in by the release of Orcs Must Die! 3 on Xbox last year. How was the reception overall?

The reception has been great overall! We do tend to have some passionate fans, but they keep us honest.

It didn’t take you long to push out new ideas through the Cold As Eyes expansion. Could you explain how you went about creating that add-on?

There is definitely a top 3 requests from fans in the OMD world. More maps, more gear, more enemies, and in that order.

Design also tries to “fill holes” in the game as well as come up with new creative stuff. Sometimes we design trap ideas because there is a need for another trap to go on a specific surface or even a trap that goes well in a specific game mode.

Enemies come from brainstorms or from other enemies already in the game. Hence the Cyclops mage.

Maps? Well, by now we have done so many OMD maps that the hard part is the idea. Once we have that, we are pretty good at releasing new maps.

And that gets us to the tastily titled Tipping the Scales expansion – the most recent of add-ons. What should players expect to find in that?

As usual, more of everything.

The Tuatara race came out great and the art dept. knocked it out of the park with their look and animations. With both Cold as Eyes and Tipping the Scales, players want to take the new race abilities seriously. Race abilities are meant to make players try new things and get out of their loadout comfort zone. With the Tuatara specifically, players may want to rethink those high damage, expensive traps.

Also, the hand gatling is the fastest firing weapon in OMD to date and it’s just awesome to have the briar patch growing all over the place.

Where did the new Tuatara Race come from? Were they always on the cards through early development of the game? Have they evolved much through development?

Well, the name comes from an actual ancient reptile. Art took it from there and developed their look in game.

As for all the abilities, I have always wanted a stealth enemy. They were never part of the early dev of OMD 3 but one of the hardest parts when adding new enemies is making sure we maintain our sense of humor in OMD.

As I mentioned before, the Tuatara animations as well as their race ability, really make them a great addition to the OMD world enemy-wise.

Much of the enjoyment of the base game is the utilization of various traps and tactics. What’s new with Tipping the Scales? Do you have a personal favorite?

The Tuatara race ability should definitely change some player tactics.

As for a personal favorite, the briar patch has become a permanent trap on my loadout bar. I am still a Scepter of Domination weapon guy, but the hand gatling has been giving that weapon a run for its money recently.

A couple of new Endless mode maps are promised. How do Split Stairs and Secret Fortress play out, as well as fit into the whole Orcs 3 experience?

They are great maps for Endless. Most maps are once we get around to making the conversion.

I am hoping some players use more of the Secret Fortress map than they do in regular game play. Opinions from fans on Endless maps can vary widely. The fans seem to want very different things from one map to another in Endless mode. With Split Stairs I tend to use the rift room a bit more in Endless mode, which is nice.

In terms of the new scenarios, will players be looking to utilize their new found traps and tactics across the new options, or could they get away with tactics that have previously been successful?

The design of the gear given in Tipping the Scales is meant to help against the Tuatara race and their ability. As for old tactics, I don’t think we want to force people to change what they like to do, but we do hope our decisions can influence experimentation.

Also, in order to get 5 skull levels and get high scores, sometimes a change of tactics is necessary. It can really depend on your goals.

How important was it for you to add new Xbox achievements via the expansion?

Anytime we can give achievements to players, we do. It is always important to us. Especially for those completionist gamers who want it all.

Are there plans to expand things even more? Anything you can tease in terms of what may be on the table?

We are always talking about the future of our games but I really don’t have any spoilers right now.

And finally, how are you looking to move forward as a team. Is it more killing of Orcs that will be your primary push?

Specifically, the OMD team is starting to mumble a bit about what’s next. However, I would still not be able to let any cats out of the bag right now. I think it will always be safe for me to say that more Orcs will die someday.

Huge thanks go out to Jerome for giving us some time and for answering our questions.

If you’re an Orcs Must Die! 3 player, then we urge you to give the Tipping the Scales expansion a little look. You’ll need the base game – available on Xbox, PlayStation and PC – but from there the usual digital stores will cover the expansion purchase you need. The Xbox Store is our favourite.

Eidos Montreal Once Worked on a Final Fantasy Game Called Project W
REVIEW: HALO isn’t bad because it isn’t accurate, it’s because it lacks heart
First full SHE-HULK trailer reveals Tatiana Maslany as the jade giantess
Dirty Dancing’s Jennifer Grey Explains Why She Refused To Do Her Iconic Lift With Patrick Swayze Until The Day It Was Filmed
Paper Ghost Stories: Third Eye Open detailed for console and PC in 2023