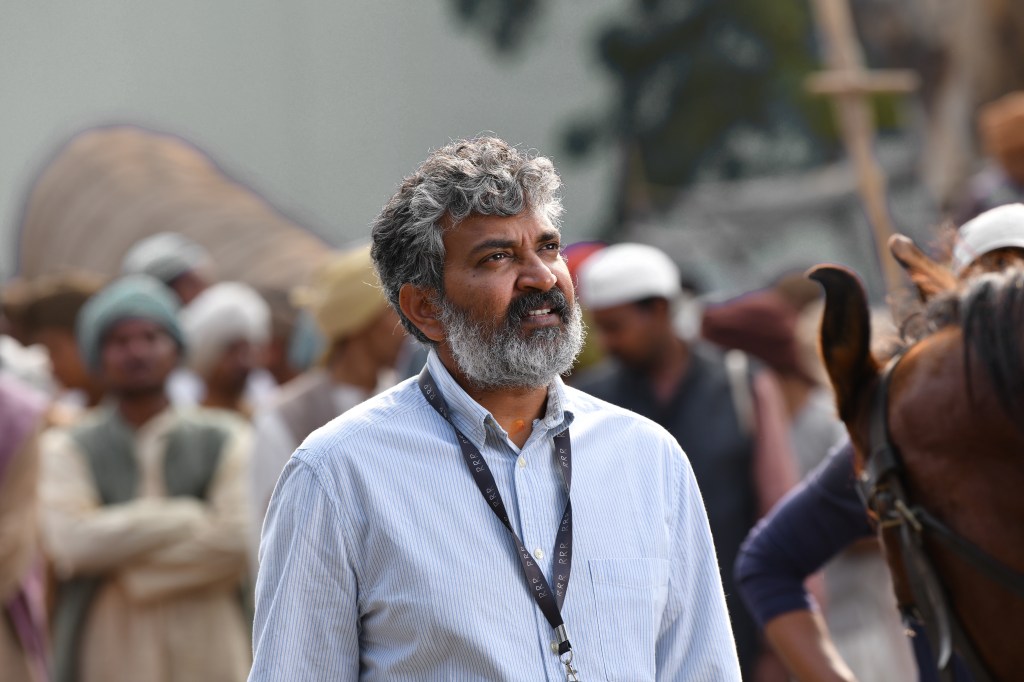 RRR, the latest epic from Baahubali filmmaker S.S. Rajamouli, has grossed over 960 crore ($126M) at the global box office in its first two weeks, and continues to grow. It is already the fourth biggest Indian movie ever worldwide and also gives Rajamouli bragging rights to three titles on the Top 10 chart of Indian films globally, more than any other director in the country.

The much anticipated film is a fictionalized story of real Indian freedom fighters and stars Jr NTR, Ram Charan, Ajay Devgn and Alia Bhatt. Praised for its grand cinematic scale, action and drama, RRR has also drawn comparisons to Marvel.

Deadline recently caught up with the filmmaker to discuss RRR‘s success, how Telugu cinema is breaking barriers and whether he might fancy a turn in the MCU.

DEADLINE: Given the success of the Baahubali movies, but also given the pandemic starts and stops you faced and the state of cinemagoing post-pandemic, were you surprised at all by the strength of RRR?
S.S. RAJAMOULI: No way. Simple logic says if we didn’t expect the success of RRR, we wouldn’t have spent so much on the project. It was simple math. We expected the success because of the kind of star power it had and coming after a long, long, long time — at least in India — and also the kind of emotional storyline that we had.

We were very sure of the film succeeding, and I say this always: We can be sure of the film’s success, but we can’t predict the range of success because it is dependent on so many factors which are not always in our hands. The success coming from unexpected quarters like the UK — where Baahubali 2 didn’t do so well — the success coming from other quarters is exhilarating.

DEADLINE: Your films have been a breakout for the Telugu industry, both in and outside India. How important is that to you?
RAJAMOULI: It’s very, very important because as a storyteller the biggest want is he should have the maximum number of listeners to listen to his story. And we are very greedy about it, we want more and more people to listen to our stories. All languages are of value, but it has been proven even before Baahubali, if the film is based on human emotions you can translate beyond the language. It’s the practical application of a theory.

It is really, really important for me because now I can expand even more. More and more films are going to come and cross these language barriers and tap into people across larger areas. Hopefully we grow beyond, not just in the country, but into other countries, other cultures, other languages as well.

DEADLINE: You released RRR in five Indian languages. Does working in different versions pose any particular challenges?
RAJAMOULI: My thinking is in Telugu, the script is in Telugu first. But even before I go to shoot, I send the script to other language writers so they also get into the clue of what the film is about. Those dialogues may not be the final ones I am going to use in the film, but they read the script and if there is anything that complements my story, I change the Telugu version. It’s an elaborate process because they write, but have to check with the lip-sync. You can’t have a 20 word sentence in place of a six word sentence. We get the lip-sync right, but we don’t compromise on the quality.

DEADLINE: You’re working on a big scale in terms of VFX, our review called it “bigger than Ben-Hur” with “one action crescendo after another, never dull but not exhausting either.” Are you planning to still go bigger?
RAJAMOULI: If you take any branch of filmmaking, if it’s photography and if people say the photography is bad, it is bad; if people say it is good, it is good. Same with music. But when it comes to visual effects, if they say the VFX is bad, it is bad; if they say the VFX is good, you are still average. You have good visual effects in the film if they don’t comment about it, so that is for me the biggest compliment in this film. (People are) talking about the big VFX moments in terms of the impact that it created, be it the sequence when he jumps out of the truck with all of the animals, or the interaction scene with Ram where he fights literally hundreds and hundreds of people. People are just talking about the impact that it created, but not one person mentioned how good the VFX was. So that was my biggest achievement. And yes, I will grow bigger and bigger.

DEADLINE: There have been some comparisons to Marvel and suggestions that you should direct an MCU movie. Is that something you would ever consider?
RAJAMOULI: For me, I grew up on the sensibilities of Indian superheroes, Indian mythologies, Indian historicals. I have a very good understanding about this world. Of course, I see Marvel movies, I like Iron Man, I love watching those movies. But I don’t think I’m capable of directing a Marvel movie because the sensibility is slightly different. Here, I’m more of an expert with these things. Probably in the future, I hope everything goes right and I bring my Indian stories, my Indian mythologies onto the level of Marvel or even more.

DEADLINE: In terms of your stories, with this one based on real history, how do you spark to an idea?
RAJAMOULI: When I get excited about a storyline I try to extract the maximum output out of that storyline. For me, the audience who are going to come to the film have to be as excited as I get. So for that, whatever needs to be done I will do it. It can be an historical story, it can be a completely fictionalized story about historical figures like RRR. For me, the story worked so I went ahead and did it. I know that there are hundreds and hundreds of folklore, historical, mythological stories in India and 90% of them have a capacity to become a big-budget action drama on screen. But the wick has to be lit. And if it happens, I don’t look back, I just go ahead and do it.

DEADLINE: Finally, a question about the unique title, how did that come about?
RAJAMOULI: It’s funny because when we announced the title it was just the first letters of our names as a working title, but the audience and the fans loved it so much that in their minds they fixed RRR as the title. They started making designs of the RRR and I asked the distributor and they said it’s very easy on the tongue, let’s go ahead and do it.