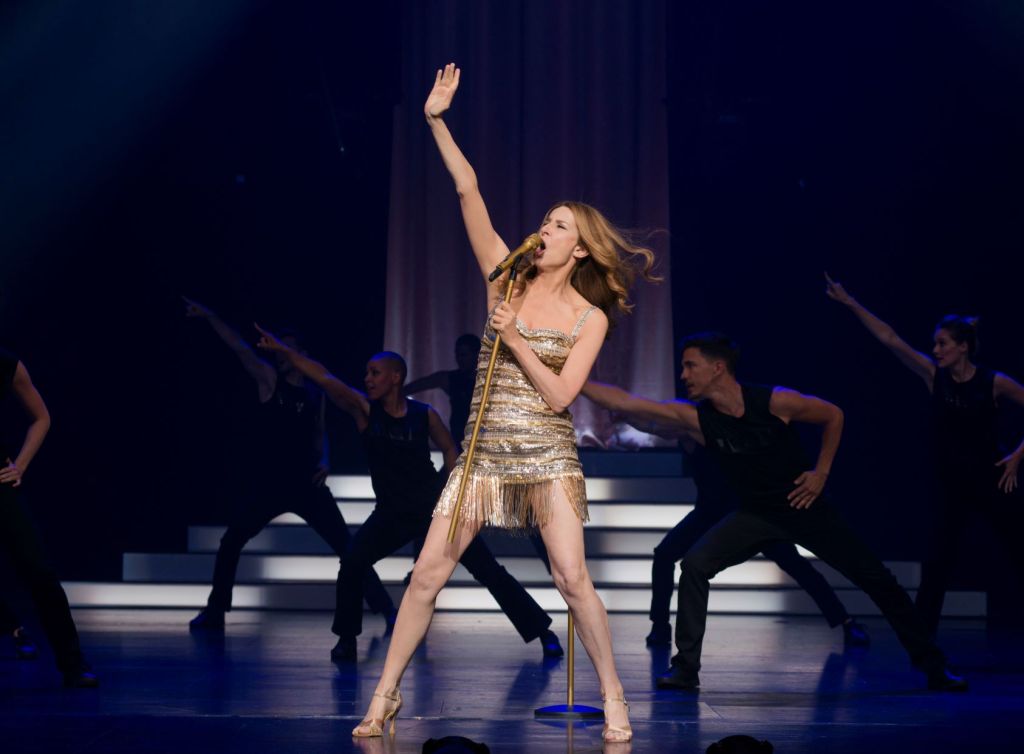 The face of five-year-old Aline looks weirdly mature and toothy as she crawls from under a table at a family wedding to belt out a song early in the film of the same name. French comedian and actress Valérie Lemercier, 58, wrote, directed and stars in Aline and it’s her head on a body altered by special effects in that scene. Roadside Attractions and Samuel Goldwyn Films open the “fiction freely inspired by the life of Céline Dion” in the U.S. this weekend.

Lemercier, a big star in France, won Best Actress at the César Awards in February for the film, where she lends the Canadian-born pop idol a Kristen Wiig-ish vibe. Aline premiered out of competition in Cannes last year. The U.S. release was pushed from an initial date in January.

The story follows Aline Dieu, the youngest of a hardworking, musical French-Canadian couple’s 14 children — a kind of bigger, poorer von Trapp family. Her voice propels her from local phenomenon to global music superstardom and into two great romances: with her manager and husband Guy-Claude Kamar (who died in 2016); and with her adoring fans. In the film, Karam is named René Angélil and played by Sylvain Marcel.

“The biopic is a standard cliché in Hollywood that is by definition conventional,” said Howard Cohen. Roadside co-president. “This is eccentric, in a good way. We weren’t expecting it in Cannes, but were really impressed by the treatment of the subject from a very unique angle.”

It opens in 15 markets on 61 screens and will move to 150-200 next week — a mix of arthouses for foreign language and multiplexes for Céline Dione fans. “An audience that loves her, that also goes to French movies? It has to have some overlap. But I don’t know if they’d go [Dion fans] if they’ve never been to subtitled movie,” said Cohen. “We have modest expectations but I think there’s an upside because of Céline.”

Parasite and Worst Person In The World had younger demos coming out for foreign language films. But Céline doesn’t skew particularly young. Titanic and its Oscar-winning theme song came out in 1997. ‘My Heart Will Go On’ is one of many musical numbers Lemercier’s Aline performs in the film, dubbed by Victoria Sio.

Elsewhere in specialty: IFC Films presents Cow on 35 screens. The distributor describes this documentary by Andrea Arnold as “an intimate portrait of one dairy cow’s life” that “highlights the beauty and challenges cows face, and their great service to us all.” The cow is Luma and the film – which scores 94% with critics on Rotten Tomatoes — is from her perspective. See Deadline review.

Greenwich Entertainment presents Theodore Braun’s Gustavo Dudamel documentary ¡Viva Maestro! about the young Los Angeles Philharmonic music and artistic director, and one of the few conductors who’s a real pop culture icon. He also leads the Simón Bolívar Symphony Orchestra in his native Venezuela. which has been roiled by political and economic unrest under President Nicolás Maduro. The film focuses on a period in 2017 when the government canceled Dudamel’s international tours with Simón Bolívar in the midst of deadly protests across the country. It opens in New York (Film Forum) and LA (The Landmark) this weekend, expanding next.

Film Movement presents Sergei Loznitsa Donbass as the winner of the Best Director Prize at the 2018 Cannes Film Festival – Un Certain Regard finally gets a U.S. release. The black comedy is set in the Donbass, a region of Eastern Ukraine that is now on the news daily. It follows a hybrid war involving an open armed conflict alongside killings and robberies on a mass scale perpetrated by separatist gangs in a world where propaganda is uttered as truth, hatred is declared to be love and life is suffused with fear, suspicion and fake news. Weeklong engagements in four theaters: IFC Center in NYC, the Laemmle Monica 4 in Los Angeles, The Clairidge in Montclair, NJ and the Pageant Theater in Chico, CA.

Amazon Studios opens All The Old Knives by Janus Metz starring Chris Pine in theaters (not clear how many) and on Prime Video. Deadline review here. Veteran CIA operative Henry Pelham (Pine) is assigned to root out a mole from among his former officemates at the agency’s Vienna station. His investigation reunites him with his one-time colleague and ex-lover Celia Harrison (Thandiwe Newton).