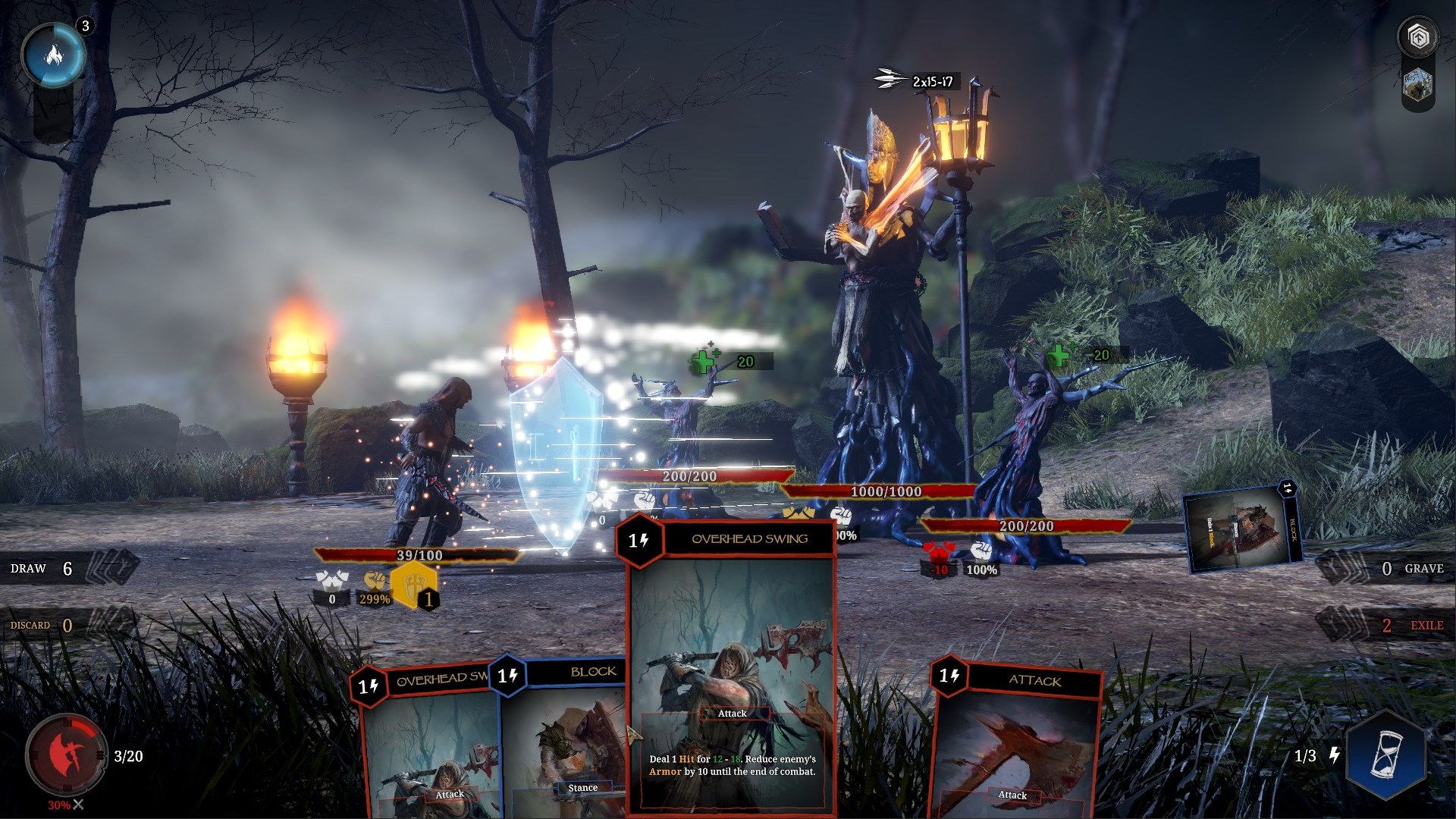 I’m sure that most of you have been spending a lot of time lately wondering where all the turn-based, roguelite deck building games based on Arthurian legends combined with Celtic mythology, horrific dark fantasy themes and Nordic folk music are. I know I have. Funnily enough, Tainted Grail: Conquest landed on Game Pass around the same time, so it seemed only pertinent to give it a go and while I initially expected to have a good time with it, I approached with caution, knowing how swiftly these types of games can consume your free time; when a man plays a roguelite deck builder, he murders some part of his Elden Ring playthrough.

At first glance, Tainted Grail: Conquest looks to be yet another entry in what could be considered an increasingly crowded genre. Roguelites, deck builders, and combinations of the two seem to have been popping up all over as of late, and with brilliant examples like Slay the Spire and the underrated Monster Train filling the niche quite comfortably, it would be easy to overlook Tainted Grail. Easy, but foolish. It’s easy for me to say, because I’m exactly the target audience for a game involving demented Clive Barker-esque monsters and fantasy mythology, but I don’t think that Tainted Grail quite puts its best foot forward when you first begin playing.

The game begins with some fantastically voice acted, well-written dialogue that evokes a nostalgic feeling of childhood fairy tale audiobooks, or of the great 90s school of CRPG voice acting witnessed in the likes of Baldur’s Gate or Icewind Dale, it’s seriously brilliant stuff – the story is grim and is told wonderfully (seriously, I can’t praise the voice acting enough) and I was instantly absorbed.

However, launching into the tutorial was a slightly less pleasing affair; the controls are a little bit fiddly, initially, cards are selected from the bottom of the screen with the left stick, while the D-pad is used to highlight various UI features dotted all over the place, or to select items from the player’s inventory. It doesn’t sound bad, but something about it just seems a little clumsy and it certainly felt like the game was intended for a mouse and keyboard.

While I was getting to grips with which buttons and sticks do what, I missed some of the rather inconspicuous tutorial messages popping up on the right of the screen. This wasn’t a huge negative (and was certainly partially my own fault), by any means, as the game is fairly easy to get to grips with and after a couple of battles I was flying through the user interface with ease, however, as I am about to spend the remainder if this review praising Tainted Grail to the high heavens, I felt it only fair to get this nitpicky detail out of the way.

Once the tutorial battle is out of the way, you are sent to the village that will serve as your hub area for your many, many runs through the game. Initially containing not much of anything, you will recruit NPCs to populate your little hamlet as you explore the dank environments surrounding it, most of whom act as shopkeepers and skill trainers, but for now you will have little to do but head into the wilds.

Exploring the woods outside the safety of your village is a disorienting affair at first – the environment is little more than a dark blur, owing to an evil mist called the Wyrdness. The player is given a stock of ‘wyrdcandles’ with which to help explore the murky, enemy-strewn maze; lighting one of these candles will repel the Wyrdness for a few minutes, allowing better vision and providing a better idea of the threats that lay down every single path. It’s a dangerous world out there, and you’d better be prepared to know when to hold ‘em and certainly when to fold ‘em if you plan on surviving more than five minutes.

Tainted Grail’s battle system is great. There are nine classes to choose from, only one of which (the Wyrdhunter) will be initially unlocked, although the others unlock fairly quickly. The player has a deck of cards, which will be added to as you progress through the game, and are randomly shuffled into your hand at the beginning of each turn. Each card requires energy to play, your energy is fairly limited, so strategic thinking is the order of the day if you wish to come through battles unscathed. Most of the game’s systems will be fairly familiar to anyone who has played this type of game before, and the starter class is quite straightforward, perhaps even a little vanilla, so getting to grips with the combat should be quite easy for most players.

Your job is to roam around the woods, battling abominations, recruiting villagers and upgrading your character in order to kill the four guardians, or die trying. Death is only the beginning, though; upon perishing, you will be returned to the character select screen, given a buff and a pat on the head, and sent on your way back to your bleak, hellhole of a village to try again; only this time you keep any permanent upgrades earned in your previous run, as well as new cards added to your deck, meaning that each subsequent playthrough gets that little bit easier.

Fortunately, the game starts to open up really quickly. The second class unlocked, the Summoner, showed how versatile Tainted Grail’s combat system is, as it totally changed the playstyle and strategic thought process behind the combat system. While it would have been easy to write Tainted Grail off as fairly generic from playing as the barbarian-esque Wyrdhunter, the Summoner turned battles into a cerebral, tactical game of managing various minions, utilising their skills, levelling them up, buffing them, and outthinking the enemy. It was a wonderful change of pace, and really shook the game up.

Next came the Sentinel class, a squishy archer whose shadowy double mimics his every move, and the combat switched up again. The remaining six classes don’t change the game up quite as much as their predecessors, but the battle system in Tainted Grail is incredibly versatile and can easily keep you going for hours just trying new combinations of cards and new strategies.

All of this without even mentioning what is probably the game’s best feature; the writing. Tainted Grail has a well told story, but the NPC storylines and dialogues are what really shine; each character has grim tale to tell, whether it be a candlemaker who makes wyrdcandles using means that are so repulsive he refuses to even expand on what they are, or a seamstress who uses her long, sharp fingernails to sew your wounds back together.

The NPCs are weird and wonderful, their stories fascinating, and the voice acting on the whole top notch. Combined with an incredible musical score from some of Nordic folk’s best and brightest (check out the game’s spectacular boss theme Reida by Danheim to get an idea) Tainted Grail: Conquest exudes a mucky, miserable atmosphere that makes you feel like you need a shower, but in a good way. If you are a fan of roguelites, deck builders, Arthurian mythology or just love the kind of games and films that leave you feeling a little bit soiled when you’re done, you could do far worse than checking Tainted Grail: Conquest out.

Tainted Grail: Conquest is downloadable from the Xbox Store