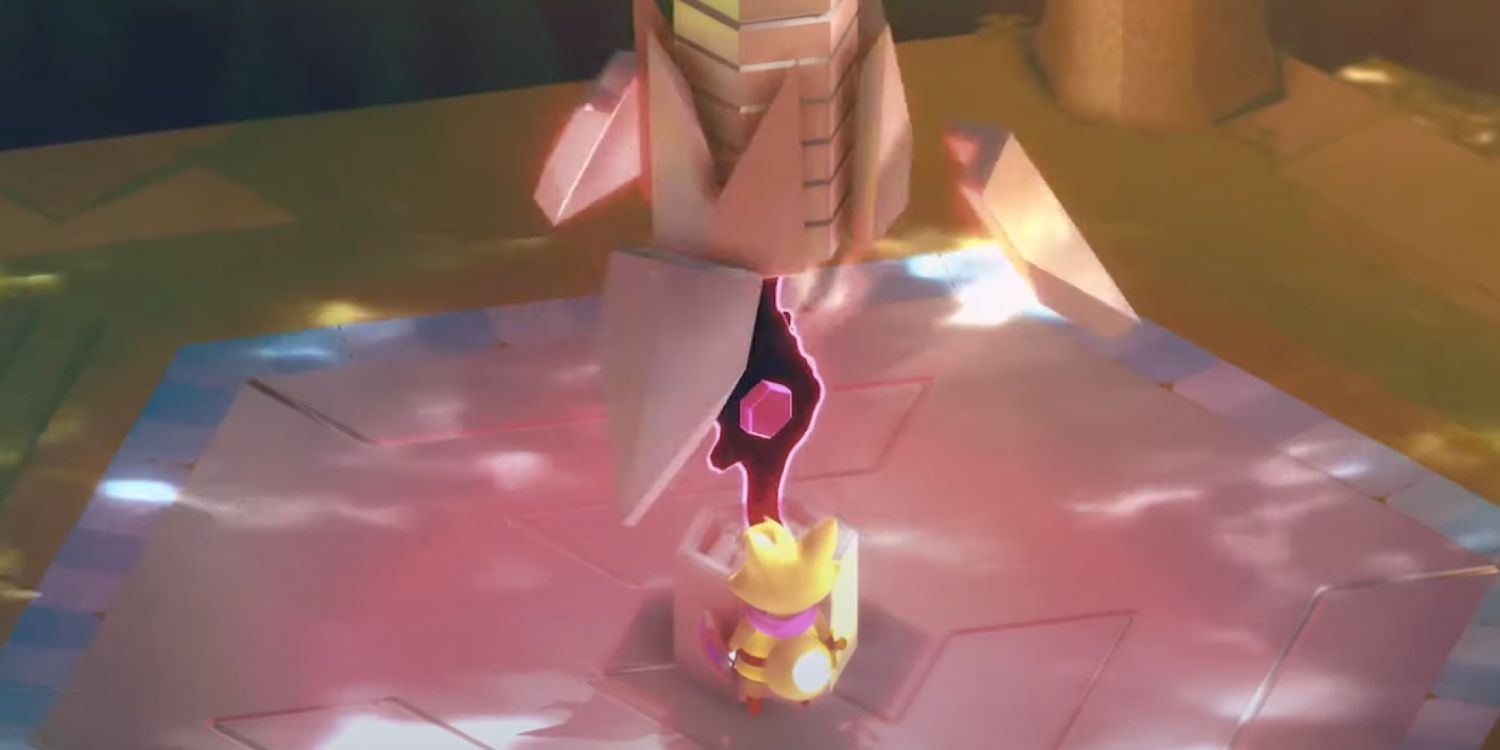 To complete the main story in Tunic, players will need to collect three colored gems, including the red one located in the Eastern Vault. Each gem the fox needs to collect in Tunic is guarded by a powerful boss, like the Siege Engine guarding the red gem. Finding all three can be difficult and time-consuming, and there are also other secrets to discover along the way.

After completing the objective to ring the bell towers, players will be able to enter the Sealed Temple. Inside, there will be three pedestals surrounding a large opening with shapes floating above it. The red, green, and blue gems need to be placed on the pedestals to progress in the story. It’s recommended that players go after the green gem first as it leads to unlocking a new magic item in Tunic. In the Frog’s Domain, players will find the magic orb, which allows the fox to pull enemies closer and utilize grappling points.

Related: Tunic: How to Activate & Use Warp Points

If players have collected page six of the instruction booklet, they’ll see a hint indicating that the red gem is in a forest temple. To get started, players will need to go to the eastern side of the overworld and use the entrance north of where the East Forest is labeled on the map. To gain access to the Eastern Vault and fight the boss for the red gem, players will need to activate a series of pillars in the Fortress of the Eastern Vault.

Players that have thoroughly explored the overworld, particularly the beach, will likely have page 32 of the instruction manual which shows a map of the Fortress of the Eastern Vault. The map can be collected from the beginning of Tunic by heading down the path behind the windmill. It shows seven pillars that need to be activated by praying, an action that the fox will perform when the dodge and run button is held down for three seconds. The first two pillars are in the entrance room, then players will need to take the ladder across from the fox statue to enter Beneath the Eastern Vault.

The path for Beneath the Eastern Vault should be straightforward. It’s dark and there are a spider enemies to defeat, but there will be a few pillars to activate along the way, so players can follow the pink strip on the ground leading to and from each one. There’s also a map of this underground area on page 30 of the instruction booklet. Going through the underground passage will eventually lead back to the previously inaccessible pillar in the main room. There’s a bridge that can be lowered before dropping down to fight.

There are a few enemies surrounding the pillar, including a larger one that swings candelabras. At this point, players should have a few stats upgraded in Tunic, so these creatures shouldn’t be too hard to defeat. After they’re dealt with, the fox can pray at another pillar which will feed power to the one beside the golden door. Inside the temple, players can pray at the pillars on either side of the golden door to open it and reach the boss fight with the Siege Engine.

Defeating The Siege Engine In Tunic

The Siege Engine in Tunic can be tough, but it also has two vulnerable spots, unlike other bosses in the game. The Siege Engine can be damaged by hitting its face or the glowing capsule behind it. It’s much easier to hit the Siege Engine’s face, but players will deal more damage if they can manage to rush behind it and hit its backside. Getting behind this difficult boss will also help with dodging because none of the Siege Engine’s attacks go behind it. However, there are some attacks, like the bombs, that can still deal damage if the fox is close enough.

To win the fight, players should use a mix of ranged and melee attacks and stay behind the Siege Engine as much as possible. Once the Siege Engine is defeated, it will drop a rod that can be placed in the platform down the stairs from the boss arena. Placing the rod will cause the floor to shift, and the red gem will be revealed. The fox can collect this gem and move on to the next step in completing Tunic.

Next: Tunic: How to Survive the Quarry