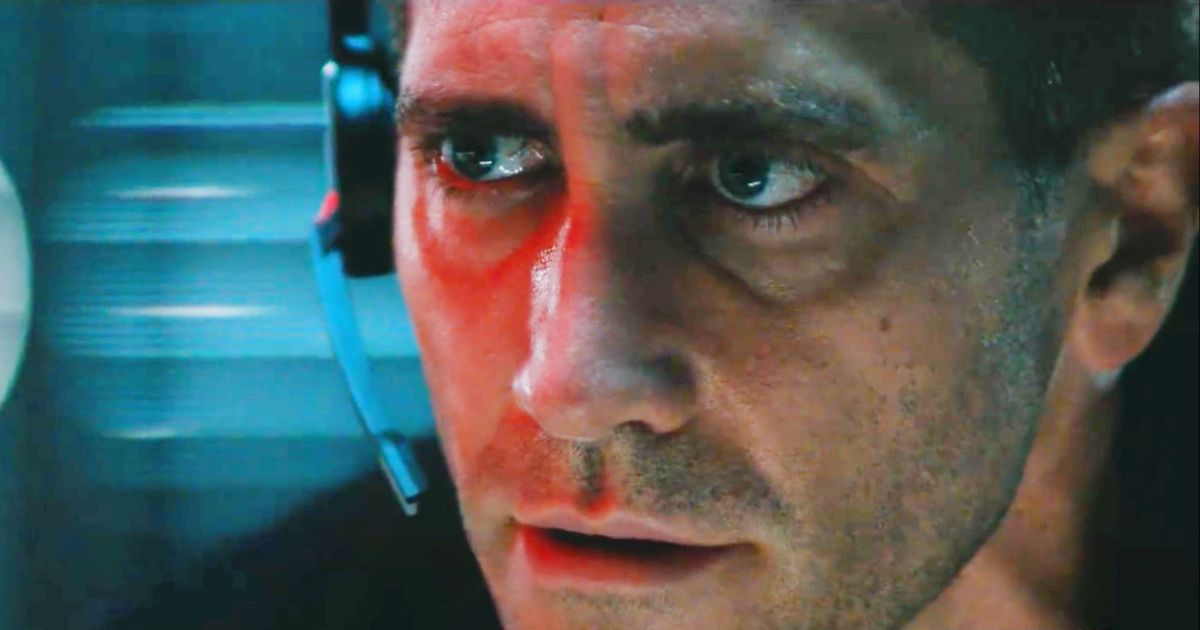 The epic streaming giant Netflix is no stranger to exciting and cutting-edge content, and their library of compelling thrillers is no exception. Some of the most spine-tingling and gripping pictures are a part of the ever-growing collection of Netflix movies, featuring Hollywood’s most innovative storytellers and dynamic performers. Whether you’re in the mood for watching Kevin Bacon portray a marvelously menacing bad guy in Cop Car, Jake Gyllenhaal as a troubled 911 call dispatcher in The Guilty, or witnessing the disturbing and thought-provoking international Spanish horror thriller The Platform, Netflix is sure to scratch your movie itch.

Netflix knows how to put out stimulating and intriguing titles, and the juggernaut continues to become home to a plethora of diverse and colorful content. No matter what kind of pulse-pounding flick you’re looking for, the popular streaming service has you covered. These are the best thrillers on Netflix right now.

The 2021 crime thriller The Guilty stars Jake Gyllenhaal as a demoted police officer assigned to a call dispatch desk who finds himself conflicted when he receives an emergency phone call from a kidnaped woman. It is a remake of the 2018 Danish film of the same name, with the actor having acquired the rights and producing the picture as well. The thriller takes place over the course of a single morning with Gyllenhaal’s troubled character officer Joe Baylor realizing nothing is what it appears, as he finds himself forced to face his own demons head on.

The Guilty was streamed in 69 million households over its first month of release, and was the top- watched film on the platform in an astounding 91 countries. The tense thriller and Gyllenhaal’s portrayal earned positive reviews from critics, with Time Out writing, “If you come to this Netflix remake first, you are going to be blown away by a hurricane-force performance from Gyllenhaal.”

Hermione Corfield stars as an overachieving college student who becomes lost while on her way to a job interview and finds herself being hunted by two criminals in the 2018 crime thriller Rust Creek. The gripping layered drama follows the young woman as she fights for her life in the brutal elements while being pursued by the ruthless outlaws, eventually finding help in the form of a mysterious loner with questionable intentions.

Rust Creek premiered at the Bentonville Film Festival and was favorably received by critics, earning numerous accolades like the award for Best Thriller at the San Diego International Film Festival. Upon its release, the taut film spent more than a week on Netflix’s Top Ten Movies list. Corfield was lauded for her gripping breakthrough performance as the fearful yet determined student, and Wicked Horror commented, “Written, directed, and fiercely led by women, Rust Creek’s an empowering if slight tale of strength, struggle,and human perseverance.”

Matt Palmer directed the 2018 British thriller Calibre, which follows two friends on a weekend hunting trip in the remote Scottish Highlands who find themselves in a nightmare situation that ends up testing both their nerves and morals. The edgy picture stars Jack Lowden and Martin McCann as pals Vaughn and Marcus, with the former actor portraying the everyman role as expectant father Vaughn, who finds himself at odds with the shocking actions of his aggressive and tightly-wound best friend.

The project was nine years in the making for Palmer, who drew inspiration from 1972’s Deliverance by fully utilizing the rugged and wild open landscape, setting a menacing ambiance. Palmer chose the Scottish Highlands to help craft a truly nail-biting atmosphere for the hunters and an added layer of dread, “It’s just the isolation you get up there. I think in some areas of the Highlands there’s sometimes three police for three villages in a 50-mile circumference. And that opens up the possibility of stuff happening that just could not happen in the city.”

5 Coming Home in the Dark

The 2021 New Zealand psychological thriller Coming Home in the Dark is an electrifying and menacing movie that centers on a schoolteacher who is forced to address a brutal act from his past when a pair of sadistic drifters take his family and him on a frightening road trip. Featuring the talent of Daniel Gillies, Erik Thomson, and Miriama McDowell, the spine-tingling picture follows the family as they come to the terrifying realization that their seemingly random encounter with the sociopaths was set in motion two decades earlier.

James Ashcroft’s directorial debut, Coming Home in the Dark premiered at the Sundance Film Festival to rave reviews, with many appreciating the director’s incredible storytelling and enthralling take on trauma and its domino effect. Ashcroft told ScreenHub, “I wanted it to be an entertaining ride, a gut-punch of a ride, and enjoyable from a genre perspective. But one that also allows you to unpack some tricky material about New Zealand and some of the historical failings we need to face.”

Hollywood great Kevin Bacon headlines the 2015 road thriller Cop Car, portraying a corrupt sheriff who sets out to hunt down two juvenile delinquents who hijack his abandoned police cruiser, after having stashed a hostage in the trunk. Bacon is superbly menacing and downright chilling as the shady Sheriff Kretzer, who will do anything in his power to acquire his vehicle and the dangerous adversary trapped within it. The actor is joined by his real-life wife Kyra Sedgwick in the slick thriller, in which she appears as Kretzer’s dispatcher Mary Allen.

On performing the bad guy role, Bacon said, “I have a great time, but it’s not because the guy is bad or good. I have a great time because the character’s interesting and complex, and that applies to a good guy, too. If a guy has something fun about him, for me to play something I can sink my teeth into: that’s my happy place.” Despite failing to become a commercial hit, Cop Car earned praise by critics, who commended the film for its impressive performances and rousing twists and turns that puts audiences on the edge of their seats.

Jeremy Saulnier’s 2018 action thriller Hold the Dark is based on the William Giraldi novel of the same name and tells the story of writer Russel Core, who is hired by the mother of a missing 6-year-old to track down her son in the remote Alaskan wilderness. After the death of three children whom the town suspects were killed by wolves, the desperate parent begs Core (who studies wolf behavior) to bring her son home. While he faces the treacherous and rugged wild terrain, Core begins to realize a bigger and more harrowing mystery is at play, and it’s up to him to get to the bottom of it.

The thriller features an impressive cast including Jeffrey Wright as Core, Alexander Skarsgård and Riley Keough and follows the lonely trio as they descend into the heart of the darkness. Hold the Dark is an absorbing film full of chills and thrills, with the Daily Beast writing, “Wright’s disturbed visage conveys his character’s torn-between-two-worlds distress, with the actor using darting looks and burdened body language to beautifully articulate the war raging within.”

The 2019 Spanish social commentary and sci-fi horror thriller The Platform takes place in a vertical prison with one cell per level, whose residents are switched every 30 days between the various floors; this system inevitably leads to conflict as the prisoners housed in the upper cells are fed, while those below starve. The Galder Gaztelu-Urrutia flick’s key message is that “humanity will have to move towards the fair distribution of wealth” and explores the importance of individual initiative while critiquing capitalism and socialism.

The Platform is a gut-wrenching and jolting picture, with Gaztelu-Urrutia acknowledging that it’s difficult to watch due to its brutal violence and cannibalism but said the prison’s “hole is a reflection of our society, so it couldn’t hide the violence. It had to show how we rip each other apart.” The dystopian thriller premiered at the Toronto International Film Festival where it won the People’s Choice Award for Midnight Madness.

1 The Killing of a Sacred Deer

The insanely talented Colin Farrell and Nicole Kidman star in the 2017 psychological horror thriller The Killing of a Sacred Deer, which is based on the ancient Greek tragedy Iphigenia in Aulis by Euripides. It centers on cardiac surgeon Steven Murphy (Farrell), who finds his life turned upside down after befriending a troubled teenager with a connection to his past; the fatherless boy begins to insinuate himself in the doctor’s seemingly idyllic life while harboring menacing motives.

The eerie thriller from the great Yorgos Lanthimos perfectly blends genres, resulting in a nightmare-worthy and chilling story that delivers countless twists that will leave audiences stunned. The Killing of a Sacred Deer competed for the Palme d’Or at the Cannes Film Festival and won the Best Screenplay Award at the esteemed ceremony; Bloody Disgusting called it “the most unsettling film you see this year” and that Farrell and Kidman “deliver their lines with a stilted coldness that sends chills up the spine.”