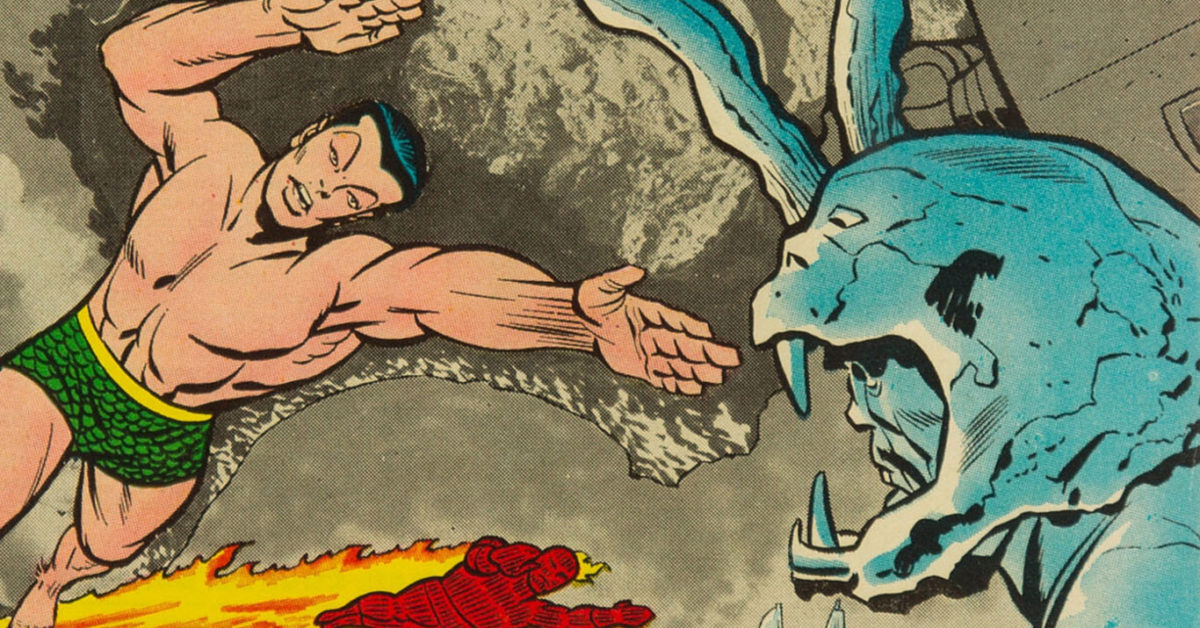 The story of the Sub-Mariner’s return to comics in the Silver Age and is one of the cornerstones of the Marvel Universe. When he was revived by the Human Torch in Fantastic Four #4, he quickly discovered that Atlantis had been destroyed by underwater atomic testing, which turned him against the human race.  The heat was turned up a notch in Fantastic Four Annual #1, as we find that Sub-Mariner has finally been reunited with the Atlanteans, and ultimately declares war on the Human Race in front of a United Nations assembly in New York City.   But in another twist of historic fate, Sub-Mariner’s rule of Atlantis is soon challenged by the Atlantean warlord Attuma. Sub-Mariner, Attuma, and the saga of Atlantis have always been important in the Marvel Universe, and that importance seems destined to increase. Namor and the Atlanteans have been rumored to join the MCU for quite some time now.  Is 2022 the year Marvel pulls the trigger for him and related characters and concepts? That just might be, so here’s an excellent opportunity to get a high-grade copy now with Fantastic Four #33 (Marvel, 1964) CGC VF+ 8.5 Off-white to white pages featuring the first appearance of important Atlantean character Attuma up for auction this today at the 2022 January 16-17 Sunday & Monday Comic Books Select Auction #122203 from Heritage Auctions.

Fantastic Four #33 provides an excellent primer for the politics and conflicts of Atlantis.  As Lady Dorma explains to the Fantastic Four, Namor returns to his people and is acclaimed by one and all.  But almost immediately, disaster struck:  the Atlantean warlord Attuma challenged Namor’s right to wear the crown of Atlantis by force — leading to an Atlantean Civil War of sorts.  Ironically, Sub-Mariner is able to defeat Attuma with the help of the Fantastic Four.  A critical character introduction and storyline which has resonated throughout Marvel history and seems destined to resonate in the Marvel Universe in the future, there’s a Fantastic Four #33 (Marvel, 1964) CGC VF+ 8.5 Off-white to white pages up for auction this weekend at the 2022 January 16-17 Sunday & Monday Comic Books Select Auction #122203 from Heritage Auctions.

View the certification for CGC Certification ID 1975500001 and purchase grader’s notes if available.