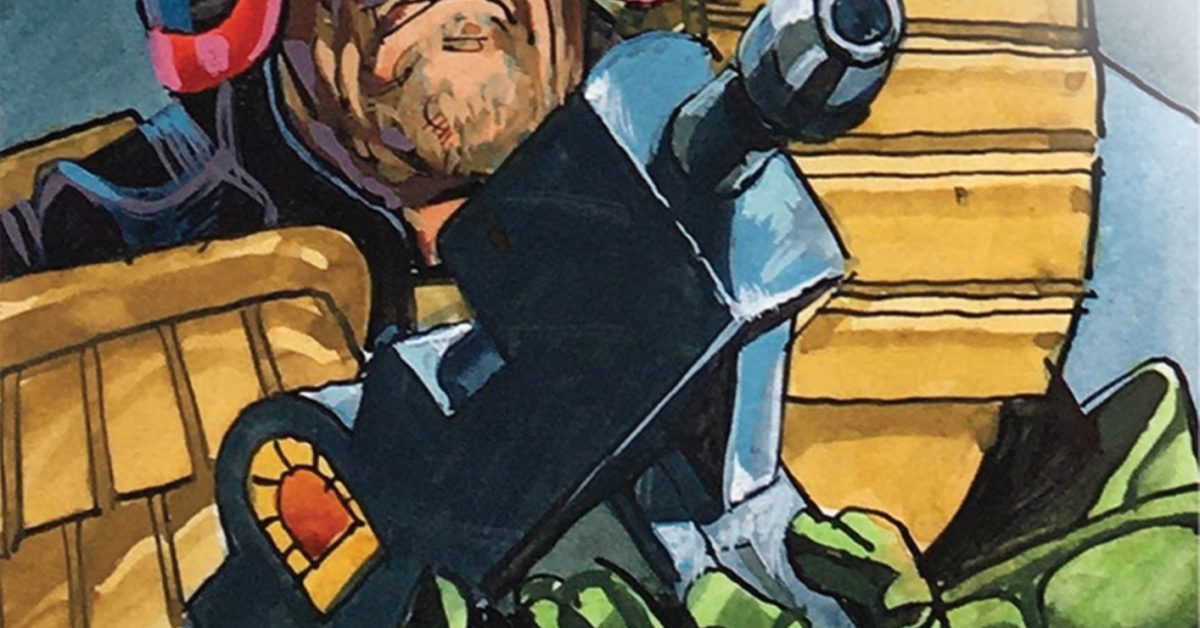 Later this month sees the Cartoon Museum of London open a Judge Dredd exhibition, for the 45th anniversary of the character and of 2000AD, running until April 2022. Bleeding Cool is always a big fan of the London Cartoon Museum as well as Judge Dredd, with Dredd@45.

Dredd @ 45 is an ‘In Focus’ exhibition that takes a look at the evolution of Judge Dredd since 1977, and how artistic techniques have changed alongside the character. Dredd has kept the same look throughout, giving an amazing insight into the contrasting styles and techniques of the different artists who have worked on the strip over the past 45 years. In 2022, many of the tools that artists use would have been considered sci-fi by the readers of Dredd in 1977!

From the physical, cut-and-stick techniques utilized in the 1970s, to the crisp lines of the 1980s and the acetate overlays and detailed inking of the 1990s, to the introduction of digital techniques in the 2000s, Judge Dredd has stood steadfast as the world of comic creation has changed around him. Dredd is always different, but always the same.

Dredd @ 45 is included in the museum ticket price, and tickets are available online from cartoonmuseum.org.

Joe Sullivan, Director of The Cartoon Museum says: “We are excited to showcase one of the most iconic British comic characters of all time, charting how the art of Judge Dredd has changed constantly since he first appeared in Prog 2, but how the Judge himself has always stayed the same as he has passed through the pencils of countless incredible artists.

“This exhibition gives a window back in time to see how comic art has changed since Dredd first appeared – undoubtedly many digital tools used regularly by artists now could have easily featured in the pages of a 1970s copy of 2000 AD as ‘sci-fi tech’!

“Working with Rebellion has been a pleasure, and we are thrilled to be part of 2000 AD’s 45th anniversary celebrations.”

Jason Kingsley OBE, CEO of Rebellion, said:  ”It’s been thrilling to see this exhibition come together for our special anniversary year. As custodians of 2000 AD for more than two decades, we’re excited to see the Cartoon Museum focus on Judge Dredd and the artists who have made him come alive for millions of readers over the past forty-five years. Such a showcase will be great opportunity for people to see how such an iconic character has been interpreted over the years but has always remained true to its core identity and look.”