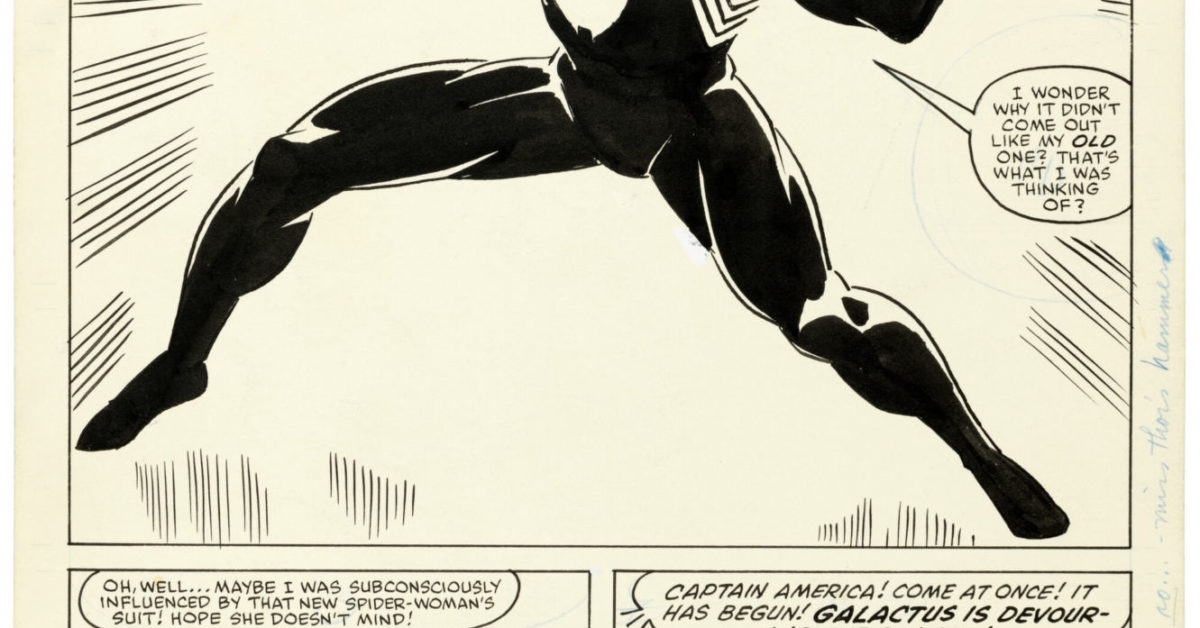 This is a famous one. You know the story, the moment that Peter Parker tries on the symbiote costume for the first time, from Secret Wars #8 from 1984. Which would one day become Venom. And the original artwork by Mike Zeck, written by Jim Shooter, is up for auction from Heritage Auctions as part of their Platinum Session. Going under the hammer on Thursday, it already has bids of $264,000.

Here’s how Heritage lists the item.

This page was the big reveal teased on the cover! This is where Peter Parker actually got his spiffy new black costume. But… it’s a costume with a secret! Because it very soon turns out to be alive and have its own agenda. This is the origin of the character Venom! The costume first appeared months earlier when characters from this series returned to the Earth. But there was no explanation for Spidey’s new duds. …Until this page seven months later! Oh yeah, Professor X, Captain America, Mr. Fantastic, the Hulk, and Thor are in the last panel also. But it’s really all about that huge splash panel costume reveal! There were three inkers on this issue, so it is unclear which one(s) worked on this page… John Beatty, Jack Abel, and Mike Esposito. Ink over graphite on Bristol board with an image area of 10″ x 15″. The lower corners are trimmed, and the paste-up “continued…” strip is missing. Very light toning and in Excellent condition.”

Of course, if that is out of your price range, they also have another page from the same issue of Secret Wars up for auction, the page before, where you see the symbiote for the first time, currently with bids for a mere $81,000.

This page is truly an iconic moment for all Spider-Man fans, as we see the evolution of what would be Spidey’s first “in continuity black costume” appearance. When Peter Parker notices that Thor’s costume has been restored, he pounces on the chance to fix his own suit, but instead, finds a machine that spits out a small black orb which quickly adheres to him.
On the next page readers would see Spidey transformed from his old tattered costume and covered in a new look. Hulk is also pictured on this page from Jim Shooter’s eighties epic, which was the bestselling series of its day. There were three inkers on this issue, so it is unclear which one(s) worked on this page… John Beatty, Jack Abel, and Mike Esposito. Ink over graphite on Bristol board with an image area of 10″ x 15″. Light toning, with the top border trimmed, and bottom right corner clipped. The art is in otherwise Excellent condition.

Late Night Hosts Struggle To Make Sense Of Texas School Shooting
Arthurian legend awaits as The Hand of Merlin is detailed and dated
Destiny 2: Where Is Xur Today? Location and Exotic Items Guide for May 20-24
From Deep In The MPA’s ‘Theme Report,’ Markers Of A Weird New Movie World
Though ‘Dr. Strange 2’ Prevails, ‘Downton Abbey: A New Era’ Pulls In Older Audiences With $18M+ Opening – Midday Box Office