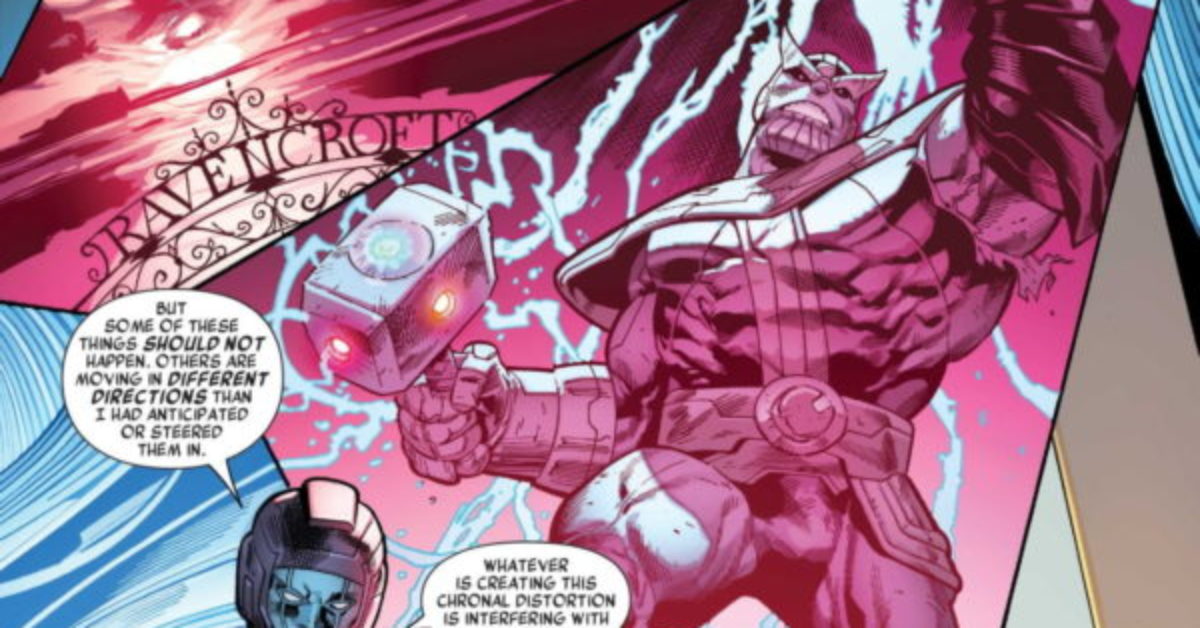 Today sees the publication of Marvel Comics Timeless #1, the big end-of-year volume that sets up much of what will be coming in upcoming Marvel Comics titles, in the manner that Marvel Now #1, Marvel Comics #100, and Incoming #1 in recent years did. And there are plenty of teases as to what is coming in Marvel Comics over the months to come. And Bleeding Cool will be breaking lots of them down with the Timeless tag today. Warning, there are spoilers. First we see a city, possibly New York skyscrapers with a web of fractures, of dimensions, across it.

We see the Ravencroft Institute, with a sailing ship in the sky, a pirate ship maybe, descending upon it through the red mists.

And we see Thanos with the Infinity Hammer and the Black Winter Gauntlet.

We have been here before, of course. In Thor #16, Thor dreamed of his future.

Thor’s eventual death in an apocalyptic future at the hands of Thanos, wielding The Infinity Hammer – Mjolnir engraved with the six Infinity Stones – and the Black Winter Gauntlet while leading an army of the dead. As previously seen in Thor #6.

And then we had the final blow.

It ends badly, and this is a future Thor is trying to avoid. But one Kang has now seen. Of course, others have also been dreaming of their futures…

TIMELESS #1
MARVEL COMICS
OCT210773
(W) Jed MacKay (A) Kev Walker, More (CA) Kael Ngu
HOW DO YOU WIN A WAR AGAINST TIME?
A special year-ending adventure that gives portents as to what is to come in the Marvel Universe over the next twelve months! Kang the Conqueror is a warrior, a destroyer, a subjugator-but even he is subject to the whims and vicissitudes of time itself. So when a parallel timeline threatens to overwrite the future that Kang has fought so long and so hard to control, the master of the ages has no choice but to go to war with time itself, battling through days of tomorrow as he struggles to prevent the end of what is to come! Featuring all the major players in the Marvel pantheon! RATED T In Shops: Dec 29, 2021 SRP: $5.99