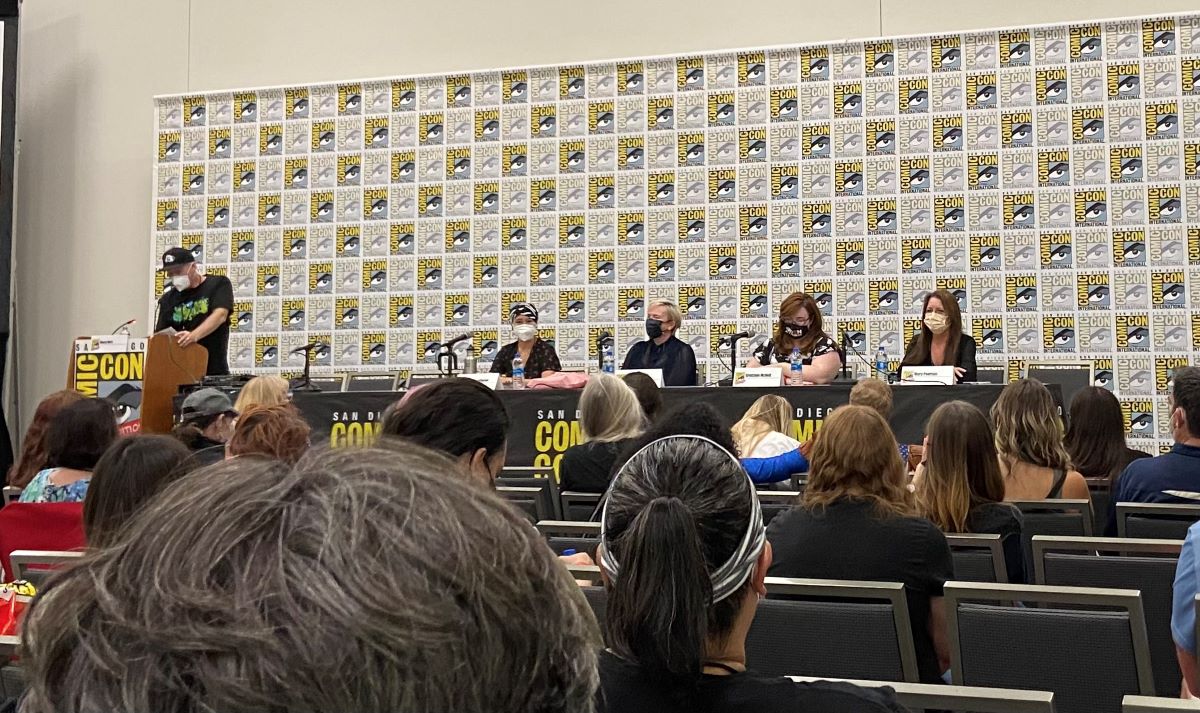 The panel of dark speculative YA fiction was intriguing to me because as a kid I devoured pretty dark young adult books. Lots of torture, murder, blood, gore…it might be said, though, that dark YA fiction may have reached its full maturation point when The Hunger Games trilogy was released from 2008-2010, with children killing children in a bloodthirsty arena, which, while not a new concept, certainly caught the eye of many a young reader and alarmed watchdog alike.

But at this panel, it became clear that dark speculative YA is still chugging along. Panelists Livia Blackburne (Feather and Flame), Kim Liggett (The Grace Year), Gretchen McNeil (#MurderTrending), and Mary Pearson (Dance of Thieves), moderated by Henry Herz (The Hithero Secret Experiments of Marie Curie) shared thoughts about their process, as well as why they write YA and speculative fiction in general.

As far as process goes, they each had their own thoughts. Pearson expressed she doesn’t always know where she’s going when she’s writing, and Liggett agreed, saying she’s not a plotter, which implies she is, to some extent, a pantser. A pantser is someone who writes without much of an outline, by the by. Liggett also said she got some advice once that didn’t work for her: “think more, write less,” which sounds like a quote from Hamilton but also advice I’ve gotten as a burgeoning writer. That’s not for everyone.

Actually, about half of the audience were writers, so a lot of the questions that both Herz and the audience asked were about how the writers of dark speculative YA fiction on the panel worked. Herz asked a question about not falling into cliches: Blackburne pointed out that there’s a certain maturity that comes with writing over the years that helps you use common tropes well, while Liggett argued to the audience that no one can write something, no matter how trope-y or cliché, the way you will write it. You have to put our own spin on it. McNeil said that there’s something to cliches and tropes, and if you have something to say about the tropes, you should do that. Pearson agreed, saying that misdirecting the audience as to how they think a trope should work can help subvert their expectations.

A question came up about teaching writing, particularly to high schoolers, and Pearson, who taught her granddaughters writing over the pandemic, said to give students plenty of room to explore and try new things. McNeil wants her fellow creative writing teachers to encourage students to finish drafts, even if they suck, and Kim responded by saying that you can write the ending first, which I actually agree with for my own process. Knowing your end point can be very helpful. Blackburne said to find people you trust to read your work at the right time, and Herz wanted to acknowledge that knowing how to revise and when to revise is key.

The darkness of the subject matter of their works was brought up, with the key question being how they deal with the grimness of it all. Liggett said she does get too into the dark, and so did Blackburne. Pearson wrapped up that segment, and really the whole panel, neatly, with the point that you have to give voice to the darkness that people in the real world actually live; you’re only dwelling with it for a short period of time.

While the panel was more about writing advice, it was interesting to see how four unique writers approach their craft, and an all-woman panel was certainly appreciated.

Miss any of The Beat’s earlier SDCC ‘21 Special Edition coverage? Find it all here!