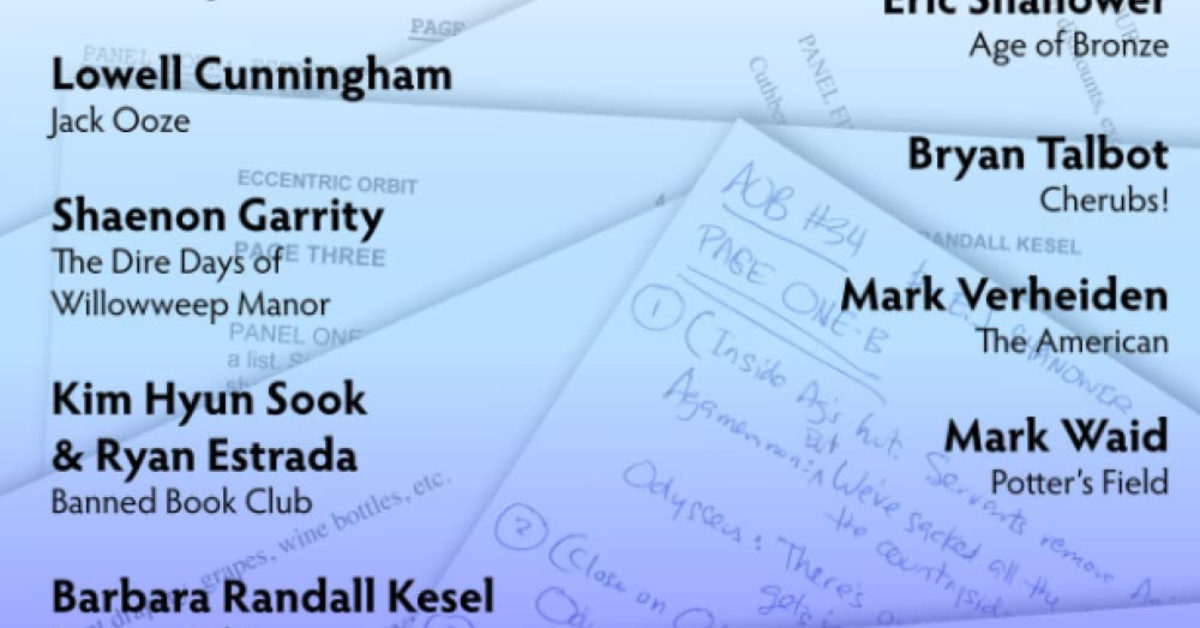 Nat Getler is a comic book-and-related hero, putting woerk back into print that had been unduly forgotten, missed out from the canon or in urgent need of archiving. From religious-themed cartoons, to The Green Book, his work as About Comics is always worthy of note. And now he has something new, Page Three, another  collection of original comic book scripts for published titles, something that fans of the work and the authors can enjoy, and budding comic book writers can learn from, And follows Panel One and Panel Two, a decade on, now with Mark Waid, Barbara Randall Kesel, Kim Hyun Sook, Ryan Estrada, Shaenon Garrity, R. Alan Brooks, Lowell Cunningham, Eric Shanower, Mark Verheiden and Bryan Talbot.

Comics scriptwriting is a largely unseen craft. By the time the reader sees the actual comic book, the panel descriptions and other instructions have all been replace by the art that makes comic books so glorious. But comics scripts have a glory unto themselves, with talented writers each using their own style and format to inform and inspire the work of the artist. In the new book Panel Three: Comic Book Scripts by Top Writers, just released in paperback and available a few days earlier as part of a Humble Bundle ebook package, some respected comic book and graphic novel creators let you in on their scripts.

Put together by Eisner Award-nominated editor Nat Gertler, this book shows you how Mark Waid writes a crime tale, Eric Shanower writes an Age of Bronze script for himself to follow, and Bryan Talbot writes one for a fellow artist. You also get Mark Verheiden showing a script for his own superpowered hero The American, The Men In Black creator Lowell Cunningham writing a new concept, Watchmen editor Barbara Randall Kesel writing an all-ages short story, and Professor R. Alan Brooks showing a brief tale from his Burning Metronome series. Most of the scripts are introduced by the writers, like Ryan Estrada telling how he and Kim Hyun Sook co-wrote the script for a chapter of their acclaimed Banned Book Club, or Shaenon Garrity explaining how she uses both script and thumbnails when writing her graphic novel The Dire Days of Willowweep Manor.

The book can serve as instruction and inspiration to aspiring writers and artists alike. “When I was putting together the first of these anthologies, Panel One, a couple decades ago,” notes Gertler, “almost every creator we contacted said that this is exactly the book they wished they had when they were breaking in. On this one, I instead heard that a writer was glad to be involved because Panel One had helped them when they were starting comics.”

The paperback is available for immediate shipping from Amazon outlets across the globe, and will very soon be available for ordering from your favorite online stores and independent bookstores in the US and the UK. But for those who like e-books, there is a particular bargain to be had – a PDF of the book is available as part of Humble Bundle’s “Creating Comics, Manga, and Animation” deal, where you can get 36 books and a set of fonts for just $25, in a deal that’s only being offered through the end of the year. (The offering of this book and Lee Nordling’s Comics Creator Prep as part of this package mark the first time that About Comics has participated in a Humble Bundle.)