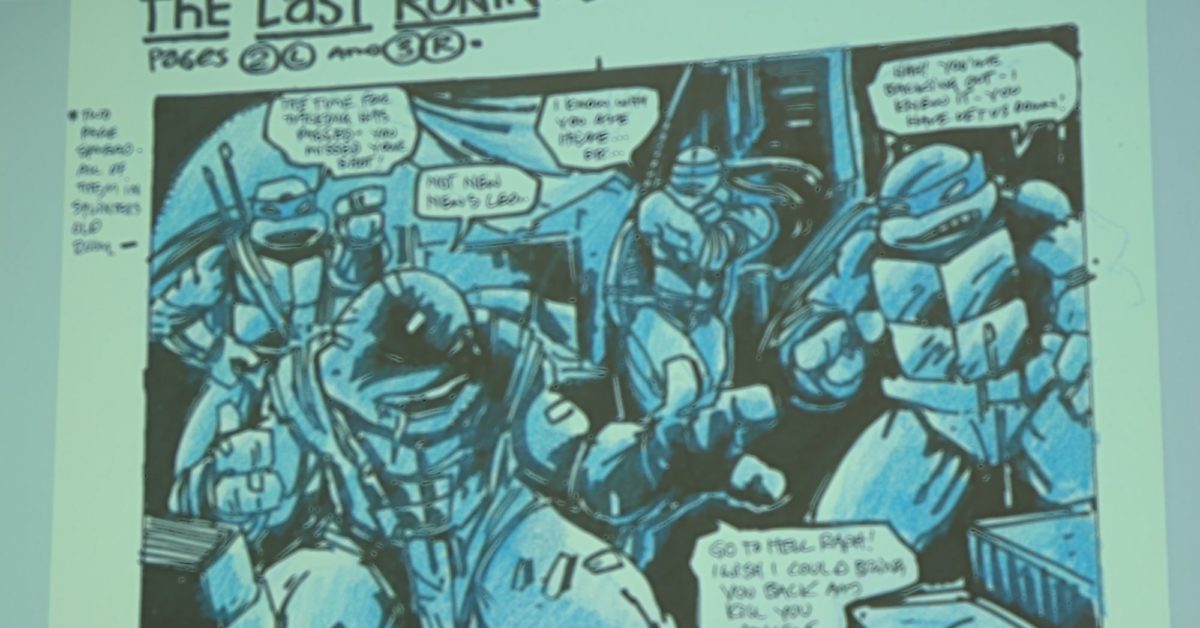 Teenage Mutant Ninja Turtles: The Last Ronin is a book that has been, let’s say, schedule-challenged. The fifth and final chapter has been long anticipated – and delayed. Something that Kevin Eastman was keen to acknowledge at his San Diego Comic-Con Special Edition spotlight panel yesterday. As way of recompense, he offered up his layouts for a double-page splash that opens the comic book in question. With an ancient Michelangelo being assaulted by vision of past Turtles.

But it wasn’t just future images that he was sharing with the assembled crowd. He also put up the original Last Ronin plan as concocted in 1987, that he only got round to doing after 2017, the year in which it was originally meant to be set, some far-flung apocalyptic future. So just three years out then…

And he also shared some of his designs for the world as it would play out now, including characters, costumes, city scapes and weapons for The Last Ronin.

Current plans for the final issue are for the 16th of February, 2022. It’s been that way for a while so maybe, just maybe?

TMNT THE LAST RONIN #5 (OF 5) CVR A EASTMAN
IDW PUBLISHING
DEC210503
(W) Kevin Eastman, Peter Laird, Tom Waltz (A) Ben Bishop (A/CA) Kevin Eastman, Esau Escorza, Issac Escorza
The jaw-dropping finale to the biggest TMNT story ever is here! One final showdown between mutant and Foot Clan will determine the fate of NYC. Will the Ronin be able to find some measure of peace or is he fated to meet the same end as his brothers? Don’t miss one of the most epic battles in TMNT history and the conclusion to the comic book event of the year!In Shops: Feb 16, 2022
SRP: $8.99