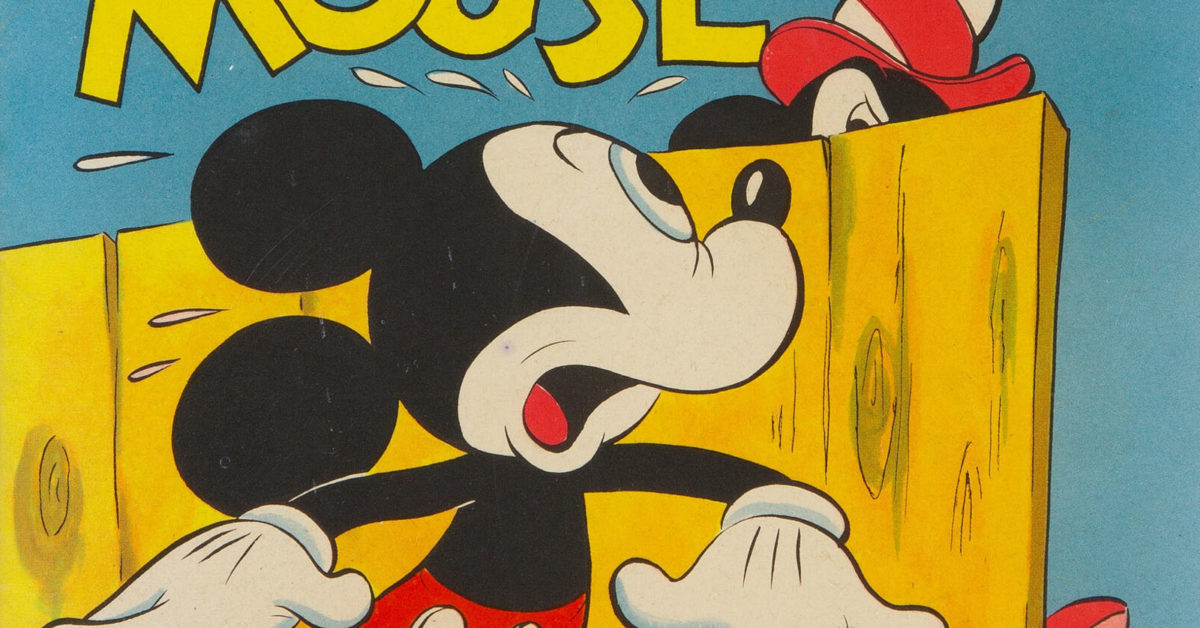 As someone who collects numerous American dime novel periodical titles which ran for over a thousand issues, I have a great appreciation for the dedication it took Denver collector Glenn Malloy to assemble the complete run of this comic book title. Dell Comics’ Four Color ran for 1354 issues from 1942-1962 and is one of the most important and successful titles in American comic book history.  Four Color comprises a number of important issues and features during this incredibly diverse run, including Flash Gordon, Donald Duck, Little Lulu, Turok, Road Runner, Barbie, Bullwinkle and Rocky, Twilight Zone, and an unimaginable range of other well-known characters and properties.  The entire series is a map of sorts to the American pop culture of the mid-20th century. Malloy notes that “collecting the Four Color series is a marathon, not a sprint. It is not for the impatient or faint of heart.”  But perhaps he’s made it a little easier for the next collectors who make the attempt.  This Four Color collection will be auctioned off by Heritage Auctions over the course of the next year, beginning with the 2021 November 28-29 Sunday & Monday Comic Books Select Auction #122148 at Heritage Auctions.

DALLAS, Texas (Nov. 24, 2021) – To our knowledge only one person has ever had the time, coffers and energy to collect the entire run of a 1,300-issue vintage comic book series – and not only that, but the very best copies available.

The series is Dell Comics’ Four Color, which ran from 1942-1962 and encompassed myriad genres: movie and TV tie-ins, beloved cartoon characters, Westerns and much, much more. And the man who collected its entire run is Denver’s Glenn Malloy, who warns that “collecting the Four Color series is a marathon, not a sprint. It is not for the impatient or faint of heart.”

Malloy did the hard part. The rest is up to collectors willing to take advantage of that patience and perseverance: Heritage Auction will spend the next year offering his staggering collection in its Sunday & Monday Comic Books Select Auctions, beginning Nov. 28. So bountiful are the books that they will be offered every week.

Four Color offered a mind-boggling tapestry of life in the mid-20th century. It started by emphasizing comic strip characters such as Dick Tracy, Flash Gordon Donald Duck and Little Lulu. But by the early 1960s, the focus was on the likes of Barbie and Ken and the all those spooky doings in The Twilight Zone.

To put the number of issues in perspective, not only has no other series had 1,300 issues, only two others have even reached 1,000: DC Comics’ Action Comics and Detective Comics. And those two series just hit that milestone a couple of years ago, whereas Four Color’s last issue, No. 1354, was published in 1962. And what Dell cranked out, Malloy collected. From Andy Griffith to Zane Grey’s Spirit of the Border.

“I’ve never heard of another complete high-grade collection of Four Color,” says Heritage Auctions Vice President Barry Sandoval. “You would need to be interested in lots of different genres – if you love Yogi Bear, you wouldn’t necessarily collect The Untouchables, too. And while lots of kids tried to keep their Marvel superhero comics in the nicest possible condition, they likely wouldn’t have done the same for something like Mister Magoo.”

Hundreds of the comics being offered by Heritage throughout the next year were originally Dell file copies, while many others hail from esteemed pedigree collections such as the Edgar Church Mile High collection, the Davis Crippen “D” copies or the Circle 8 pedigree.

The CGC Collectors Society registry, which allows collectors to track their collections, has previously given this collection both its Best Golden Age Set and Best Silver Age Set awards. The total collection is estimated to bring more than $500,000 at auction.

Of course, it won’t be easy for Malloy to part with the fruits of his labor. When he explains why he’s bringing them to auction, though, you understand why: He says it quite simply came down to shifting his focus to the other types of comics he collects that are less frustrating to pursue: “I never gave up trying to upgrade the Four Color issues I had,” he says. “But higher-grade copies than the ones I have just come up so rarely that those additions were too few and far between!”

So now collectors can begin collecting his legendary collection, starting this week with such titles as: All seven issues of Rawhide, the comic-book adaptation of the TV series that made a star of Clint Eastwood. And all three issues of Beep Beep the Road Runner, which Malloy, like Wile E. Coyote, chased to the ends of the earth (all three issues). And Walt Disney’s Gyro Gearloose, featuring a story, cover and artwork by the beloved Carl Barks.

So wild and wide-ranging is this collection that you will find all six issues of Disney’s adolescent adventure Spin & Marty, the only two issues published of the wildly obscure Crusader Rabbit, the sole issue of CBS-TV’s The Aquanauts, the lone issue of Brain Boy … and the adaptation of the 1958 film The Vikings, with Kirk Douglas on the cover and John Buscema’s art inside.

‘This Is Us’ Series Finale Grows To 6.4 Million Total Viewers, 1.3 Demo Rating – Update
The next Crusader Kings 3 patch makes the Visigoths vanish
‘Everything Everywhere All At Once’ Knocking Out ‘Uncut Gems’ To Become A24’s Highest Grossing Movie Ever At Domestic Box Office With $50M+
GRID promotes Mikael Westerling to Chief Sales Officer
No Big Deal, Just The Rock Watching The Beverly Hills Cop Movies And Shouting Out Eddie Murphy’s Work