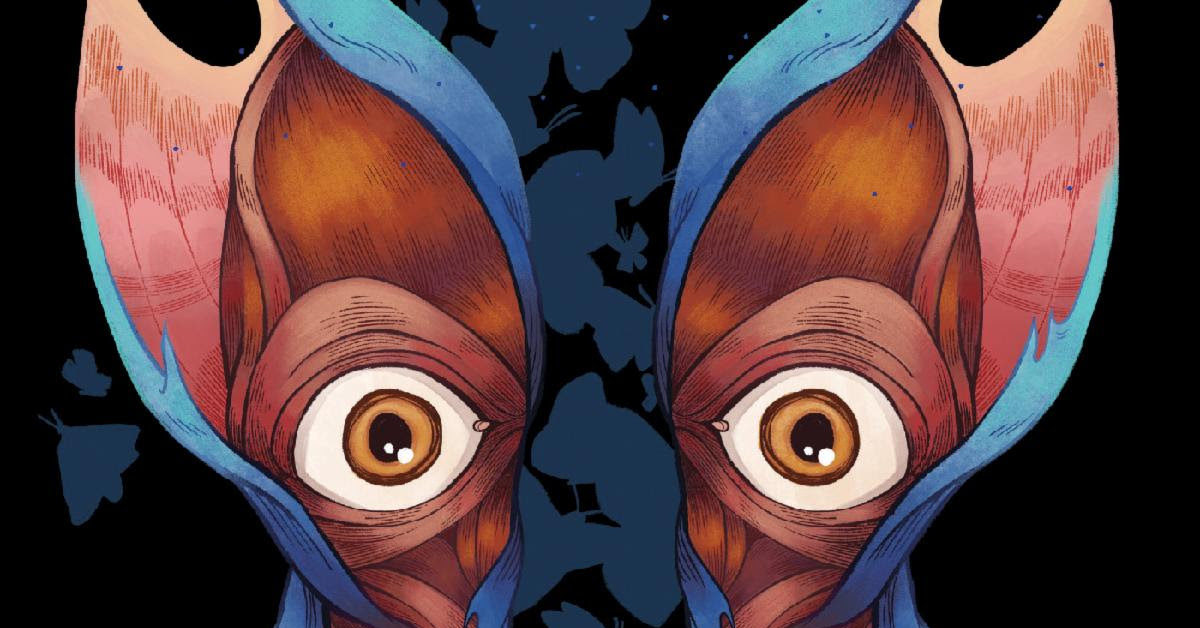 Silk Hills is a new original graphic novel written by Ryan Ferrier and Brian Leve, drawn by Kate Sherron and lettered by crank!, published by Oni Press in the summer of 2022.

When Beth Wills comes to Silk Hills, a small Appalachian town that’s seen better days since the mines were abandoned, she expected a bit of culture shock…but not like this! Beth is someone who has a talent for finding people who don’t want to be found, and when she’s called to Silk Hills by a local titan of industry, she can tell that something’s not right.

The town was once booming, but now the only reason people tend to come through anymore is to buy Mothman merchandise. Before long, Beth finds out just how wrong things can get in the woods, as her search for a missing troubled youth finds her running afoul of the local drug trade, too-friendly creepers, a very sinister deer, and psychoactive moth dust.

“Silk Hills was another chance to work with collaborators I adore and who, in turn, have faith in me when I say ‘Okay, but I wanna try something a little weird here.’ I prefer to tell dark tales in colorful ways, especially when there’s light and life to dig out from beneath burnt-black story-skin, and bless the boys for supporting such choices from the outset,” said Kate Sherron.

Ryan Ferrier says Silk Hills “was the chance to create something that genuinely scared me; to explore the unfamiliar and unsettling; to peel back the skin, so to speak, and do something finely tuned into never-quite-center. I was lucky enough to do so with the two most creative and remarkable souls I know. I’m excited for readers to fall through the rabbit hole of Silk Hills so lovingly and devastatingly crafted by Brian, Kate, and me.”

Brian Level adds “Silk Hills, for me, has been a journey from its decaying streets into a dark hidden heart. Though violent and terrible, it’s filled with love and levity. The push and pull of tradition and transformation is covered in a layer of blood and soil. One part mystery, one part fairy tale, and one part unflinching horror, Silk Hills is a story that unearths its own hidden heart and devours it.” Silk Hills will be published on the 25th of May, 2022.

Ryan Ferrier is best known for comics such as Kennel Block Blues, Death Orb, I Can Sell You A Body, the highly celebrated D4VE trilogy, and the graphic novel Criminy, as well as writing for Teenage Mutant Ninja Turtles, Deadpool, Batman, Mighty Morphin Power Rangers, G.I. Joe, and Planet of the Apes. Brian Level is a tattooist who has worked on comic books including Star Wars, Batman, Spider-Man, Avengers, and Deadpool.

Kate Sherron is an artist, designer, and comic-book writer whose comics credits include The Amazing World of Gumball, Adventure Time, Rugrats, Labyrinth: A Discovery Adventure, and, of course, Invader ZIM.

The Trials of Linda Park
Andrea Brooks Talks Romance to the Rescue, Teases When Calls the Heart Finale’s “Wonderful Payoffs”
The PSLS PS5 Restock Update for May 26, 2022
XXXTENTACION’s Mom Says ‘Look At Me’ Doc Humanizes Her Son, Rappers Cosign
RECAP: Riverdale S6E15 – Chapter 110 – Things That Go Bump In The Night