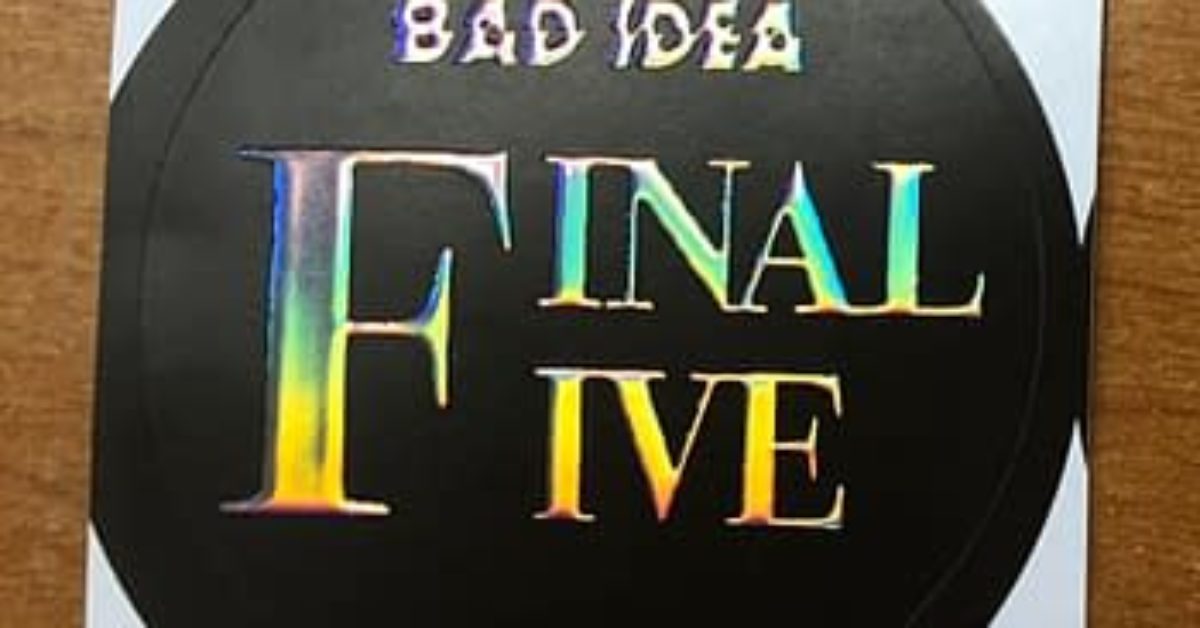 Bad Idea Comics has been running all manner of promotions to both excite and enrage comic book collectors, as long as people talk about them. Such as suggesting that for Black Friday, people might want to spend $14 to get a redeemed, unusable “Final Five” sticker from a previous promotion. And even though it can’t be used, some people are going to do it just in the off chance that Bad Idea is lying and it can be used for something. While also noting that they sent a brand new Hero Trade comic book, The Brief Case by Matt Kindt and David Lapham, the existence of which had never been mentioned until now, to people who had sent them funny e-mails.

The BAD IDEA Black Friday Re-Purchase Sales Event Is Now On — But Only For 24 Hours!

What you are about to read is a transcript of an actual conversation that took place on November 22nd at 3:45pm somewhere in Southern California.

The opinions are real though the names have been changed to protect the innocent.

Ace: Broheim! I just got my BAD IDEATM Final FiveTM sticker redemption package with Hero Trade: Passive/AggressiveTM in the mail!

Brexiton: Sweet! Did you get a copy of the super-secret extra book they only sent to a lucky 50 fans who sent in funny letters, fan art, novelty checks or *gasp* bribes?

Ace: Nah bro. I didn’t get a copy of Hero Trade: The Brief CaseTM but it’s all good because I love what I did get and supporting BAD IDEA blindly is it’s own reward. You know one should never question or stop to think about what BAD IDEA is offering for sale. Unthinking obedience is the best way to really savor the BAD IDEA flavor.

Brexiton: Totally agree. Did you get your sticker back though?

Ace: You know what Bro Derek, I did not!

Brexiton: Yeah, I heard only a few people asked for them back. I wonder what BAD IDEA is going to do with all the stickers people sent in.

Ace: They’re gonna throw them all away Bro Jay Simpson! What else would they do with them?

Brexiton: You’re right. What else could they possibly do with them?

Ace: Nothing Brobi Won Kenobi! There’s literally nothing good that anyone could think of to do with that many second hand stickers.

Did you pre-order a dozen comics and only get a tiny sticker for your trouble?

Did you then foolishly send that sticker to BAD IDEA and not ask for it back?

Do you wish you could somehow re-purchase your Final Five sticker?

Are you a fan of brazen holiday cash grabs?

Then you’re in luck!

Simply Paypal $9.99 + $4 in shipping and handling to orders@badideacorp.com and BAD IDEA will send you back an authentic, second hand, no longer valid for redemption, BAD IDEA Final Five sticker!

Don’t forget to include your full name and mailing address in the note.

Offer valid for 24 hours. All orders must be received by midnight PST November 26th.
Please allow up to 6 weeks to re-receive your sticker.

So… will you gamble $10 plus $5 shipping for something Bad Idea state will not be worth anything?as it says, the deal closes at midnight tonight…