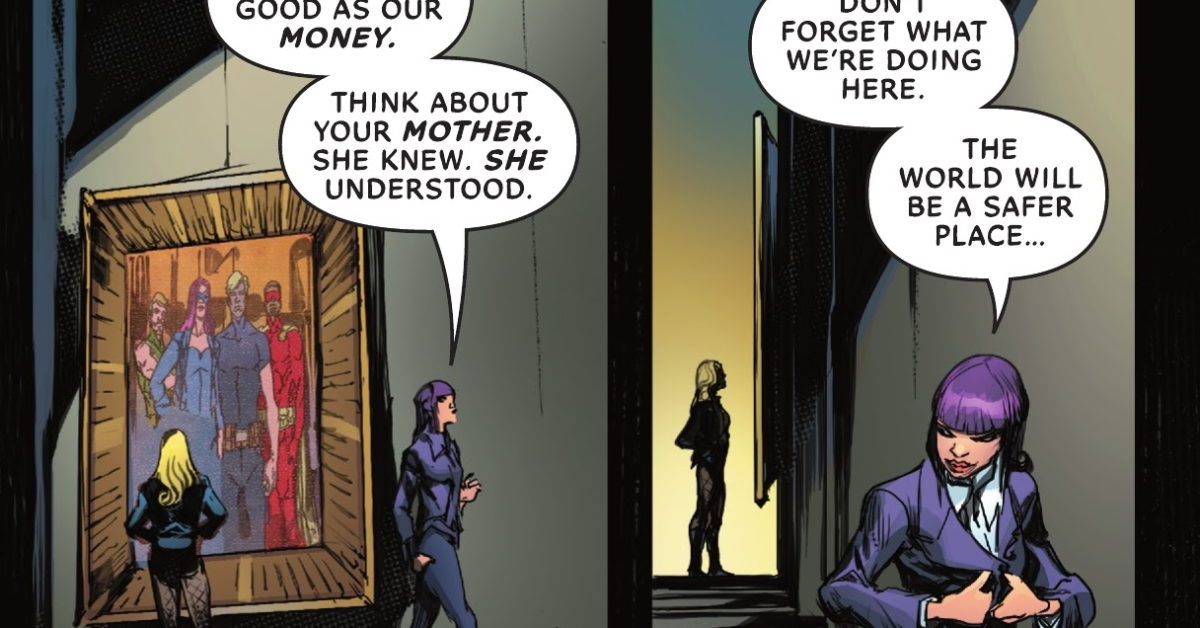 DC Comics’ Batman: Urban Legends #6 got a lot of attention a few months ago for what happened with Tim Drake and Bernard Dowd, eventually paying off next month in Batman: Urban Legends #10. But it also revealed something about Black Canary. And of course, it was written by DC Comics Continuity Czar, Joshua Williamson, and drawn by Trevor Hairsine, Rain Beredo and Steve Wands. Taking place in the T.R.U.S.T. organisation currently messing up Deathstroke, we discover that Dinah Lance, the Black Widow was not the only person who worked with them.

So did her mother, Dinah Drake, the Black Canary of the Justice Society Of America alongside detective Larry Lance.

Her mother had been wiped from continuity along with the rest of the Justice Society, and her relationship with Oliver Queen, the Green Arrow. Now, in the world of Infinite Frontier, both are back. And can be used as leverage. In today’s Deathstroke Inc #3, also written by Josh Williamson that relationship continues to play out.

Which gives Dinah a chance to reflect upon her mother and their relationship. Especially since up to this point, there hadn’t been one…

Okay, who’s up for a big time travel story? After all there’s a lot that one Dinah could learn about another…

DEATHSTROKE INC #3 CVR A HOWARD PORTER
(W) Joshua Williamson (A/CA) Howard Porter
Deathstroke hunts the deadly Cheetah to the last place you’d expect…the legendary land of Che-terra, a storybook fantasy of Cheetah’s creation! To get to Cheetah, Deathstroke must hack his way past evil witches, murderous unicorns, and an army of cat warriors! Plus: Black Canary went undercover with T.R.U.S.T. to learn who was really pulling the secret organization’s strings, but she is not prepared for what she finds! Retail: $3.99 In-Store Date: 11/23/2021