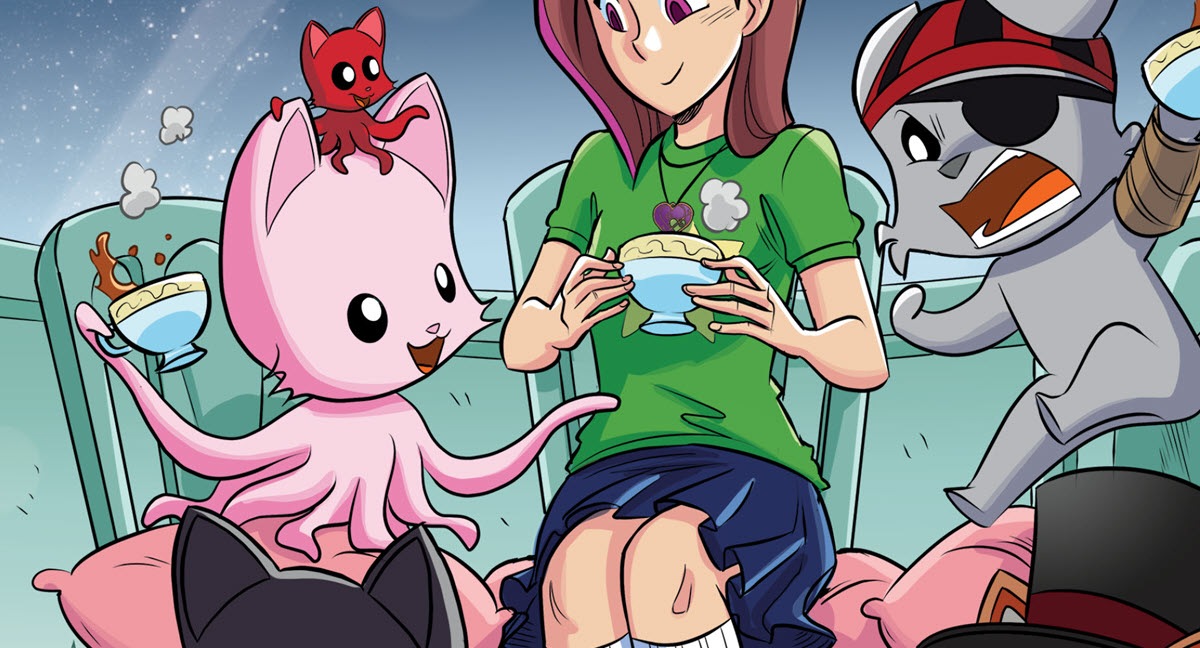 Next year Dark Horse Comics will release Tentacle Kitty: Tales Around the Teacup, a middle-grade graphic novel from writers John Merritt & Raena Merritt and artist Jean-Claudio Vinci. The book brings the Merritts’ character, a cat from another dimension who, as her name implies, happens to have tentacles in place of legs, to her own anthology graphic novel for the first time, and today The Beat has an exclusive look at all the adorable tea-drinking action.

The world according to Tentacle Kitty!

Join “the Pink One” and friends as the whole tentacle kitty gang regales us with tales of action and adventure over tea! From hunting down cotton candy mice, to pirate hijinks, and mega convention run ins, this tome features stories for all readers, told only as a Tentacle Kitty can!

Tentacle Kitty was created by the Merritts in 2009, and has been a mainstay on the comic convention circuit ever since. The character and her supporting cast have been the subject of multiple successful Kickstarter campaigns for plushies. While Tales Around the Teacup is Tentacle Kitty’s first graphic novel, it’s not the first time the character has been brought to comics. The Merritts also produced a webcomic series for the character, which debuted back in 2014 on Tapas. The twenty-four episodes of that series are still available to read. It’s also not the first book featuring the character that Dark Horse will have released, as the publisher put out a coloring book featuring art by John Merritt, Brittney Williams, Yishan Li, and more back in 2018.

Check out the exclusive ten-page preview of Tentacle Kitty: Tales Around the Teacup below. The 104-page graphic novel is due out in bookstores on Tuesday, April 26th, 2022, and in comic shops the following Wednesday, April 27th.