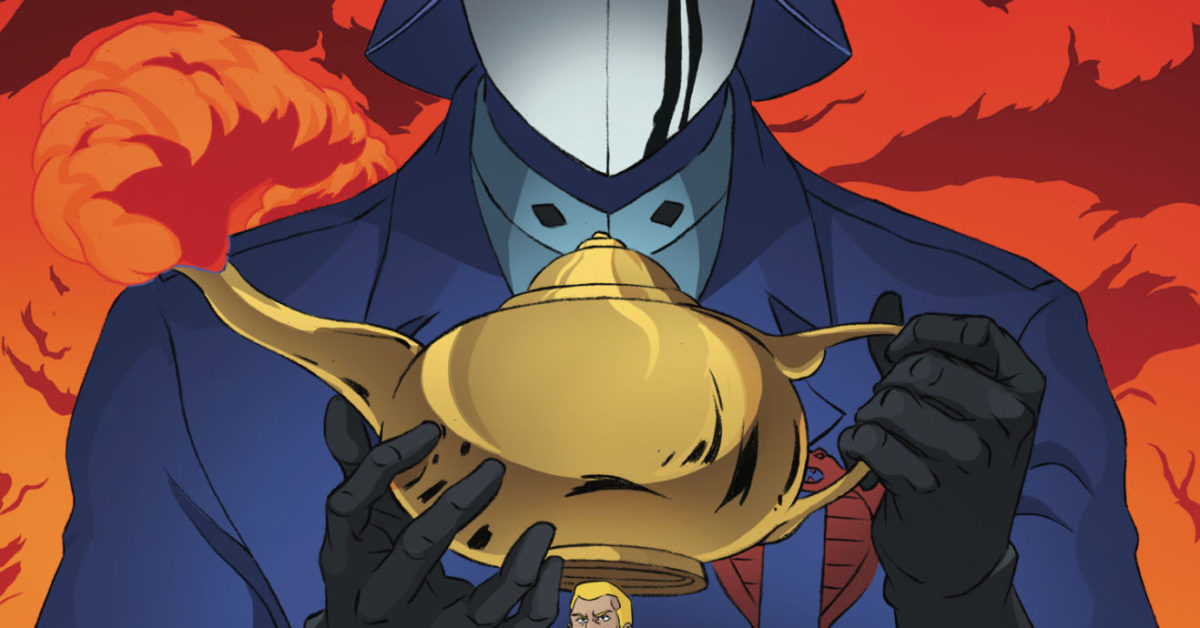 GI Joe: A Real American Hero was perhaps the finest television show of all time. At least, that was our opinion forty years ago, and we haven’t found any reason to change our minds since. It’s no surprise considering some of the talent that ran show, including comic book legend Steve Gerber, but nonetheless the cartoon left a lasting impression on many fans from the era. Unfortunately, greed caused the death of the classic Marvel/Sunbow series after two seasons and a movie, and the show was taken over by DIC, who produced a far inferior version, robbing fans of the chance to see the third season planned by the Marvel/Sunbow creative team. And the world was a less magical place.

The 1980s Real American Hero comic (which is a completely different continuity from the cartoon) made its return in 2010 at IDW, where it is still published today, surviving multiple attempts to reboot the title at the publisher. And now, 34 years after the cancellation of the Marvel/Sunbow GI Joe: A Real American Hero, the cartoon universe will return in comic book form this February with GI Joe: A Real American Hero – Saturday Morning Adventures. And nevermind that everyone knows true fans watched GI Joe at 3PM every weekday on WPIX, not on Saturday mornings. The cartoon is coming back, and all may be right in the world again. And the creative team behind it is writer Erik Burnham, artist Dan Schoening, and colorist Luis Antonio Delgado, who have done a wonderful and loving job with the Ghostbusters franchise at IDW for many years. We literally have nothing bad to say about this.

From the press release:

With the nostalgic appetite for ’80s pop culture as powerful as ever, IDW is giving fans what they want with the February debut of G.I. JOE: A Real American Hero—Saturday Morning Adventures, a special send-up of the classic cartoon, shipping monthly and featuring the fan-favorite creative team of writer Erik Burnham, artist Dan Schoening, and colorist Luis Antonio Delgado.

Everyone knows that G.I. JOE is the code name for America’s daring, highly trained special mission force, and that their purpose is to defend human freedom against Cobra, a ruthless criminal organization determined to rule the world. But now, Cobra has launched the Aladdin Initiative, their most versatile weapon yet… challenging Duke, Scarlett, Snake Eyes, and the G.I. JOE team like never before!

Okay, actually, we take it back. We do have one complaint: that this is only four issues and not an ongoing. But maybe we can change that if we all buy 100 copies. Come on, people. We’ve  never asked you for anything. Give us this one.

Here’s what Erik Burnham had to say about it:

I loved how straight-up weird cartoons can be. The G.I. JOE: A Real American Hero cartoon allowed for gremlins, Egyptian gods, and of course, a ninja dressed in an 80’s New Wave outfit, wig and all. You never knew where the show might take you. Writing a story set in that universe, you can do anything… and I’m partnered with artists like Dan Schoening and Luis Antonio Delgado, who can draw anything. The idea we came to felt right at home within the world of the cartoon, and I can’t wait to share it with everyone.

As a child of the ’80s, I always had a healthy dose of the G.I. JOE: A Real American Hero animated show, not to mention the vast line-up of action figures. It’s an honor to take the cartoon that I enjoyed (and still do) so much and visually translate it into the comic book medium.

Look for GI Joe: A Real American Hero – Saturday Morning Adventures #1 in stores in February with a main cover by Schoening, a variant by Megan Huang, and a retailer incentive variant by Billy Penn.

Capcom will have “many different ways” to celebrate the 35th anniversary of Street Fighter in 2022
Pantha #1 Sells Out, But #2 Orders Are Too Low – Goes Back To FOC
Check Out Upcoming MMORPG Lost Ark In A New Introduction Trailer
HBO Max, Rooster Teeth & DC Announce ‘Podly’ the ‘Peacemaker’ Podcast
Escape the Mind of a Dictator in Far Cry 6’s Pagan: Control DLC Episode