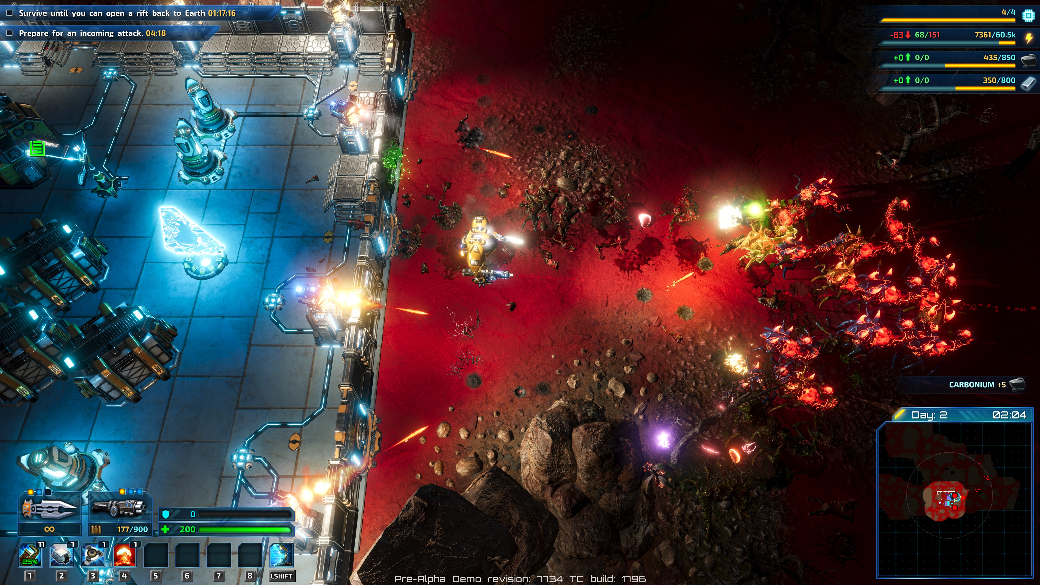 EXOR Studios have created something which is a fairly new concept in gaming. Well, I say fairly new, as it’s more of a mashup of existing game styles, but one that has been executed very well. The Riftbreaker is a base building, survival game with action RPG elements. Now, if this sounds like They Are Billions, as an example, there’s a good reason for that: there are a lot of elements in common. In fact this borrows from a lot of games: a dash of Diablo, a splash of Command and Conquer and just a hint of They Are Billions, all blended together. But is this a case of a blend too far? It’s time to travel the galaxy to find out.

The story of the game is passable, to be kind. We are Captain Ashley S. Nowak and we are a Riftbreaker. Riftbreakers are an elite scientist/commando (an odd combination as you’d think the white coat would get ruined when it’s covered in alien guts), who roam about in large Mecha Suits. These Riftbreakers are sent off to explore strange new worlds, all in order to build up bases that will allow humanity to expand, and probably ruin a whole new world too. Ashley’s Mecha Suit, which she calls Mr Riggs, is capable of not only building outposts and surviving in the harshest places, but it also comes fully tooled up with the very latest in alien-mincing equipment. Which, as it turns out, is pretty handy!

So, Ashley and Mr Riggs are sent to a planet called Galatea 37, via a one way portal. Once we arrive on the surface of the world, we are on our own, relying on Ashley’s wits and Mr Riggs’s brawn to survive. The first order of business is to build a headquarters, which will allow Mr Riggs to respawn if he is murdered by the nasty locals. Here though I would like to offer a top tip for survival: Don’t build the base just where you spawn. The reason for this is that the base building requires certain elements, namely Carbonium and Ironium. It is worth exploring a bit in an attempt to find some deposits of both, and if you can find both relatively close together then you are luckier than me. Now, once the deposits are found, Mr Riggs can mine the ore and store it in his pockets; doing this will allow you to finally build a headquarters. From there, the world is the mollusc of your choice, as you build not only walls to deter the besties, but towers to shoot them in the face, and also power plants and ore extraction facilities. It’s about then when the fun can begin.

The base building phase is pretty engrossing, with a real depth to it. Take the subject of power, for instance. You can go all Greta Thunberg and build only wind and solar power, or you can run the full-on eco-terrorist route, creating power plants that run off the flesh of your defeated enemies and trees that Mr Riggs can chop down. You can even make a power plant that runs on Carbonium, but this has the side effect that ore that is used for power isn’t available to build stuff with.

And that’s just the power section of the build menu, without touching on the planning of power distribution, or the different sorts of power plants that can be researched as you go on through the game. Making walls, creating defences, and adding in some depth (I favour a wall, then a row of towers, then another wall for ultimate security) is vital, as when the base is built up, it starts to annoy the neighbours, and they will send swarms of creatures to you in order to remove the annoyance.

This leads us neatly onto the other half of The Riftbreaker – that of exploring and/or combat. Mr Riggs controls in a twin stick stylee, with the left stick running him about, the right stick aiming. From there RT and LT buttons fire the weapons attached to his right and left arms respectively. As the game goes on, you can research and craft new weapons, ranging from a little weedy machine gun up to massive rocket launchers, and as the creatures do in a variety of sizes and ferocities, choosing the right weapon can make a difference. Although, if you’re like me, you’ll waste all the ammo firing wildly and end up taking on the hordes with a sword and some bad language.

Mr Riggs can also research new abilities, such as dodge dashes, and even find new technology tucked away in pods on the surface. A warning though: attempting to open these pods summons every critter within seemingly 300 miles, so be prepared to fight if you find one.

Graphically the game looks very good indeed, especially at night, when a lot of the plants and animals seem to have bioluminescence, glowing softly as the rest of the night is dark. Viewed from a top down perspective, the graphics work well, and add to the Diablo-lite kind of feel. Seeing your base take shape out of the wilderness is pretty rewarding, and there’s an almost zen like calm that comes over you as you work out where best to put the power plants or storage silos for the ore, before a swarm of creatures arrives and rampages through. Sound wise everything is pretty cool as well, with good voice work both for Ashley and Mr Riggs, and the sounds of squishing wildlife are all faithfully recreated as well.

In all, The Riftbreaker does enough in a new and interesting way to be worth your time. With four biomes to go at, and a survival mode to try out (although you’ll probably want to stay away from the ultra hard difficulty!), there’s a lot of content to go at. The campaign is a decent length too. All in all, if you want something a bit different to the norm, The Riftbreaker might just be it.

Visit the Xbox Store to download The Riftbreaker on Xbox