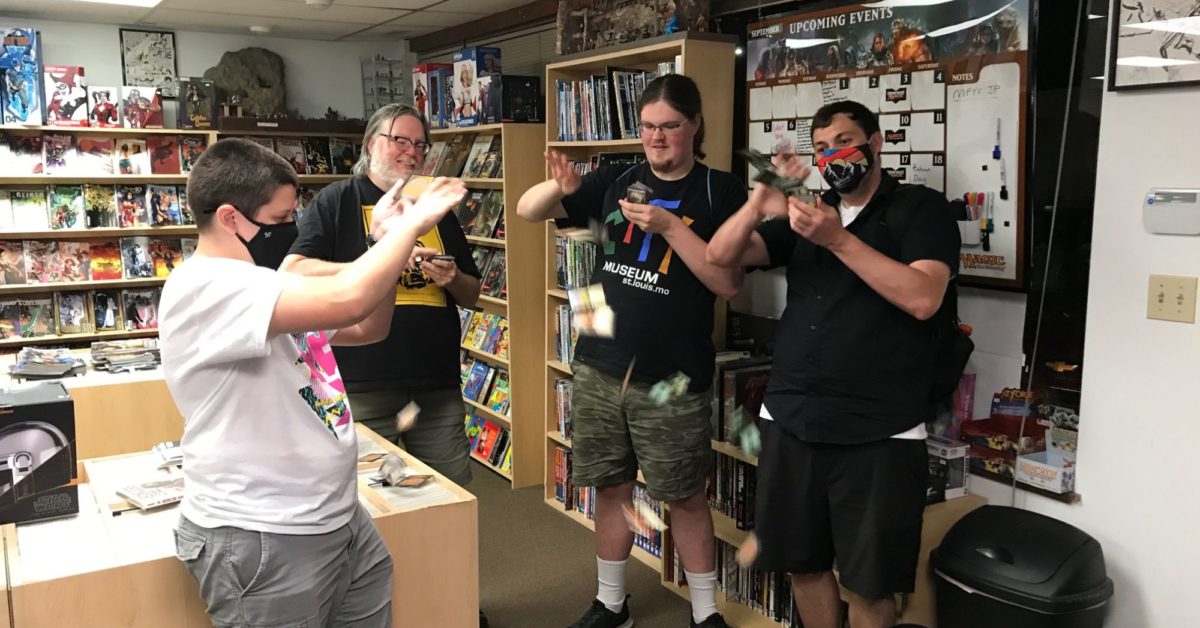 Target is still carrying Magic the Gathering and Pokemon unless central Iowa is different from the rest of the country. Unless the Wal Marts in central Iowa are operating differently from the rest of the country, Wal Mart is still carrying all the cards they did months ago. Sports, Pokémon, Magic, and so on. I stopped by the Wal-Mart here in Ankeny. One of the employees came up, talked with me, and offered me sports cards. There were some on the shelf, and she said someone returned some. I told her I did not know anything about sports cards, though I hear people can get very excited over them. She laughed and said yes. Then she was polite enough to ask me if I was interested in Pokémon cards and told me she could get me some if I wanted. I said no thanks. I was just checking out the Magic cards. I was hoping to get a collector’s pack. I saw everything else product-wise for the previous set except collector’s packs. In all my years of going to Wal Mart, it was the first time an employee came up to me and talked to me that I did not already know, such as a person who shops at my store and works for Wal Mart. In Target, I have never had an employee say a word to me at all other than at check out. It is one of the reasons when Wal Mart announced they would be carrying exclusive comics; I was not concerned. It isn’t like big chain stores are known for being heavily customer-friendly or knowledgeable about collectible products.

People wondered if local gaming stores would raise prices because they were under the wrong assumption that Wal-Mart and Target would not be carrying trading cards. They were panicking over nothing. Prices were raised over other reasons, such as Wizard of the Coast, the makers of Magic the Gathering raising prices.

Being in the game trade can be a thankless job. Provide a place for Magic players to play and get things like players saying I wish the MSRP were back.

Oh yes, the old player bringing up sticking with MSRP. No player actually cared about paying MSRP, just paying below MSRP. MSRP stands for the Manufacturer Suggested Retail Price known as the “sticker” price. All those boxes of Magic the Gathering players get online and buy from gaming stores? Way below MSRP for years. I usually could care less about selling boxes of Magic; the markup is so low. Selling all the packs in a draft box for four dollars is much better.  Currently, Magic the Gathering does not have a suggested MSRP.

When it was first announced, the first Magic the Gathering set of Modern Masters back in 2013 was sold below MSRP; then, closer and after the release date, it was sold above MSRP. Wizards of the Coast did not know how hot of a product they had at the time. People were happy to pay more to get the product. The cards in the packs often were worth much more than what people were paying. It is the Magic set my store made the most money from.

The old thought that the store is being greedy for selling above MSRP was a cheap magic player’s argument. The same person would have no problem playing at a store for free forever and not dropping a dime. They would still whine when the same store makes money. The whole joke was when players complained about stores charging above MSRP; they were being greedy. The same thing they were accusing stores of being. They don’t care if the store makes money. They do not care the store owner works for the same reason they do, to make money. If they can convince the store owner to sell for less or to give away more in prizes for gaming, even to the point of the store owner losing money, they are perfectly fine with it. It is not their money.

A store owner in another state where I stopped in once told me a story about how a group of magic players would come into his store and talk about how much fun they had at their old store and how much they missed their old store. These same players had bought their magic through the old store they played at. Then without telling the store owner, they all switched to purchasing magic online. The store owner who assumed they would be getting the new Magic product through them found out the hard way after receiving the product that they were not going to be buying from the store they played at. That store went out of business. How did the new store owner know all this? He bought all the stock the old store still had for cheap when they went out of business, and this story is part of the reason he doesn’t host gaming.

There are gamers out there that do care about the store they play at. God bless them; those are the gamers we want. By getting rid of free gaming, we started making a lot more money. We started focusing on people that were not out to take the store for everything they could.

Years ago, I had a Magic player who at the time played here regularly come in after doing online research. He studied up on how much a box of Magic costs a store. He thought I should just charge him ten dollars above store cost. He acted like the ten dollars would go directly into my back pocket. That is not at all the case. I flat out said no, it would be a waste of my time; he argued and was not happy I would not go along with it. It did not factor into his thinking of all the time he spent playing Magic here. It was like he thought he was doing me a favor playing at my store. No. I tried to explain the ten dollars didn’t go directly to me.

Once he swipes his card to pay for a box, a percent goes to the credit card company. Shipping and handling fees be involved. Whatever is left goes to expenses. Not every Magic product is a hit (such as Magic Theme decks which we do not even order anymore). Unsold product may get sold at a big discount to get it out of the store, though the product still costs money. Magic the Gathering, much like comics, is not returnable. Part of the money made on products goes to cover money not made on other products. Employees like to get paid for their work. Money made covers employee expenses. Again money.

Expenses such as rent and utilities must be paid with money. No money means no payments, which leads to a store going out of business.

Never mind, the players who try to get stores to charge less and/or give away more for prizes have expenses also. None of them would be willing to take a pay cut. They all want money to pay their expenses.

I harp on Magic because before covid, Wizards of the Coast really had not done much to encourage people to spend money in stores that host Magic events. Wizards were perfectly happy to have their product bought online or in-store.

I once had a Heroclix gaming event at the same time as a magic event. When they were done, the Heroclix players thanked me for having them. The Magic players looked at them like they were crazy for thanking me. The Magic players got done with their game and proceeded to start up new games. They were perfectly fine with keeping me past closing as long as they could keep playing, even without spending anything more. I finally had to kick them out, and of course, not a single thank you, even though they took far more of my time.

Casual magic players have always spent far more with us than die-hard magic gamers. So, of course, we cater to the casual player more. Earlier this year, we made a ton of money off Magic and had no Magic events.
I do not miss prize sharks, players who are just playing for prizes and not for fun. They also often try to up the prize pool though not willing to spend a dime more.

Again, when Magic players complained about physical stores charging above MSRP, they were being greedy. Flip things on them, and they would do the same thing. They would not put up with people that cost them money. They would want me gone if I came to where they work, freeloaded, and cost them money. Though it is perfectly fine when they do it to others?

Ultimate Masters, Double Masters, Times Spiral, and other sets were Magic sets; many players complained that they were too high priced and claimed they would not touch the sets. Then, after the set cards were revealed and came out, the sets blew out the doors.

Getting rid of free gaming for Magic, Star Wars X Wing, Heroclixs, and D&D did not hurt sales at all; it increased sales. We had people coming in here treating us like a business and not just a place to hang out.

A store owner very well could have a lot in common with a player. A spouse, kids, rent, mortgage, health problems, debt issues, just trying to make a living, or any number of things people deal with.

Five delightful things to do in Solar Ash, out tomorrow
Get 56 games by donating to this year’s Jingle Jam
Gallery: Here’s What Zelda: Breath Of The Wild Looks Like With Raytracing
REVIEW: Burst at the seams with CAT KID COMIC CLUB: PERSPECTIVES
S.W.O.R.D. #10 Review: A Big Swing