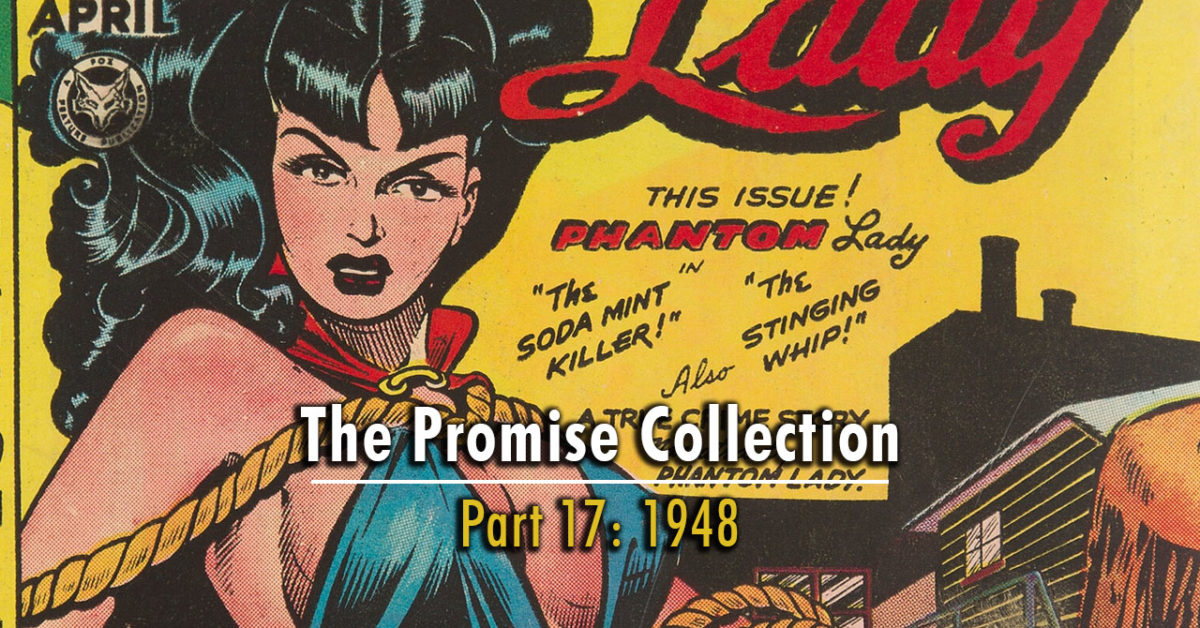 It is perhaps no coincidence that perhaps one of the most infamous comic books in vintage comics history was published at a moment of one of the industry’s greatest peril.  The Promise Collection’s copy Fox Features Syndicate’s Phantom Lady #17 with its notorious Matt Baker cover recently sold for a record $456,000 — a result that puts it on par with many of the most important comic books of the Golden Age, and certainly one of the best covers of the era.  Called “a sadist’s dream” (among other things) by Fredric Wertham in Seduction of the Innocent, this comic book is usually associated with the Pre-Code era that ended with infamous Senate hearings, the formation of the Comics Magazine Association of America, and the institution of the Comics Code.  And while the Phantom Lady title did help trigger that sequence of events, in reality, it was also a part of more obscure 1948 dramas that nearly proved just as dangerous for the comic book industry.

Welcome to Part 17 of the Promise Collection series, which is meant to serve as liner notes of sorts for the comic books in the collection. The Promise Collection is a set of nearly 5,000 comic books, 95% of which are blisteringly high grade, that were published from 1939 to 1952 and purchased by one young comic book fan.  The name of the Promise Collection was inspired by the reason that it was saved and kept in such amazing condition since that time. An avid comic book fan named Junie and his older brother Robert went to war in Korea.  Robert Promised Junie that he would take care of his brother’s beloved comic book collection should anything happen to him. Junie was killed during the Korean War, and Robert kept his promise.  There are more details about that background in a previous post regarding this incredible collection of comic books.  And over the course of a few dozen articles in this new series of posts, we will also be revealing the complete listing of the collection.  You can always catch up with posts about this collection at this link, which will become a hub of sorts regarding these comic books over time.

April Through June 1948 in the Promise Collection

1948 is the peak year of the Promise Collection in terms of number of issues in the collection. From the nearly 5,000 issues in the collection overall, nearly 1,000 issues are from this year.  This is unsurprising, as the number of comics published by the American comic book industry was increasing rapidly in the post-war era, and had already nearly doubled by 1948 since the end of the war — and would continue to rocket upward through 1952.  As we saw in Q1 1948, Junie would continue to add many of the huge number of new series that were appearing in April through June.  Many of these were once again crime comics, but Westerns were also making inroads:

Besides Phantom Lady #17, the biggest key in the Promise Collection from Q2 1948 is Batman #47, which contains a storyline that retells and expands Batman’s origin, naming Joe Chill is the street thug who killed Bruce Wayne’s parents — ultimately inspiring the creation of Batman.  Elements from this version of Batman’s origin have influenced countless retellings of that now-familiar tale across all media in the decades since.

But Crime and Good Girl comic books would continue to dominate the industry of mid-1948, at least in the public eye.  Despite a New York State statute prohibiting the sale of publications with “pictures and stories of deeds of bloodshed, lust or crime” being declared unconstitutional by the U.S. Supreme Court in WINTERS v. PEOPLE OF STATE OF NEW YORK (decided March 29, 1948), a number of other states were ramping up their attempts to enforce similar statutes which targeted comic books.  And just as importantly, pressure was also being brought to bear on comic book distributors. In response, several industry publishers formed the Association of Comics Magazine Publishers and announced their code guidelines in June:

The Association of Comics Magazine Publishers, realizing its responsibility to the millions of readers of comics magazines and to the public generally, urges its members and others to publish comics magazines containing only good, wholesome entertainment or education, and in no event include in any magazine comics that may in any way lower the moral standards of those who read them. IN PARTICULAR:

Putting the Truth in True Crime

The true-crime comic books of the Golden Age were generally true to their genre — they were at least loosely based on the real exploits of notorious criminals more often than you’d think. They largely seem unfamiliar today because the subjects of their stories have largely fallen into obscurity.  Even the notorious Phantom Lady #17 has a true-crime back-up tale featuring Evelyn Ellis, “Queen of the Gangsters” which has some basis in reality.  Ellis was part of a gang that perpetrated a string of heists on the West Coast in the late 1920s, including a train robbery.  Her role in the gang seems to have been exaggerated due to the fact that she was invariably described as an attractive blonde in news reports — which of course made her exploits perfect true-crime fodder nonetheless.  The West Coast gangster queen would also help launch Avon’s Gangsters and Gun Molls comic book title.

While Evelyn Ellis’s criminal career may have been exaggerated in comic books, the exploits of Eddie Bentz were actually underplayed. Although Bentz, the subject of Gangsters Can’t Win #2‘s cover feature, is not a household name today, he was one of the most notorious bank robbers of his era. Teaming up with the likes of Machine Gun Kelly and Baby Face Nelson, Bentz was also the likely mastermind of one of the most infamous bank robberies in history: the theft of $2.8M from the Lincoln National Bank of Lincoln, Nebraska in 1930.  Gangsters Can’t Win #2 has an overview of Eddie Bentz’s long and outrageous career.

As outlined in Gangsters Can’t Win #2 and implied by its symbolic cover, Eddie Bentz became known for his meticulous planning of his heists and their exit strategies.  The Lincoln National robbery stood as the largest cash bank robbery in the country for decades. Bentz used the proceeds from his exploits to fund an extravagant lifestyle which included collecting rare books and coins. He was ultimately apprehended by the FBI in 1936, asked to be sent to Alcatraz, reportedly telling the judge that all of his friends were already there.

And that’s where the Eddie Bentz story in Gangsters Can’t Win #2 ends.  Ironically, Bentz was paroled from Alcatraz a few months later. One can’t help but wonder what a man who pulled off some of the greatest robberies in history and used some of the proceeds to fund his collecting habit would think of the notion that a comic book featuring him was now sought after by collectors today.

Somewhat incredibly, the U.S. Supreme Court decision which addressed broad statutes restricting comic book sales may not have been the most important legal development for the industry in 1948.  Jerry Siegel and Joe Shuster‘s conflict with DC Comics over Superman and related matters spilled into public view, just as they debuted their creator-owned follow-up Funnyman:

THE CLEVELAND kids whose Superman shook the funnies business like an earthquake got a showcase this week for their new comic page superguy, a brainy buffoon they call Funnyman. Bel Syndicate will sell it. Ever since writer Jerry Siegel and artist Joe Shuster split last year with the comic-book-maker to whom they’d signed away all rights to Superman, syndicate circles had been abuzz over their new stripchild. Magazine Enterprises began putting it into monthly books in January and Bell disclosed that, starting Oct. 11, it will offer the daily strip and Sunday page.

Whether Funnyman reaches anywhere near the phenomenal pinnacle that Superman hit simply remains to be seen. In Siegel and Shuster’s story. Funnyman is a red-haired gadget-goofy comedian named Larry Davis. Clad in clown clothes, outsized shoes and a putty nose, he scoots around atop his trix-cycle or magic carpet-like Jet-jalopy and lives in Funny Manor. He, unlike Samson-strong Superman, is wiry and compact. He relies on acrobatics and a fantastic array of gimmicks, rather than on superpower, to catch crooks and un-jam himself. Hidden springs in his shoes catapault him into mid-air. His funnygun spews out water and pepper, and he parachutes down from skyscrapers.

Jerry Siegel, 33, and Joe Shuster, 34, both short and be-spectacled, learned a super-lesson from Superman. They cannily have kept ownership of their latest product. Funnyman is all theirs. Superman, they dreamed up while they still were high school classmates. Syndicate after syndicate snubbed it. Then a wily comic books publisher agreed in 1938 to take it on one condition: Jerry and Joe would give him the idea, he would give them a salary.

Comic-strippers never will forget what happened then. Superman books sold by the million. There were Superman toys. Superman food, Superman endorsements in ads. But last year Siegel and Shuster, claiming they coined only $400,000 from their idea, decided they wanted a juicier slice. They sued National Comics Publications Inc. for an accounting and $5,000,000. A judge ruled that Superman legally was National’s. Then last May agents for Smith Davis, the newspaper broker, stepped in as Jerry’s and Joe’s mouthpiece. The artist and writer settled for $100,000 more.

The trends that both Phantom Lady #17 and the Funnyman series represented would help shape the comic book industry for decades to come.