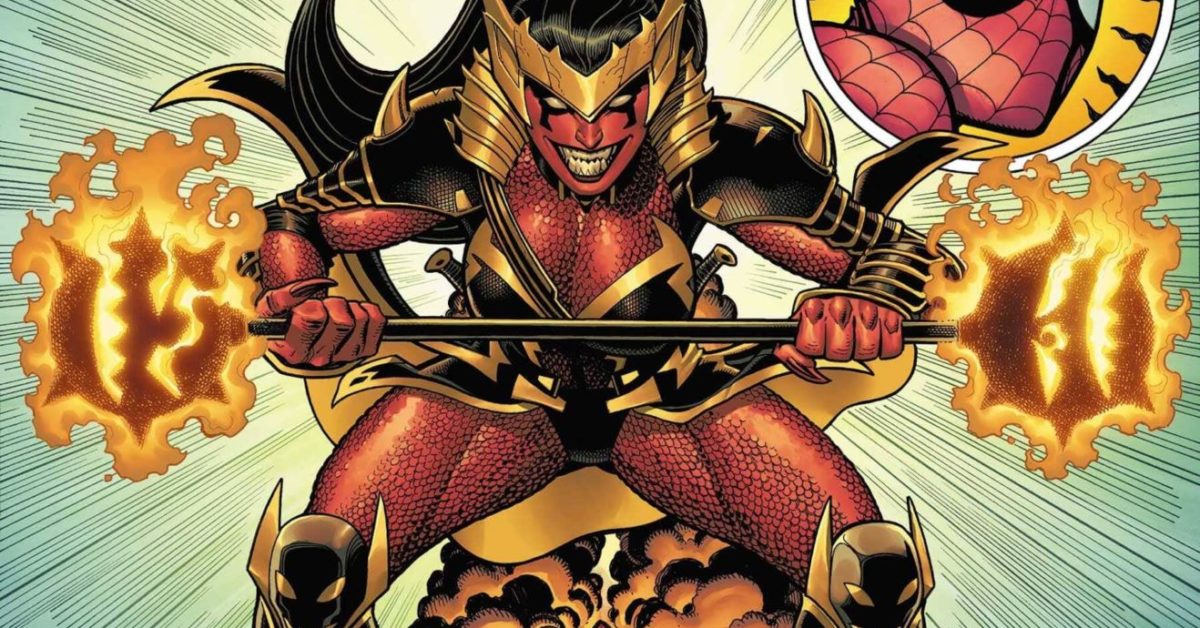 Shortly after teasing the new character on Twitter but long enough to allow us to double-dip on this story and get paid twice for writing the same thing, Marvel has revealed more details about the upcoming Spider-villain, Queen Goblin, who will debut in Amazing Spider-Man in February. A press release from the House of Ideas explains:

As seen in a series of teasers today, Spider-Man’s life has been plagued by Goblins for almost 60 years. And this February, a brand-new one will glide into Ben Reilly’s life to continue this tradition. Brace yourself for the introduction of QUEEN GOBLIN!

Patrick Gleason had the following to say about designing the character:

When Nick and Zeb asked me to help with character design for QUEEN GOBLIN in Beyond I was thrilled. We went New-Medieval with some tweaks on the old Goblin toys. What’s even more fun is letting her off the chain and watching the rest of the art team like Arthur Adams run with her. The writing team has been working like crazy to make her debut worthy of a Queen. I’m writing a scene now that will hopefully melt some brains too.

Marvel editor Nick Lowe also had a quote in the press release, but no one cares what editors have to say. In addition, Marvel revealed that Green Lantern writer Geoffrey Thorne will write a .BEY issue of Amazing Spider-Man, as well as plans or February’s issue of Miles Morales: Spider-Man.

Also coming in February will be a special one-shot written by Geoffrey Thorne with art by Jan Bazaldua and Jim Towe. AMAZING SPIDER-MAN #88.BEY will feature the return of the fan favorite Super Hero team THE SLINGERS! You didn’t think the Beyond Corporation only had one hero on their payroll? Watch as Hobie Brown ascends to new heights as the Hornet!

Writer Saladin Ahmed and artist Michele Bandini’s run on MILES MORALES: SPIDER-MAN will also continue to be impacted by the events of the Beyond Era. Issue #35 will see Miles and Shift facing off against Space Stone-host Quantum and the Assessor. And their only hope at victory lies with the Beyond Corporation.

Below, check out concept art for Queen Goblin and covers for February’s Spider-books. Now, let’s see if Marvel can give us an excuse to write about this for a third time today.

Talking Point: What Are You Playing This Weekend? (December 4th)
A Year of Free Comics: Close encounters of the weird kind in HELION
Version 13.0.1 of Super Smash Bros Ultimate coming soon
SDCC ’21: The secrets of writing dark speculative YA are laid bare
Vault’s A DARK INTERLUDE returns with a new artist