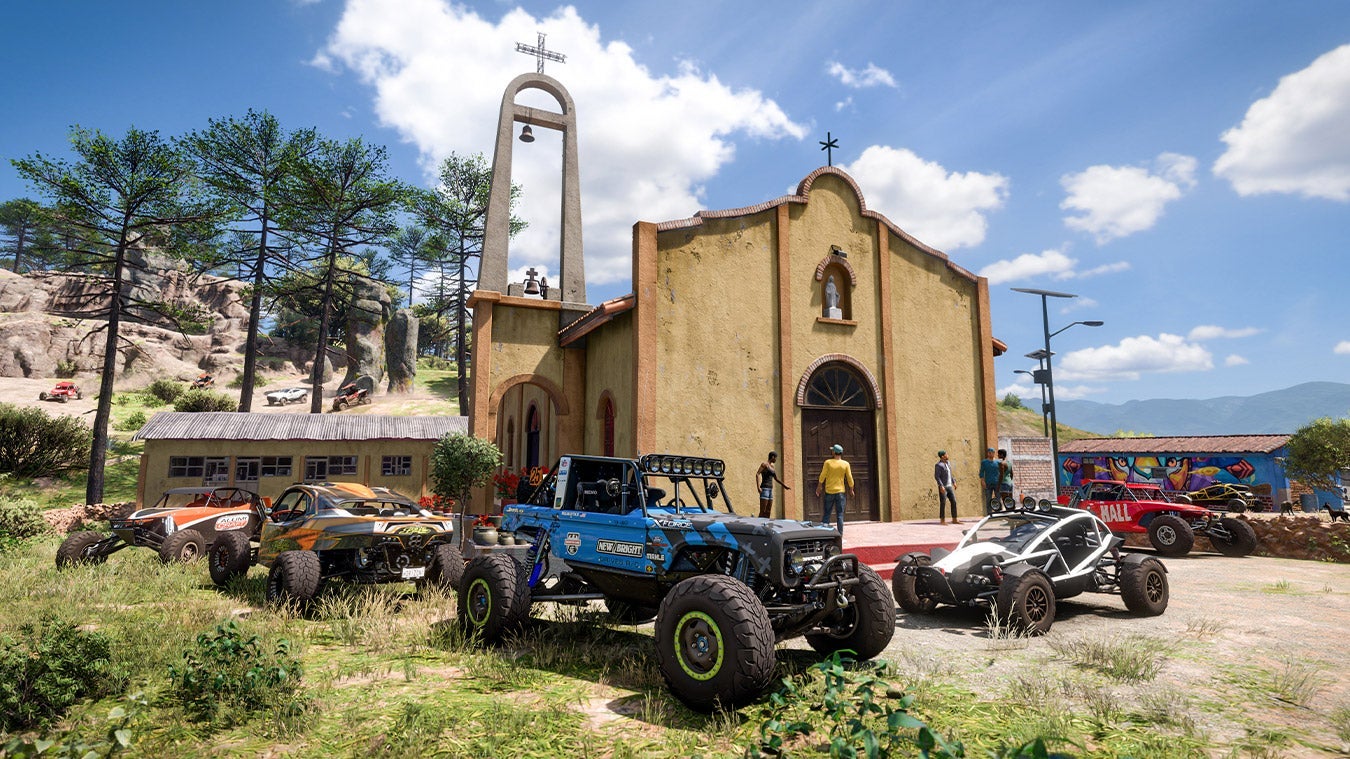 Forza Horizon 5 is a racing game. But its heart isn’t really about just racing at all. For my money, this spin-off series has built its reputation and quality around different foundations. It’s a series about culture. It’s about the mood, the tone, the feel.

Part of all that is how each vehicle literally feels as it cruises around its open world map, but a bigger part of it is that nebulous, difficult-to-describe thing the game activates within you. Many things activate this bit of the brain, like over-the-top set-pieces and silly motoring stunts – but an enormous chunk of it is about one thing: the game’s world.

This is actually probably the thing I’ve come to love most of all about Forza Horizon as a sub-series. The world itself is arguably the most prominent character of each game. This didn’t really sink in for me until I played Horizon 4, a game set in my home country that therefore spoke to me; every subtle detail and winking reference was understood. That in turn changed my perception of the fifth Horizon, which I think does an even better job of representing and channeling the culture of its setting, Mexico. I imagine it’s brilliant for those who live there just as Horizon 4 was for me, but it’s also magical for those who have never even been there.

As graphical fidelity gets better, the concept of ‘digital tourism’ becomes more attractive – something which Xbox has already enjoyed success with in Flight Simulator. Forza Horizon 5 is a more inherently video-gamey expression of that idea, though, where simply seeing these gorgeous environments is arguably as thrilling as power-sliding a supercar around their roads.

Forza Horizon 5 doesn’t mess about. It’s huge in scale and scope, glittering in its beauty, and still impressive in its ambition despite this being the studio’s fifth outing. This is rare; by this point a developer is usually phoning it in or straining against a lack of ideas. But in this instance, Playground Games keeps finding new tweaks and new ideas, most stunning of which in this game are dust storms and tropical storms which aren’t just visual punctuation, but hazards you can actively drive into or avoid. Weather has received a significant boost across the board this time around, in fact. It matches up to the rest of the experience, which feels like the hand of developer Playground Games cranking everything up to eleven – or twelve, given the previous entry already felt like it was breaking the volume dial.

Despite that feeling of a game that is throwing absolutely everything at you, Forza Horizon 5 is no less friendly. In fact, it’s a genuinely breezy experience, deploying all of the various tweaks and dials of the core Forza engine to deliver two things at once: a free-wheeling, casual-friendly open-world arcade racing experience and a realistically handling if slightly silly simulation diversion, should you wish for it. By default, the assists are generous and the AI competition (still ‘Drivatars’, based on the driving skill profiles of your Xbox Live friends) is easy – but you can crank up their intelligence and down the help if you want a hardcore challenge.

With that said, I don’t really think challenge is where Horizon is most at home anyway; it wants to be played for fun, the sort of game that soars when you take it casually, the ultimate thing to kick back to with a beer on Friday night. Sometimes it’s surprising just how well the game manages to maintain this mood even while having a map that becomes icon soup, seemingly endless events and challenges spawning utterly everywhere. These sorts of maps sometimes make me feel overwhelmed in other games (heya, Ubisoft) – but not so here. The game’s tone is too welcoming to allow it to stress you out.

This much is demonstrated most keenly in the game’s story and cast; you are a ‘superstar’ driver who can seemingly afford any car and isn’t afraid of everything. Everybody worships you, and everybody is relentlessly upbeat. There’s not even a snippy asshole rival in play – you’re just here to enjoy this epic festival and make memories. And it is memorable, to the credit of its design.

The rest is, to some degree, an obvious expansion on the ideas expressed in past Horizon games. The set pieces get bigger, sillier, and more intense. Racing is a core pillar, but it’s broken up by memorable beats including a drive up, through, and back down an active volcano. The quietest moments of the game come in the customization, where you can sift through menus to tweak the look of your avatar and vehicles, or for the true gearheads fiddle with your vehicle’s specs and setup.

You likewise might want to spend quiet moments in ‘EventLab’, a new content-creation suite that lets you build custom events – though this is of course the calm before the storm, where you can then unleash your bonkers creation on your friends online through online functionality that walks the tightrope of running right through the game like a stick of rock while somehow still feeling entirely and completely fairly optional.

The way online is threaded through the game is demonstrative of one of the wider pieces of genius on display in Forza Horizon 5, in fact: it constantly threads the needle, balancing out different and often quite disparate goals to deliver a best-of-both world situation. It earns practically every win.

Let’s be clear for a moment: Forza Horizon has always been good. From the moment it burst onto the scene in 2012 as a spin-off to the core, more po-faced Forza Motorsport series, it established itself as a fun, thrilling, and subversively moreish alternative thread for racing on Xbox. It was in many ways the spiritual, open-world successor to Project Gotham Racing, and in turn traced its roots back to arcade racing royalty like OutRun. This is a tough lineage to stand up to, but Horizon 5 takes all that history and experience and runs with it, incrementally upgrading this series into must-play brilliance. It’s an achievement of a game.

Disclaimer: Tested on Xbox Series X. A copy of the game was provided by the publisher.