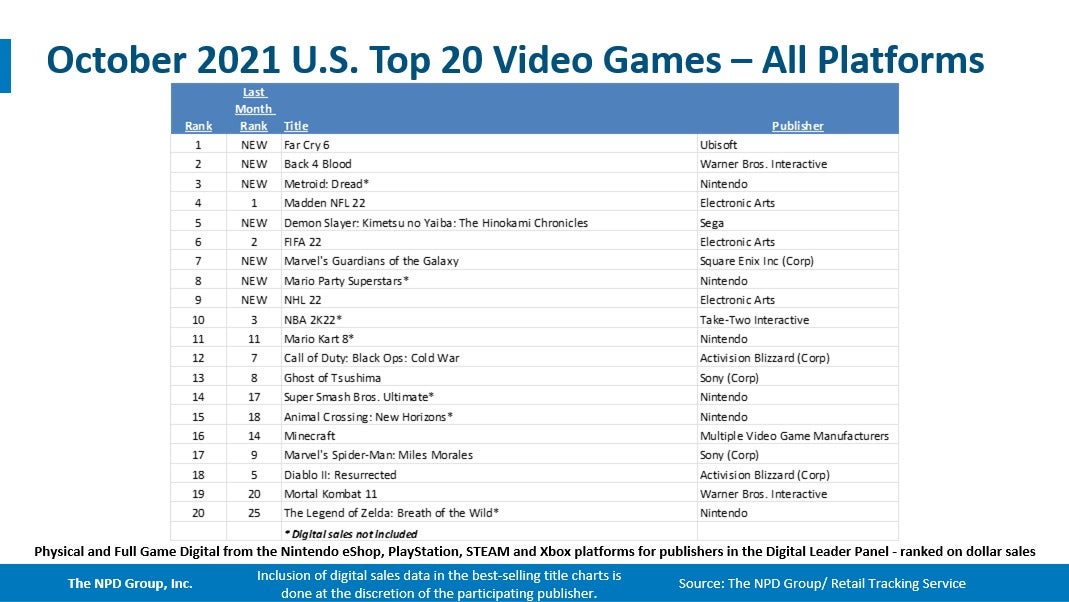 Far Cry 6 and Switch were the best-sellers for October in the US, according to the latest NPD report.

The NPD October 2021 report has been released, and it finds total industry spending for the month across hardware, content and accessories up 16% year-over-year (yoy). This was a record for October as totals reached $4.4 billion. Year-to-date consumer spending reached $46.7 billion, which is up 12% when comparing yoy figures.

Hardware sales in October were up 82% yoy to $472 million. Year-to-date hardware is up 53% when compared to the same period yoy, and is now sitting at $3.9 billion.

Back 4 Blood was the month’s second best-selling game, and was also second on both PlayStation and Xbox platforms.

Metroid: Dread was the third best-selling game, and it came in first on the Nintendo Switch chart. Metroid: Dread saw the best launch month sales of any Metroid game in tracked history with physical dollar sales almost double that of Metroid: Prime.

With accessories, spending increased 5% yoy to $158 million. Year-to-date accessory sales stand at $1.9 billion, which is a 9% increase yoy.

Halo Infinite reviews – our roundup of the critics’ scores
Random: Want To Be In A Ring Fit Commercial? You Can, If You’re UK-Based
Windows update fixes most Intel Alder Lake DRM issues on gaming PCs
Hideki Kamiya Talks About Why He’s Making Sol Cresta, And What’s Next For PlatinumGames
WWE Announces First Class of Lucky College Athletes in NIL Program