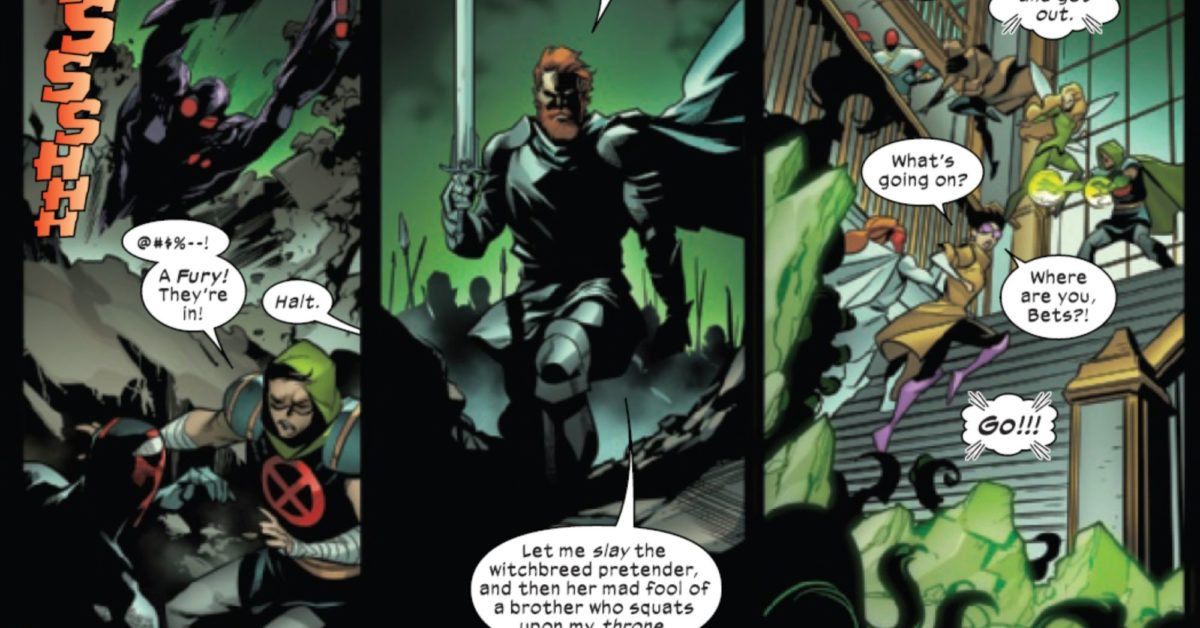 Whether you are in the United States of America or in the magical Otherworld, mutants seem to be an increasing problem, and the establishment of Krakoa only seems to have exacerbated that of late. Indeed, it has put a target on people’s heads. So, as Orphan-Maker goes after The Right to rescue his robot brother….

And courtesy of Kwannon, the new Psyclocke, the Hellions follow…

…you get an inkling of the kind of mindset they are going up against.

While in Excalibur, the old Psylocke and new Captain Britain Betsy Braddock is unnerved by Kwannon, the woman whose body she used to inhabit… Do you reckon I’ll get that no-prize? Because Excalibur is off to Otherworld to pick up the battle of the Citadel that they left off.

As Merlyn and Arthur seek to restore the patriarchal monarchy of Otherworld and kick out a) all the mutants b) most of the women and c) definitely the mutant women like Betsy Braddock.

Still, as today’s Strange Academy #15 demonstrates, Otherworld has a lot of problems that it is easy to pin on the witchbreed… I mean, mutants.

While back on Earth, the matter of the Krakoan law Kill No Man rears its head again, as Nature Girl has more of a conciliatory tone than after her previous murders.

More so than the Hellions have when they go up against the Right.

And Orphan-Maker takes that to heart.

While in X-Men: Green, Nature Girl is more accepting of her own mortality.

Mutants and kortaliuty, crime and punishment, witchbreed and magic, all a day’s work on Krakoa…

EXCALIBUR #25
MARVEL COMICS
SEP210946
(W) Tini Howard (A) Marcus To (CA) Mahmud Asrar
THE ONE TRUE KING RETURNS!
And he’s here to exterminate the witchbreed! King Arthur and his army turn Otherworld into a battlefield-again. Backed into a corner, Betsy Braddock makes a desperate choice that will reshape the realm-and mutantkind-forever. The fate of the Starlight Citadel is at stake, and if the Citadel falls…so falls all reality. RATED T+In Shops: Nov 10, 2021 SRP: $3.99

STRANGE ACADEMY #13
MARVEL COMICS
SEP210981
(W) Skottie Young (A/CA) Humberto Ramos
• The Strange Academy kids have a night on the town in New Orleans!
•  Some kids go for a tour of a famous NOLA graveyard, and I’m sure you know how teens in graveyards usually go.
•  Emily takes a field trip of her own, and we also learn the SECRET ORIGIN OF ZOE LAVEAU!
RATED T+In Shops: Nov 10, 2021
SRP: $3.99

HELLIONS #17
MARVEL COMICS
SEP210931
(W) Zeb Wells (A/CA) Stephen Segovia
RAMPAGE!
Feelings are hard. ORPHAN-MAKER doesn’t like feeling that he’s not NANNY’s little boy anymore…and what more sensible, mature action is there to take than to storm the fortress of their enemies THE RIGHT in a bid to get back in her good graces? Before the day is through, there will be some dire consequences… PARENTAL ADVISORYIn Shops: Nov 10, 2021 SRP: $3.99

Soul-Packed Action Game Unsouled, Now Available via Xbox Game Preview
Everyone Knows Roy Harper Is Alive Except For The Roy Harper Academy
A Year of Free Comics: Are you HELLBOUND?
Black Friday deal spotlight: Free parking for your butt on this Razer Iskur gaming chair
Marvel Finally Explains How to Read Its Comics with Digital Release