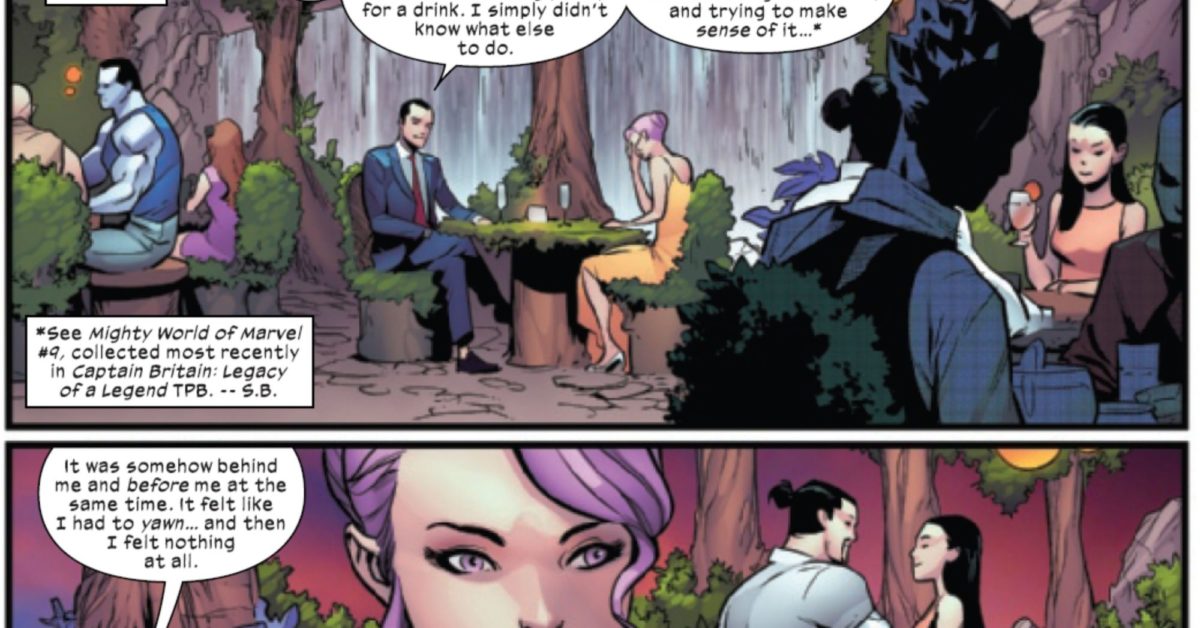 I haven’t tried for one of these in a very, very long time., Maybe three or four decades ago. But here we go. A Marvel No-Prize is a fake or satirical award given out by Marvel Comics to readers.  Initially awarded simply for identifying continuity errors, a No-Prize was later given only when a reader successfully explained why the continuity error was not an error at all. Basically, doing Marvel’s editorial work for them. So here we go with Excalibur #22, out today, and Tom Lennox meeting up with his old girlfriend Betsy Braddock, the new Captain Britain. Tom was recently resurrected a very long time after his death and, for Betsy, there’s been a lot of water under the bridge since. Just not so much for Tom.

Slaymaster was the assassin hired by Vixen to kill the psychics of S.T.R.I.K.E. including Betsy Braddock. But that’s not how Tom died.  Sure, some of the psychics were indeed killed directly by Slaymaster in such a fashion. Such as Vicki, though more by spike than blade…

But Tom? He survived the Slaymaster assault and lived with Betsy in the Braddock residence until he was killed by one of Sir James Jaspers’ Beetle monsters.

It’s not like modern Marvel are unaware of this… in previous issues it was even stated in the text pieces.

So how to explain away what seems a rather personal flub? Maybe… when Tom was revived in Krakoa by the Five, it was such a long time ago that… his mental memory-gram had rotten away a bit? Maybe in the resurrection procedure, Xavier managed to get the memories of Vicki’s death mixed up with Tom’s? He is a psychic after all, could that make him more vulnerable to such a corruption? Especially since the resurrected Vicki is in the vicinity and pops by…

And yes, Vicki Reppion is named after John Reppion, by a friend of John’s who added it to the Marvel Universe Handbook. Still no reason as to why But why was Avril Davis of S.T.R.I.K.E. not revived with the rest of her friends. Was her memogram just too rotted away? And what about Denis Rush, Andrew Hornby, Leah Mickelson, or Stuart Hattrick?

EXCALIBUR #25
MARVEL COMICS
SEP210946
(W) Tini Howard (A) Marcus To (CA) Mahmud Asrar
THE ONE TRUE KING RETURNS!
And he’s here to exterminate the witchbreed! King Arthur and his army turn Otherworld into a battlefield-again. Backed into a corner, Betsy Braddock makes a desperate choice that will reshape the realm-and mutantkind-forever. The fate of the Starlight Citadel is at stake, and if the Citadel falls…so falls all reality. RATED T+In Shops: Nov 10, 2021 SRP: $3.99