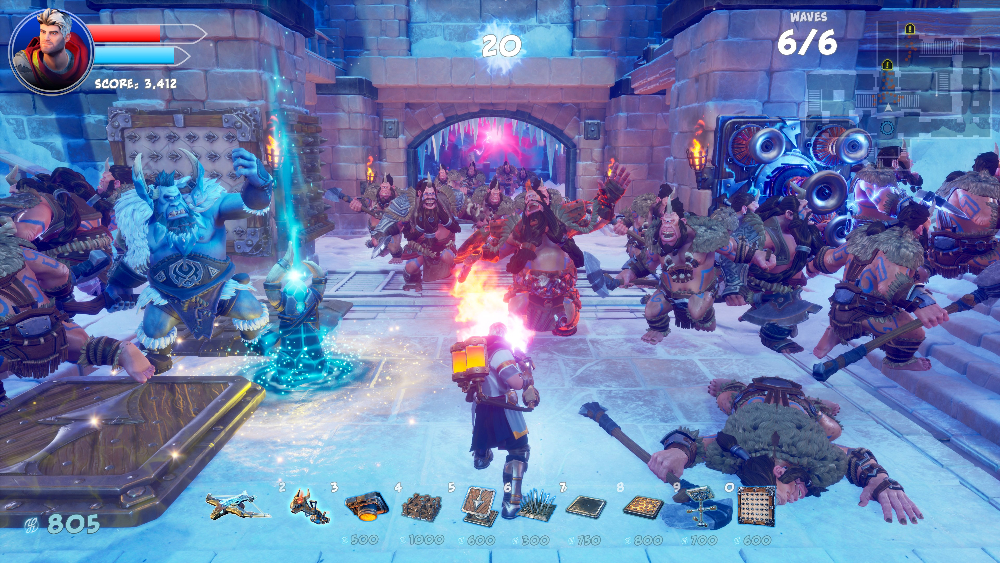 We’ll admit to being more than pleasantly surprised by Orcs Must Die! 3 when it released earlier in the year. In fact, taking into account the lovely art style, the absolutely huge campaign and the chance to make good of the strategic traps, we were pretty much bowled over by the little gem. Now though it’s time to head back in and smash up some more Orcs with the latest DLC pack for Orcs Must Die! 3 – Cold as Eyes.

If you’re willing to sacrifice more hours than you care to imagine to the gameplay of Orcs Must Die! 3, then getting hold of the Cold as Eyes expansion is pretty much a must.

It’s priced at £6.69 and available to add in to your game today, no matter whether you are playing on Xbox One, Xbox Series X|S, PS4 or PC. Doing so will enable you the chance to make the most of a host of new gameplay features, ideas and – best of all – traps, all as you battle the new Cyclopean race.

These are no ordinary foes though, as the Cyclopean’s come with Shamans on tap, with their magic capable of disarming any trap they see fit. Further to that, the inclusion of the Cyclops Mesmerizer will track foes with its powerful arcane eye ray, whilst any and all can help dying Cyclops at will, ensuring they survive just a little longer than the norm.

The Cold as Eyes DLC however does bring forth new ideas for the player too. not only have two new scenario maps been added to the Endless mode – Master’s Courtyard and Hidden Dock – but the DLC adds in three extra scenarios, each which its own unique icy setting. There’s a Flamethrower to hand too, a powerful secondary breath attack and a Cyclopean Gaze trinket which can turn anything and everything to stone. Throw in a new Molten Gold trap, and the chance to enjoy a special coin drop, and Cold as Eyes certainly delivers on the features front.

You can see how all this plays out by taking in the trailer below, but honestly, if you’ve got access to Orcs Must Die! 3 already, and need a reason to head back in for some Orc head smashing, this is probably as good as it’s going to get.

You’ll find the DLC from the digital store of your choosing. Ours being the Xbox Store. Let us know if you decide to grab it.

In Cold as Eyes, Warmages must now battle against the mighty Cyclopeans across three new maps! To help hold off the hordes, Cold as Eyes also adds new tools for Warmages including the Molten Gold Trap, Cyclopean Gaze Trinket, and a Flamethrower.