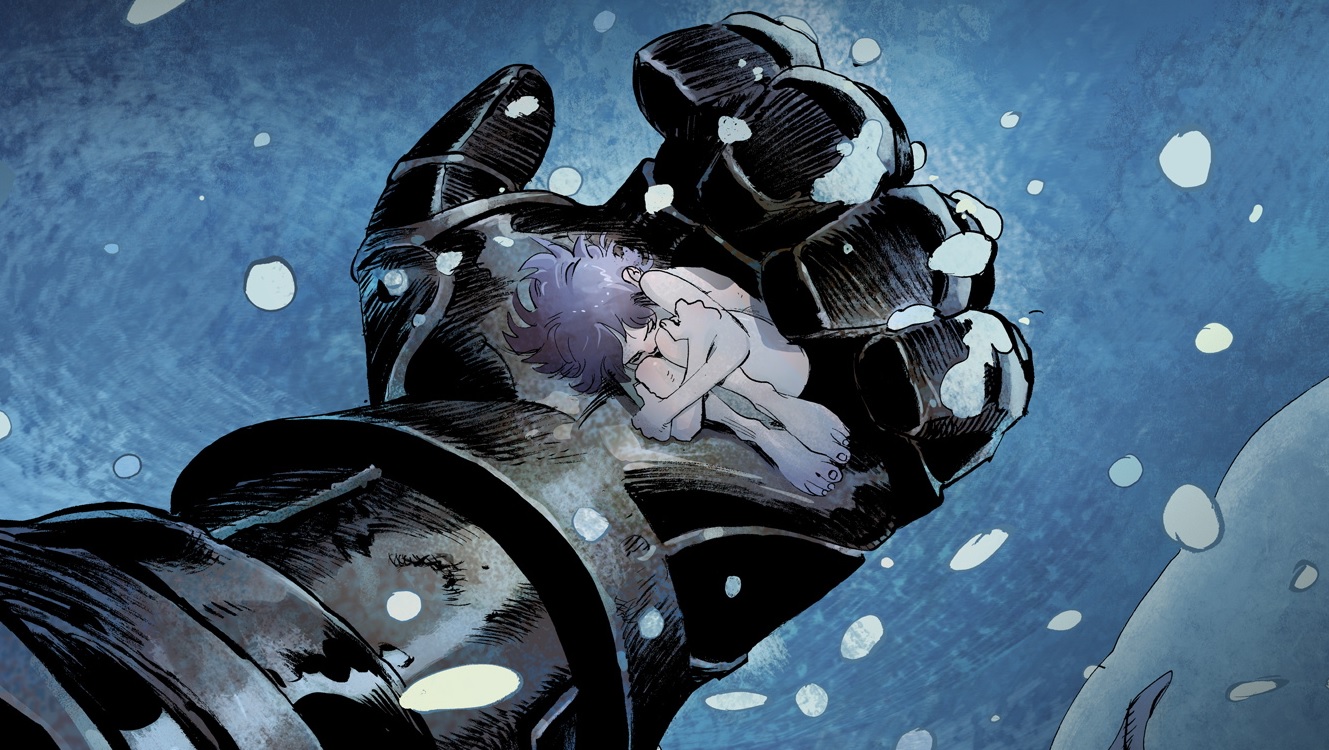 Back in 2018 writer Si Spurrier and artist Matías Bergara launched Coda a creator-owned fantasy series from BOOM! Studios. Spurrier and Bergara are teaming up once again along with colorist Matheus Lopes for Step By Bloody Step, a bittersweet fantasy opus limited series from Image Comics.

Grand Prix and multiple Eisner award nominees Si Spurrier (X-Men), (Coda), and Matheus Lopes (Supergirl) present Step By Bloody Step: a bittersweet fantasy opus about a nameless child and her giant guardian, which is completely text free. A miniseries in four double-sized issues, this watershed moment in modern comics is a co-production between Image and Éditions Dupuis, with the U.S. edition’s #1 issue out from Image in February 2022 and the French edition—to be titled Saison de Sang—from Dupuis slated for June 2022.

Step by Bloody Step is an exquisitely designed story that puts the awe-inspiring artwork front-and-center, showing off what comics are truly capable of and eliminating language barriers in a unique and compelling way.

On Twitter, Spurrier shared interior art from the series.

STEP BY BLOODY STEP. My new creator owned project with @matiasbergara, @_matlopes_ and @TinyMaster. A dialogue-free fantasty spectacle, co-published in ’22 by @ImageComics and @EditionsDupuis.
It is, in a word, beautiful.

You’ll be hearing more about this. And not just from us. pic.twitter.com/9CY2PYBGHo

In a statement announcing the series, Spurrier discussed reuniting Bergara for another project:

“My last collaboration with Matías Bergara, Coda, has picked up awards and nominations everywhere it’s gone. We knew our follow-up had to be even more ambitious. We set our sights on nothing less than a step-change in fantasy comics,” said Spurrier. “Step By Bloody Step resounds with all the elements I love most—magic, mystery, monstrosity and the bond between two lost souls—but above all it’s an opportunity for Bergara and Lopes to shatter your senses with peerless storytelling spectacle and raw emotion. Love, after all, transcends any mere language.”

“For the first time in my career, I can indulge myself in the very challenging task of telling a story purely through images. And what a story it is. We put all our skill and hearts into it for all of you.”

Some of the early praise for the miniseries:

“A gorgeous tale of humanity and love.” —Tula Lotay

“The best artists of their generation presenting masterful storytelling and astonishing visuals. Reminds me why I love comics so much.” —Rafael Albuquerque

“One of the most absurdly beautiful books of the year.” —Bilquis Evely

“I love anything these guys do, but nothing more than this.” —Mark Millar

“Beautiful story. Reminds us why comics are a visual medium.” —Gabriel Bá

“Haunting, ethereal and above all visually stunning.” —Al Ewing

“Entirely without words, this beautiful fantasy will leave you speechless too.” —Kieron Gillen

“Do not miss this stunning visual storytelling.” —Matt Wilson

“Jaw dropping beauty… storytelling at its purest and most elegant.” —Declan Shalvey

“How could one resist the invitation to join this journey? Let’s go!” —Leandro Fernández

“Spurrier, Bergara and Lopes have created something that celebrates everything comics can be; mysterious, inventive, bursting with imagination and also incredibly heartfelt without ever saying a word. Right to my pull list.” —Jeff Lemire