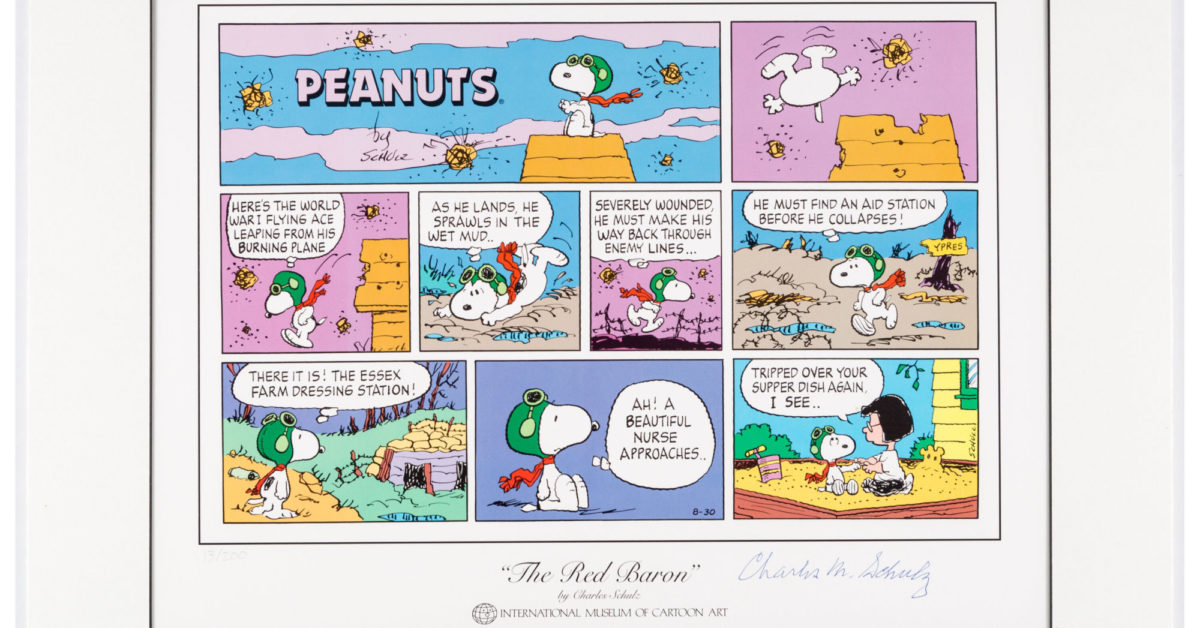 Cartoonist Charles M. Schulz originally launched Peanuts in October 1950 as a daily newspaper comic. The early strips showed a style that fans of the iconic franchise may find far different from the style that is now associated with the title. Schulz would develop this instantly recognizable style after years of working on Peanuts, with it becoming a Sunday strip in January 1952. The strip introduced a long list of beloved characters, including the strip’s lead, the perpetually down-on-his-luck Charlie Brown, Linus, Lucy, Peppermint Patty, and, of course, Snoopy. Snoopy is the heart and soul of Peanuts. He is Charlie Brown’s dog, but also so much more. Snoopy is an imaginative and introspective Beagle who acts out elaborate fantasies and even writes on a typewriter. One of the more popular fantasies is Snoopy’s role as the War War I Flying Ace, which has gone on to have a life outside of even the Peanuts strip. There was a War War I Flying Ace commemorative postage stamp featuring Snoopy released in 2021. Snoopy as the War War I Flying Ace is even the logo of the Charles M. Schulz Airport in Sonoma County. Now, you too can celebrate Peanuts and the War War I Flying Ace with this item up over at Heritage Auctions.

This lithograph print features Snoopy as the WWI Flying Ace. This is one of the most desirable running troupes in the beloved comic series. The Sunday originally ran on 8-30-1992. This print is signed and numbered just below the 15.25″ x 10.5″ image area. Matted to 23″ x 18.5″. In Excellent condition.

All Snoopy-lovers can now head over to Heritage Auctions right here, where the auction for this lithograph print from Charles Schulz’s Peanuts is now live. Best of luck to everyone hoping to bring this one home!