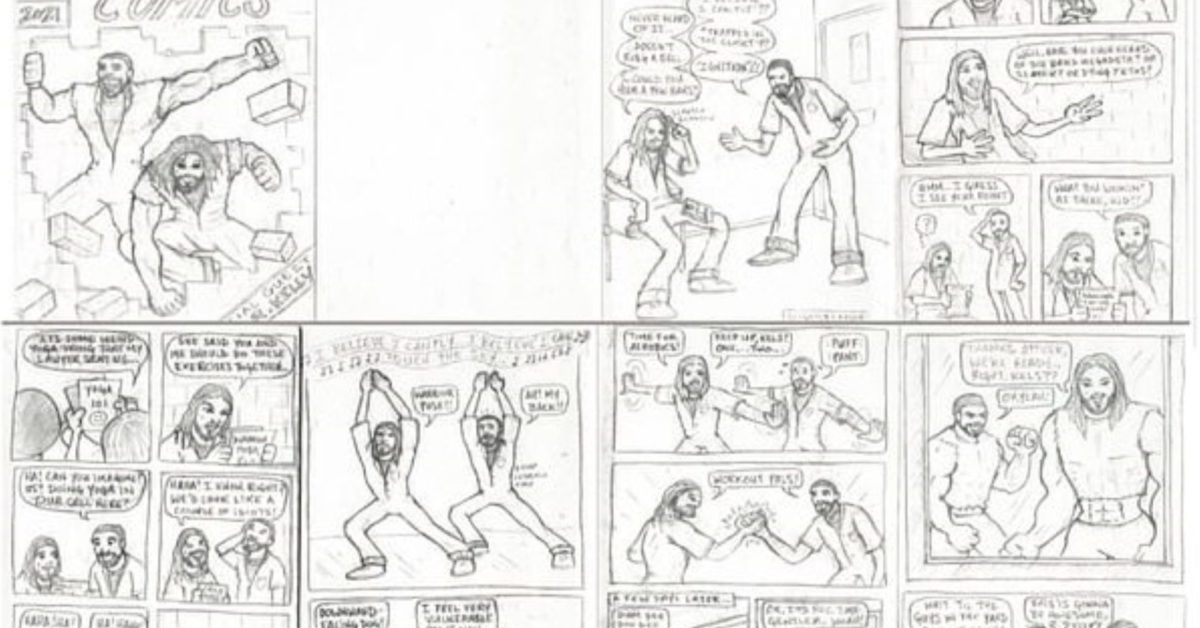 Brendan Hunt, who was found guilty to threatening to kill Democratic Congress members after the events of the 6th of January 2021, has submitted testimony to the Brooklyn Federal Court in the form of comic books to the US court in an attempt to get himself released. While in custody alongside R Kelly, awaiting trial for sex-trafficking charges, Hunt created the comics that show them both discussing music and doing yoga together. Including that Brendan Hunt had never heard of R Kelly or his music.

Hunt depicts R Kelly as complaining “I’m the greatest R&B star in human history! How can you not know of R. Kelly?” the singer asks in the comic adding “Millions of babies have been conceived to my records!”. To which Brendan depicts himself replying “Well have you ever heard of the band Megadeath? Or Slayer? Or Dying Fetus?” with R Kelly replying “I guess I see your point.”

And then the pair of them doing yoga exercises from Hunt’s Yoga 101 book, sent to him by his lawyer, from the Warrior Pose to Downward Dog with R Kelly stating that “I feel very vulnerable right now” only for them both to be blessed with muscular figures as a result, with Kelly saying “Oh, yeah! Wait till the guys in the yard see our gains!”

Hunt also submitted another comic book about another inmate named Garcia who worshipped an idol called ‘Orshroom’ that he feeds bananas. This was all justified by Hunt’s attorneys filing a motion to the court that his artistic expression was a form of rehabilitation. “These are comics and intended to be light. But we think they capture something more profound about the humanizing commonality that can be found even in the most dehumanizing conditions.”

Hunt had been found guilty in April of urging people to “kill your Senators” in videos posted online and was arrested by the FBI on the 19th of January. Posts also included calling for Trump to hold a public execution of Nancy Pelosi, AOC, Schumer, calling for firing squads to “mow down these commies”, with descriptions of immigrants as “low IQ mongoloids”, called New York City “Jew York City” and blamed immigrants for Trump’s loss against Biden. His sentencing is set to take place on the 22nd of November.