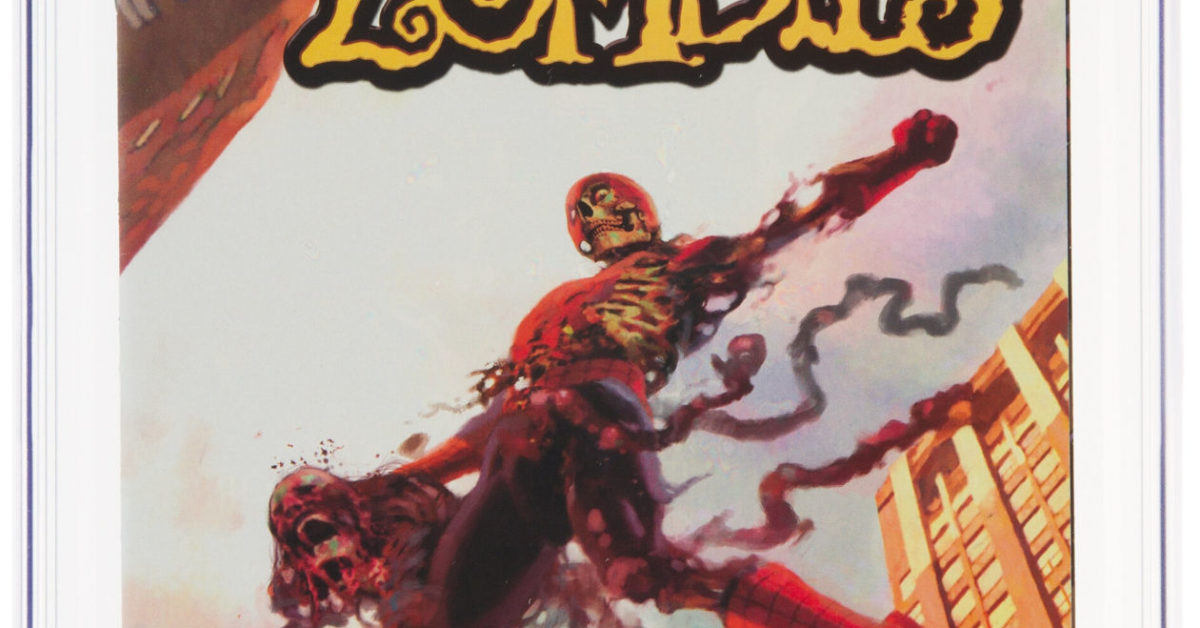 Marvel Zombies fans had a good fall, as the What If? Disney+ show had an entire episode devoted to the horror corner of Marvel Comics. Not to mention the line of Funko Pops and Zombie Captain America Marvel Legends figure selling well enough that there might be many more on the horizon. Yes, the Marvel Zombies universe s going nowhere anytime soon, and that is why Marvel Zombies #1 is always a smart pick-up. Written by Robert Kirkman, this is not the first Marvel Zombies universe that was in Ultimate Fantastic Four #21. But this one, featuring an homage to the cover for Amazing Fantasy #15, is the one collector’s love to get. Heritage Auctions is taking bids today on a CGC 9.6 copy, which is currently sitting at only $42. Check it out below.

“Marvel Zombies #1 (Marvel, 2006) CGC NM+ 9.6 White pages. Amazing Fantasy #15 cover swipe by Arthur Suydam. Sean Phillips art. Story by The Walking Dead creator Robert Kirkman. Overstreet 2021 NM- 9.2 value = $40. CGC census 10/21: 282 in 9.6, 206 higher. After sending a young Reed Richards back to his home reality with the last human survivors, Magneto stays behind to destroy the inter-dimensional portal. He succeeds, assuring that the zombies remain trapped in their home reality… but also that he is trapped with them. In the ruins of the Baxter Building, Magneto finds himself surrounded by a horde of zombified heroes, including Spider-Man, Colonel America, Thor, Daredevil, Moon Knight, Giant Man, Luke Cage, Angel, and Wolverine. The zombified heroes try to talk Magneto into surrendering. Spider-Man tells him the fight is hopeless, and Daredevil adds that it’s clear he’s about to pass out. Colonel America offers a painless death, but Wolverine says he’s been waiting too long to take a piece out of Magneto to let him die without a fight.”

Most of all, these books were fun. Any Marvel Comics fan should have these in their collection, and why not a gorgeous CGC copy? Go here and get more info and place a bid. While there, check out all of the other books taking bids.

Share of the Week: Glowing
Microsoft Says 20 Percent of Xbox Cloud Gaming Subscribers Use Touch Controls Only
Webb
Respawn’s Vince Zampella to head up Battlefield franchise and has plans for a connected universe
Gallery: Here’s What Zelda: Breath Of The Wild Looks Like With Raytracing