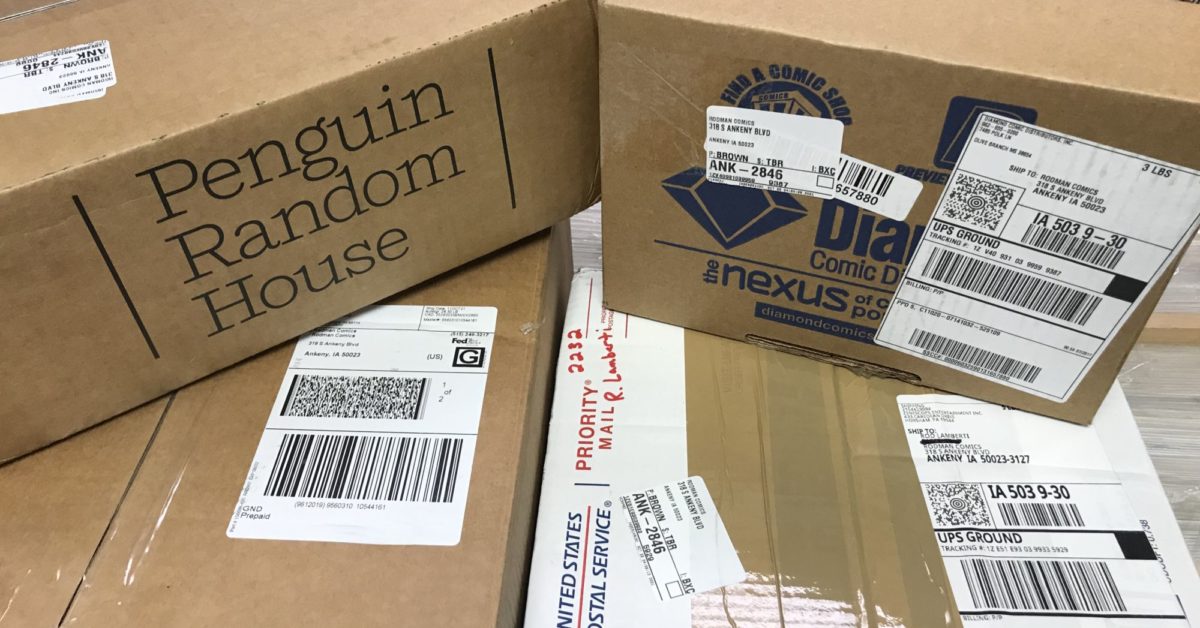 Shipping comics to comic stores along with games and comic-related supplies used to be very different. Want comics, games, and comic-related supplies soon? Good luck with that. In 2021 another odd thing has been the issue with shipping comics; I was not expecting that.  Penguin shipping Marvel comics in a simple box surprised me. Not a thick box or one with any packaging of any kind.

My paranoid thought before ordering through Penguin was to wait and see how it shakes out.  Perhaps wait a month or two to make sure it all is good. Why did I not listen to myself? Greed. I wanted those “one per store variants” that Penguin offered. I also thought that I was being paranoid.  I thought Penguin has been shipping books for years, so they know what they are doing. Whoops, comic book shipping turned out to be a challenge for them.  In the first two weekly shipments, we were lucky and dodged any major issues. Other stores were not so lucky. Now it looks a lot better; their shipments include bubble wrap.

Those one-per-store comic variants from Penguin dropped in value from what they were first going for.  They dropped so quickly we still had them on hand after listing them on eBay. We re-listed them and got what we could for them.

I somehow skipped ordering our third regular comic shipment from Penguin. I figured it out before the Marvel titles were to go on sale.  We did receive the Halloween comics to give away the week I thought we would also get the regular Marvel titles. I am not sure how I overlooked ordering them. It is a new system, and I worried I would make a mistake. Even after double-checking everything, I managed to make a mistake. I am guessing that the free Halloween books that arrived the week I failed to order the new Marvel comics threw me off. I ended up ordering the Marvel titles the Monday before the release. Thankfully there were only a few coming out that week.

For us, Diamond seems to be almost new at times, as in new employees. One box from them had two items in it; over 75 percent of the box was just packaging paper. At least those two books were not damaged, shipping costs be darned. I went for weeks straight with shipping problems with Diamond right before Penguin started with Marvel. At the time, it felt like I had made the right decision to go with Penguin.

The week of October 20th, not only was I waiting for my late placed order for Marvel to arrive from Penguin due to my mistake, but we were also waiting for the comics through Diamond to arrive. For whatever reason, the comic bags arrived that we had ordered through Diamond though the box of comics that was also due with it did not. UPS dropped it off Wednesday.

Ironically, Diamond had more damages for us than Penguin did in the second week of using them.

Even Lunar recently dropped the ball for us.  A 1 in 25 variant failed to get sent to us that we ordered and were invoiced for. Now I get to sweat how much that issue will drop in value while waiting for it to arrive.

I made a second call following up an email to another supplier asking for an update on the D&D material ordered the previous week for a customer that wanted it. Even though it was on the invoice and was the reason the order was placed, the shipment arrived without any D&D material. I felt like a jerk with no real excuses and no actual date when the books might actually arrive when I talked with the person who wanted it. He can easily get the books elsewhere. That is something I do not want to happen as a retailer, though if I can not get at least an answer, I do not blame him if he had ended up going elsewhere.

For the last few weeks, one of our gaming vendors has been making us do COD (Cash on Delivery). I thought it was just a one-time deal while they switched credit card processors, but no, weeks later, still doing it.  I forgot just how much a pain COD is. Why is it a pain? Someone needs to be on hand to pay for the delivery driver.  Our deliveries may be in the morning or afternoon; the time is totally out of our hands. We open at noon Monday and at 11 on Wednesdays. So, if the shipment makes it in before we open, we are going to miss the driver.

Wizards of the Coast recently released this statement, “Due to unavoidable production delays; set boosters will not be available for the upcoming Innistrad: Crimson Vow Prerelease on November 12th in North America.” Not great news for those wanting set boosters on November 12th.

Without reliable vendors to ship products to us, we very well could lose business. After doing so well this year, people could stop using us for their collecting and gaming needs due to things completely out of our control. Damage product is not material people want to buy. No product on hand makes sales impossible.

Even our shipping out product sold could prove a challenge in the future. Cardboard is getting tougher and tougher to come by. Once the comic and card boxes on hand have run out,  will we be able to get more back in for a reasonable price? Why not stockpile right now? It is what we have been trying to do. Comic boxes are hit and mix when ordering.  I had one customer buy ten comic boxes because he was thrilled we actually had them on hand. Currently, we have cartons in the backroom of comic boxes.  The backroom is currently packed. Right now, we are once again waiting for more comic backboards. We give out free comic bags and boards for each purchase of a new comic.

It is challenging everywhere.  I was talking with a person who manages a movie theater; they are having trouble getting straws of all things. One of their vendors told them they could supply them though they would have to order at least a pallet of them. They do not have room for a pallet of straws.

Shipping was something I took for granted.  Out of a D&D book? Simply reorder more, and they would be received within a day or two.  Not anymore. More and more people stop in thinking a new comic is out; then I look it up and let them know it has still not come out yet. Delays keep getting worse.

This week Diamond and their sister company Alliance both have their websites down. I received an email from Alliance to check an order, hard to do with their website being down. As of me typing this up, they have both been down for two days.

If only we could just ship all our problems away. That is not how life works. We will keep trying our best and hope to ride this all out and hope our customers stick with us.