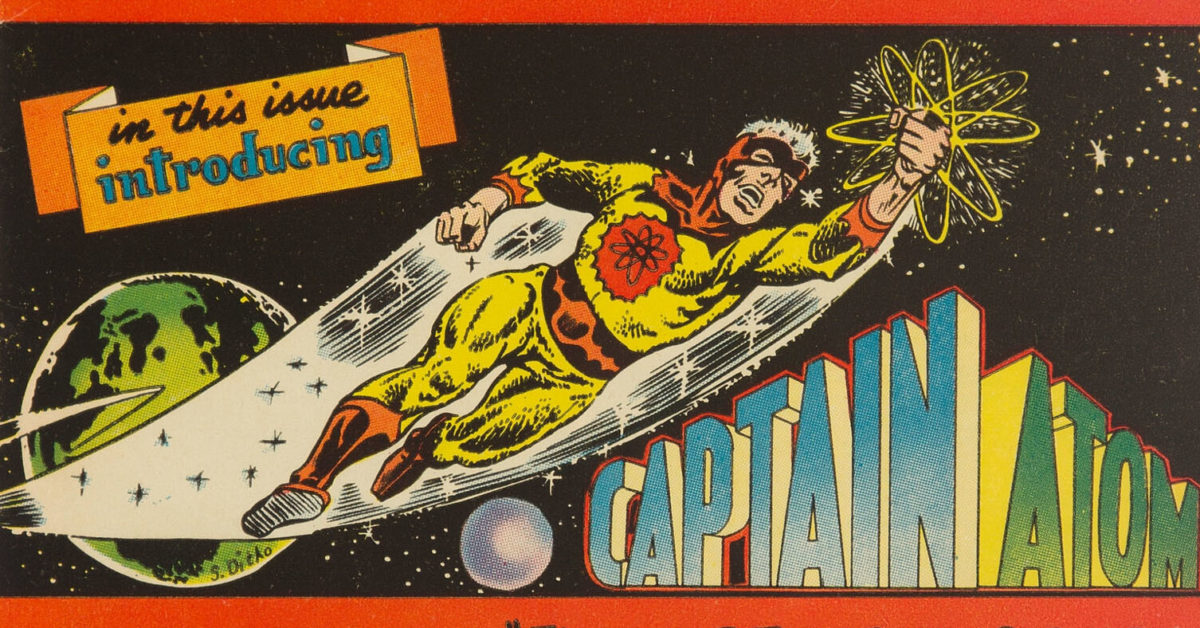 A scientist gets caught in the wrong place at the wrong time during a military bomb test. Instead of killing him, the radiation blast transforms the man into a being of unimaginable power. Sounds like a lot of Marvel superhero origins in general, and the creation story of the Incredible Hulk in particular.  But over a year before Marvel would use variations on this theme repeatedly, creators Steve Ditko and Joe Gill would use it to excellent effect in Space Adventures #33, cover-dated March 1960 from Charlton Comics. There’s a copy of Captain Atom’s first appearance and origin in Space Adventures #33 (Charlton, 1960) CGC VG/FN 5.0 Off-white pages up for auction in this week’s 2021 November 7-8 Sunday & Monday Comic Books Select Auction #122145 at Heritage Auctions.

Steve Ditko’s talent and career on such comics has become deservedly well known, but it’s Joe Gill‘s part in this tale that interests me in the case of Captain Atom’s origin story.  Through a wide-ranging career at Charlton and elsewhere — and as I noted recently in regards to the first appearance of Peacemaker in Fightin’ Five #40 — Gill had a knack for weaving specific military hardware and events into the fabric of his stories.

The Space Adventures #33 Captain Atom story is full of such details.  The fateful rocket mishap is referenced as taking place on an Atlas rocket, and identifiable as such as drawn by Ditko. Atlas rockets had by then already become famous as part of Project Mercury, and as part of the United States’ first ICBM program. A Jupiter rocket is also identified as a part of the story involving a sabotage plot foiled by Captain Atom.

But the most fascinating aspect of the story which borrows from real-life involves Captain Atom’s origin moment itself.  The man who would become Captain Atom was caught inside a missile preparing to launch an atomic warhead test “preset to explode in space.”  This is almost certainly a reference to Operation Argus, a series of high-altitude 1.5 kiloton nuclear detonation tests of up to nearly 500 miles above Earth.  The secret tests were conducted in August-September 1958 and uncovered by the New York Times in a March 19, 1959 story — likely just a few months before this Captain Atom story was being created.

View the certification for CGC Certification ID 1974580018 and purchase grader’s notes if available.

Sting to perform song from Arcane, the League of Legends’ animated series, at The Game Awards 2021
Graveneye: A Flawed but Deeply Personal Transgressive Gothic Horror
VIDEO: How to seize the attention of the streaming generation
Jane Foster, Valkyrie And Namor To Join The Avengers?
S.W.O.R.D. #10 Review: A Big Swing