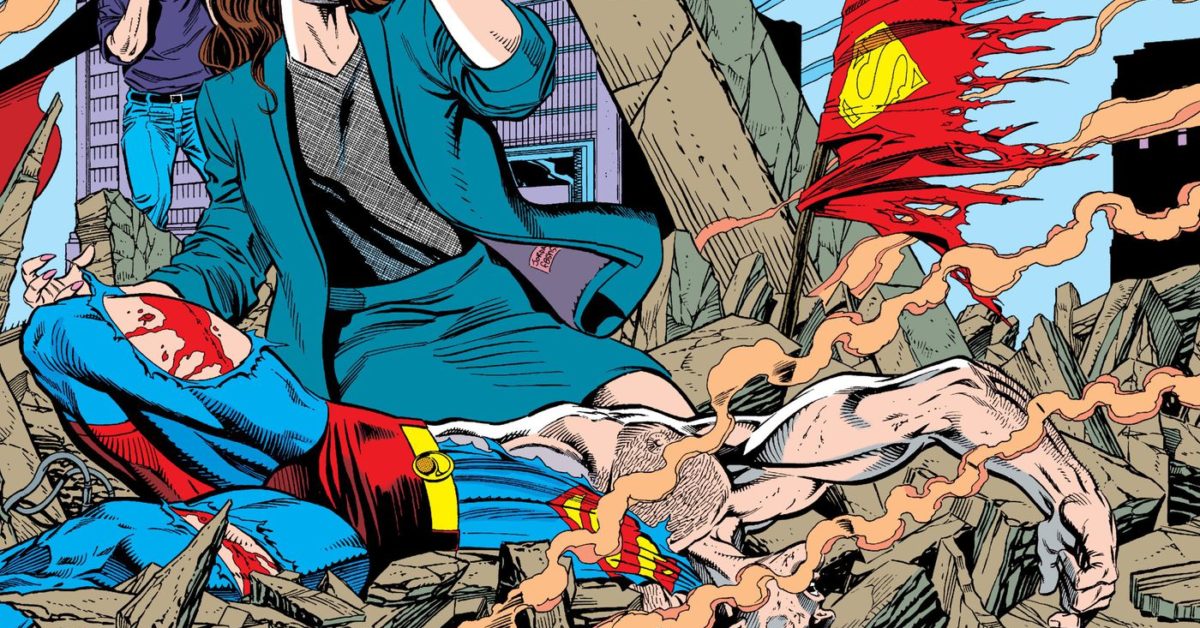 Bleeding Cool first asked this question back in March, if DC Comics was to bring us another Death Of Superman event in 2022.

In 1992 and 1993, DC Comics killed Superman. And the world noticed. The first comic book event that got actual international attention, as Image Comics was launching and pushing DC Comics into third place in sales, this was the fightback, though no one could see how big it would be at the time. The crossover originated from editor Mike Carlin and writers Dan Jurgens, Roger Stern, Louise Simonson, Jerry Ordway, and Karl Kesel, began in December 1992 and lasted until October 1993, published in Superman, Action Comics, The Adventures of Superman, Superman: The Man of Steel, Justice League America, and Green Lantern. The final issue, Superman #75 in which Superman and Doomsday killed each other with a final blow, was published in a black sealed polybag and sold over six million copies. Since then the only superhero comic book to have sold anywhere close has been Dav Pilkey‘s Dog-Man. Development began after a planned story, in which Clark Kent and Lois Lane would be married, was postponed to coincide with a similar storyline in the television series Lois & Clark: The New Adventures of Superman. While pitching possible replacements, Ordway jokingly suggested that they should kill Superman. As Superman comic sales had declined in recent years, the writing teams felt the character had been taken for granted and decided to temporarily kill him to emphasize his importance. They wanted the crossover to surprise readers and show that the star was not invincible.

And now DC Comics are teasing that it is back. This week sees the publication of the much-teased WarWorld Saga with Action Comics #1036 by Phillip Kennedy Johnson, Sean Lewis, Daniel Sampere and Sami Basri which is pitched as “After learning of an enslaved race with mysterious ties to Krypton, Superman and the Authority travel across the galaxy to dethrone the new Mongul and liberate Warworld. Introducing new characters and a new corner of the DC Universe, the biggest Superman event since the Death and Return of Superman begins HERE!”

The biggest Superman event since… or a repeat of? In recent Superman comic books, Jon Kent learned in the 31st century that his father, Clark Kent, was to die around now. Though the details were sketchy, an attack by another dimension part of the future’s historical record was meant to tie into Superman’s demise. Phillip Kennedy Johnson’fiurst Superman issue teased “Jonathan Kent is back from the 31st Century and fighting cosmic threats alongside his legendary father. But when an interdimensional breach opens near Earth, Jon recognizes the creatures that emerge: the cosmic leviathans that the Legion of Superheroes credit with the DEATH OF SUPERMAN!” We learned it was a pandimensional experiment conducted by Amanda Waller to test Superman’s abilities, Clark Kent began to lose some of his powers’ strengths. Now Clark Kent is heading to WarWorld with The Authority in tow for a battle that, in the Future State version of the future, he never returns from. And Jon Kent remains a flawed Superman of Earth, fallen out with his cousin Supergirl, and having placed Metropolis in a bottle.

And in DC’s PR they bring up the death of Superman at the hands of Doomsday again. “Philip Kennedy Johnson and Daniel Sampere’s Action Comics #1036 kicks off the Warworld Saga, one of the biggest, most impactful Superman storylines in nearly thirty years. The Man of Steel has left Earth, promoted his son Jon in his place, recruited a surprising new team that isn’t afraid to get their hands dirty and embarked on a mission to liberate Warworld and depose Mongul once and for all. It’ll likely be his biggest, most challenging battle since he first crossed fists with Doomsday, and it’s one that the future-visiting Jon has warned he won’t survive. (We weren’t kidding about that Doomsday comparison, folks.)”

Might Superman die at the hands of Mongul or Darkseid? When Philip Kennedy Johnson was announced at the new Superman writer, he stated “The work I’m doing now with Phil Hester, Scott Godlewski, and Daniel Sampere is already some of my favorite of my career. All three are wizards on the page, and the massive event that we’re building up to in Action Comics is a considerably bigger swing than I ever expected to get in comics. It’s no exaggeration to say it will change Superman’s status quo forever and have a lasting impact across the entire DC Universe. The already iconic Future State: Superman: Worlds of War artwork that you’ve seen from Mikel Janín in recent months is just the tip of the iceberg of what he and I have planned together. Stay tuned, you will NOT want to miss what’s coming.”

And it all begins on Tuesday… will the great American public be fooled into buying another Death of Superman? Read a preview of Action Comics #1036 right here…