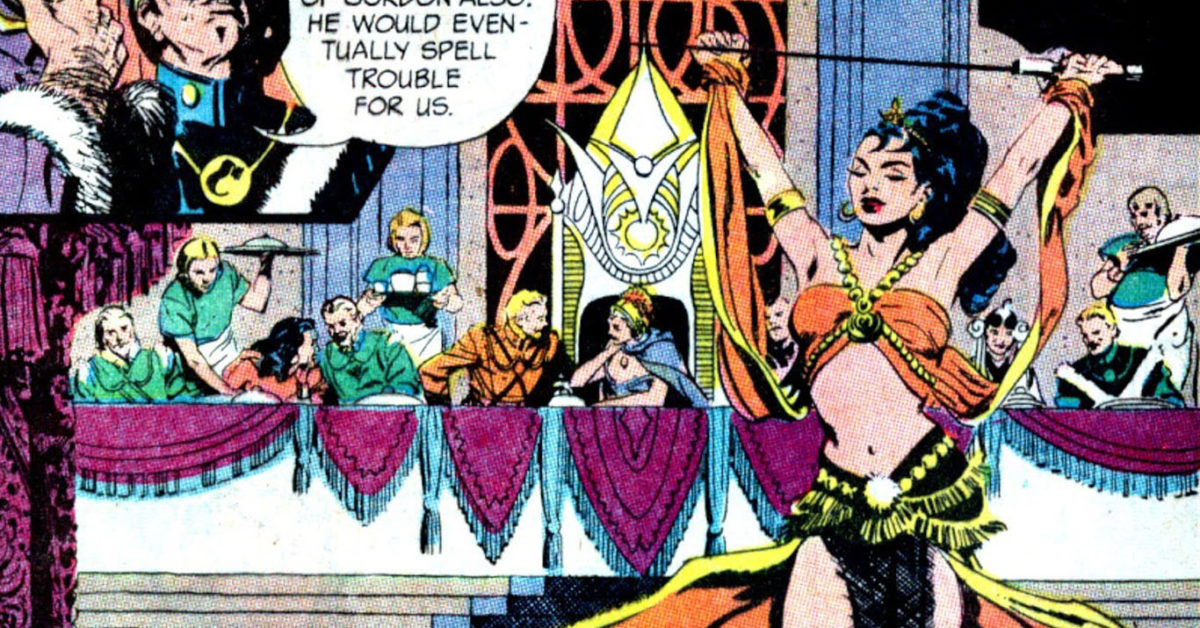 When comic book fandom as we know it today began to level up in the mid-1960s, Flash Gordon was one of the most sought-after and popular characters among collectors, even though he had not appeared in actual comic books since the early 1950s.  Burt Blum of the legendary Cherokee Book Shop told the Los Angeles Times in 1965 that he was doing brisk business selling old Flash Gordon and Buck Rogers comic books to aerospace engineers and scientists, saying, “A first edition of Flash Gordon in mint condition is worth $75 retail, and a first edition of Superman is worth $65” (and by “first edition, he likely meant Four Color Comics #10).  But while the character had a good run of mostly newspaper strip reprints in the Golden Age and early 1950s, he hadn’t been seen in new comics in quite some time by the mid-1960s.  And when Flash Gordon finally re-emerged — with new material no less — in 1966 with the launch of a new comic book title from King Features… wow, was fandom ready.  There’s a Flash Gordon #1 (King Features, 1966) CGC NM 9.4 Off-white to white pages up for auction in today’s 2021 November 7-8 Sunday & Monday Comic Books Select Auction #122145 at Heritage Auctions.

Artist Al Williamson, who was already a fan favorite by this time for his EC Comics work among others, would be a perfect fit to launch the character into comic books in the Silver Age.  As he would later say, “I was paying homage to Alex [Raymond], you know. I tried to treat his creation with respect and dignity and tried to do it to the best of my ability. I find that other artists who have done Flash Gordon just don’t seem to get the feeling of the strip, you know. Flash is a noble guy and it’s kind of nice to have that kind of a hero.”

Fandom responded to Raymond’s work on the launch of the King Features Flash Gordon series with wild enthusiasm — and so did his fellow professionals.  In the 1966 Alley Awards, which was an annual comic book fan award of the period, Flash Gordon #1 won best comic book cover, best feature story and best color, with Williamson winning best penciller for the year as well.  Williamson also won the 1966 National Cartoonists Society Award for Best Comic Book for his work on the series as well.  1966 was a pretty damn good year for comic books overall, so it was an impressive debut for the series, which would last until 1982 through three different publishers.

View the certification for CGC Certification ID 1974573014 and purchase grader’s notes if available.