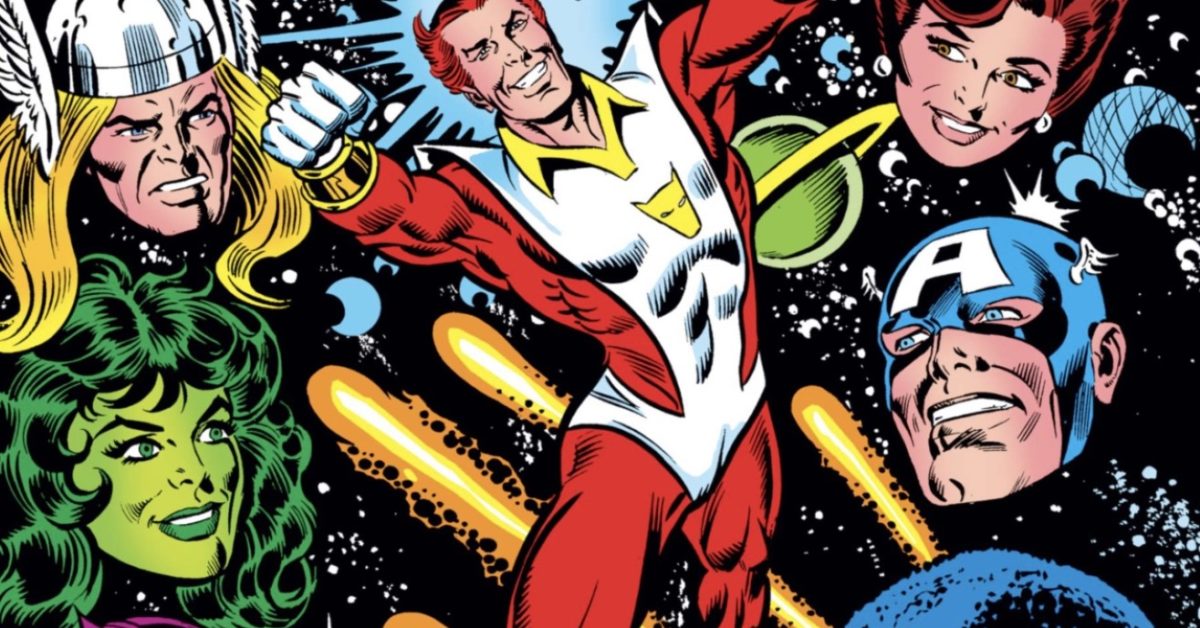 Starfox, otherwise known as Eros of Titan, was created by Jim Starlin and first appeared alongside his brother Thanos in Invincible Iron Man #55 in 1973. A member of what were then depicted as a human offshoot race known as the Eternals, he was born on Saturn’s moon Titan where his race had settled, son of Eternals Mentor and Sui-San. He has the power to psychically control other people’s emotions and, as a result. has a backstory that is more problematic than most. He has been a member of the Avengers and Dark Guardians and might just be getting a little more attention right now. A fun-loving, carefree womanizer and adventurer, he was in direct contrast to his brother Thanos, a power-hungry, nihilistic conqueror who killed their mother. But when Thanos launched his first major attack on Titan did Eros begin to take life a bit more seriously.

Starfox’s body has been enhanced by cosmic energy to the point that it ages far more slowly than most humanoids and is superhumanly strong and resistant to harm and immune to terrestrial diseases. He can withstand impacts, such as falling from several stories or being repeatedly struck with superhuman force, that would severely injure or kill an ordinary human being with little to no injury to himself. However, he is far from invulnerable and can be injured by weapons, such as bullets or knives, composed of conventional materials. His overall resistance to injury is somewhat lower than that of the average Eternal but, like any Eternal, he possesses exceptional healing capabilities. He can harness his cosmic powers to enable himself to fly at supersonic speed. Through the gravimetric potential of his body, which is related to his ability to fly, a tiny shell of air constantly clings to his body. While he needs to breathe like an ordinary human being, he has a reduced need for oxygen allowing him to survive travel through both open space and underwater unaided

Starfox can psionically stimulate the pleasure centers in nearby people’s brains, making them calm and open to suggestion using his persuasion skill. It has been suggested that when in physical contact, and there is direct line of sight between the subject and the target, Starfox can use this euphoria effect to cause a person or persons to become infatuated with him, objects, or people of his choosing or simply to make others feel good while in his presence.

Over the years, Starfox has spent much of his life opposing Thanos one way or another. Fighting alongside Titan’s handful of survivors, joining the Kree warrior Captain Mar-Vell in battling Thanos’s minions before meeting and joining the Avengers. He would later meet Eros later met Pip the Troll, and traveled the universe seeking a hedonistic lifestyle, with the power to make people do as he wished. You could see how that might be interpreted differently forty years later.

Starfox would later be put on trial for sexual assault, defended Jennifer Walters, the She-Hulk. In the course of the trial, Ms. Walters came to suspect that Starfox had used his powers on her during their time in the Avengers, resulting in a brief sexual interaction. It would later be revealed that Starfox did not use his abilities to influence her decision, but that he was responsible for her later infatuation with and marriage to J Jonah Jameson’s son John Jameson. Starfox agreed to have Moondragon shut his powers off completely rather than risk hurting more people.

It didn’t last long, but he promised not to use his powers to sleep with women, rather using them on a newly organic Ultron to bring on an emotional breakdown. Oh yeah, and there was a lot of time travel. It’s a thing. After the death of Thanos, he revealed that Thanos promised he has transferred his consciousness in a new body before his death. Everntually that was revealed as Starfox himself, who would die at the hands of Gamora.

But what are the odds that Marvel will find a way to bring him back soon?

When is the Fortnite Chapter 2 ‘The End’ live event?
DC Comics’ METAL MEN to get animated film helmed by Disney veterans
Garrett Smith joins Esports Fashion Group advisory board
RECAP: THE WHEEL OF TIME S1E5 — Big Troubles in Little Tar Valon
Inferno #3 Reveals What Doug Ramsey Was Really Up To In House Of X