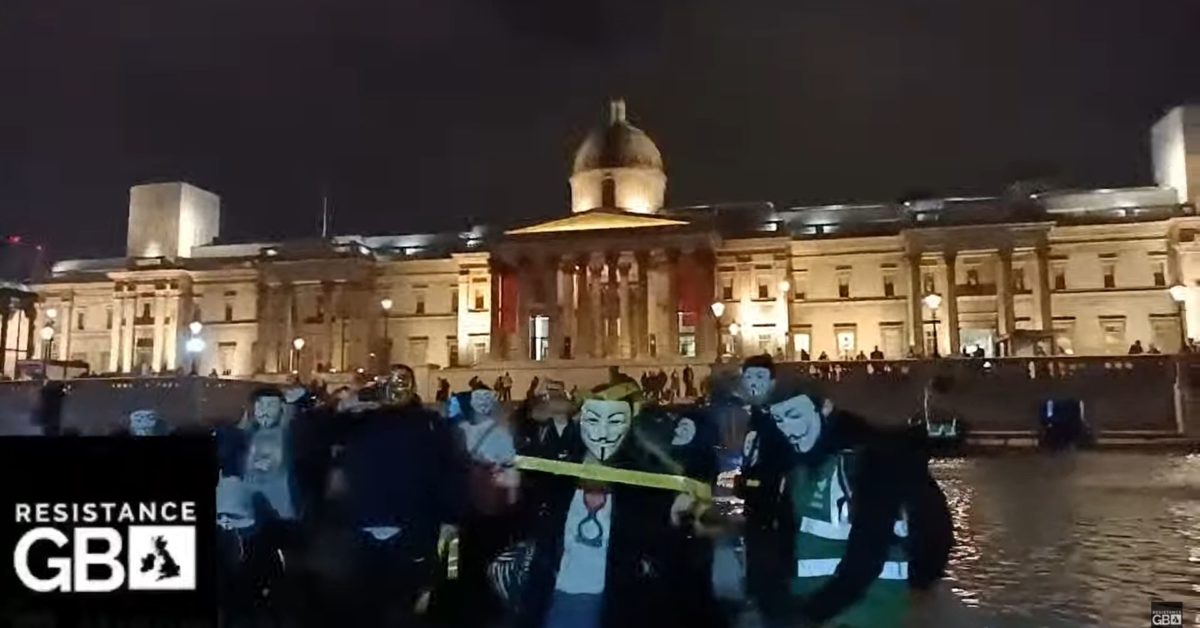 Anyone got an effigy? “Remember, remember the fifth of November, gunpowder, treason and plot. I see no reason why gunpowder treason should ever be forgot”. That was the rhyme I learned as a kid ahead of Bonfire Night, when the British public traditionally burns an effigy of Guy Fawkes to vilify – or celebrate – a religious extremist who his co-conspirators tried to blow up Parliament and the King, to put a Catholic on the throne. It kind of depends on what mood you are in.

Or late the events have been used by anarchists to protest against government, given a visual element of the Guy Fawkes mask made famous by the V For Vendetta movie, based on David Lloyd’s original designs for the mask. And tonight it all kicked off in Central London.

A Boris Johnson effigy was set on fire in Trafalgar Square as a heady mix of anarchists and anti-vaxxers set fireworks off in conflicts with police, as protestors gathered on Parliament Square, where yesterday Insulate Britain protestors had glued themselves to the tarmac. There have been many arrests, fireworks have been confiscated, police officers have set up a cordon outside the BBC and the Metropolitan Police has issued a dispersal order for Westminster as police continued to battle with a sea of protestors, as the crowd marched through Parliament Square, Trafalgar Square and Oxford Street, dubbed the Million Mask March, with V For Vendetta masks everywhere.

The Million Mask March, also known as ‘Operation Vendetta’, is an annual protest which usually takes place on the 5th of November to coincide with Bonfire night. An anti-government and anti-establishment protest, it was first held in 2012, with protests in London and Washington D.C. the most prominent. Associated with activist group Anonymous, it protests against government corruption, capitalist greed, and the erosion of civil liberties. Initially a group of left-wing libertarian activists, anti-vaxxers are also making a large percentage of the protests.

Meanwhile, in the traditionally satirical bonfire held in the town of Lewes, effigies of former Health Secretary Matt Hancock with  the woman of his affections,  a CCTV sign and the phrase Hands, Face, Disgrace, was burned along with another effigy of a panic-buying Guy Fawkes with vaccine needles in his arms, toilet paper and petrol cans. Last years’ Bonfire Night in Lewes, the biggest in the country, was suspended last year. Previously Boris Johnson and Jacob Rees-Mogg on a Brexit rollercoaster were burned, before that Boris Johnson beheading Theresa May was burnt instead. Boris this year seems to have graduated to Trafalgar Square. Before that, they only had eyes for Trump.