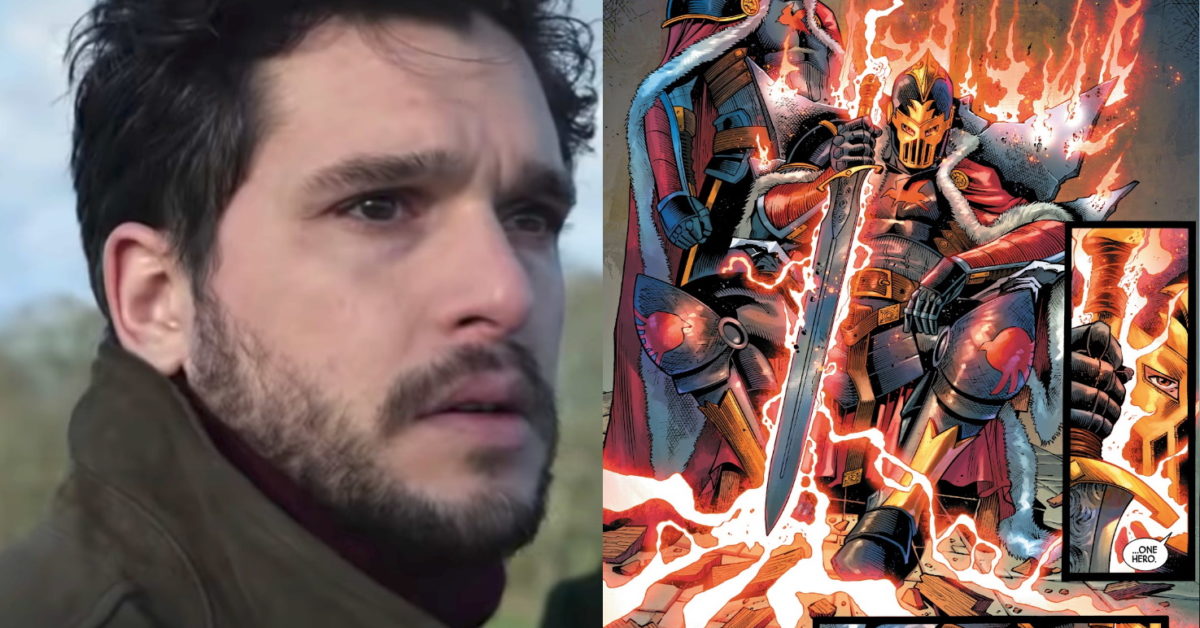 Atlas Comics, the name of the publishing company who would become Marvel Comics, first published The Black Knight #1 in 1955, six years before the Marvel Universe would properly kick off with Fantastic Four #1. It looks to have been inspired by the Alan Ladd film The Black Knight — in production throughout 1954 and released in October that year.  The first Marvel Black Knight’s set-up is generally similar to the film version: an unlikely individual Sir Percy of Scandia secretly takes on the identity of the Black Knight in order to protect King Arthur from forces who would overthrow him. This medieval knight created by Stan Lee and Joe Maneely was another take on the Black Knight of Arthurian legends who is now best known for wanting to bite your knees off in the Monty Python movie. While Sir Percy wielded the Ebony Blade, its significance would be revealed much later.

A decade later his descendant Professor Nathan Garrett created by Lee and artist and co-plotter Dick Ayers would become a villainous Black Knight fighting the Avengers and Iron Man. Dane Whitman created by Roy Thomas and John Verpoorten was Garrett’s nephew, who made his first appearance in The Avengers in 1967 as a third now-heroic Marvel version of the Black Knight, becoming a core member of the team in the eighties and nineties. Shortly after his appearance in Marvel continuity, Roy Thomas would write that the Ebony Blade was a magical sword, carved from a meteor, and enchanted by the wizard Merlin for Sir Percy of Scandia, to protect the wielder and bring them back from the dead, which acquired a curse in battle which saw it lust for battle and death. Originally meant to be used by those pure of heart, the Ebony Blade was more recently revealed to be used by those who have been able to come to grips with their own faults and push on despite them. He went back in time – in fact he did a lot of time-travelling. Following the Ultraforce in a parallel world (when Marvel Comics bought Malibu) then Heroes Of Hire, then Captain Britain And MI13 – he really got around.

However Sir Percy of King Arthur’s Court, Garrett and Whitman are revealed to be part of a long line of Black Knights, including Sir Raston of the Dark Ages who was recruited into the Anachronauts by Kang the Conqueror, Sir Eobar of Garrington who fought in the Crusades, Sir William seejn fighting during World War I and a swashbuckling Sir Henry. And even before Sir Percy, there had been eight Black Knights who had carried the Ebony Blade before him, including King Arthur’s cousin Sir Reginald. While there have also been future Black Knights, such as Ernst Wythim, from 2600 AD. And recently, the burden of wielding the Ebony Blade has been shared between Dane Whitman and his daughter Jacks Chopra, with a new series set to launch with the both of them in 2022. Odds are, February.

Now in the Eternals movie, Dane Whitman turns up as an average Joe, living in Camden, played by Kit Harington. Naturally there will be blade-related developments…

Halo artist’s new studio is making story content for Battlefield 2042
The Chiefs extends Optus partnership
Abandoned to Get Playable Prologue at the Start of 2022, Maybe Even Before That Promised Trailer
A Year of Free Comics: Be careful what you wish for in BLACKSMITH
Hideki Kamiya Talks About Why He’s Making Sol Cresta, And What’s Next For PlatinumGames