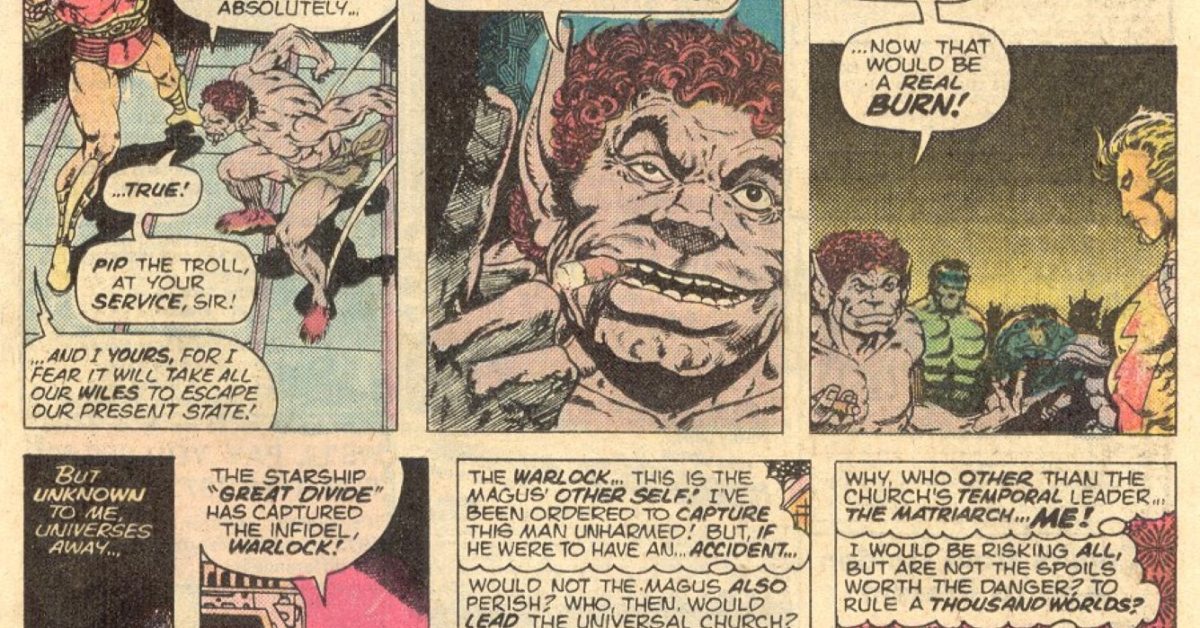 Pip The Troll was created by Jim Starlin in Strange Tales vol 2 #179, published by Marvel Comics in 1975 as foil to the story’s protagonist, Adam Warlock. I know, I picked up a copy for some totally unknown reason. After initial appearance in Adam Warlock-related comics, he was killed off in 1977. Jim Starlin would revive him decades later in the nineties Silver Surfer comic, before joining the Warlock and the Infinity Watch team, with occasional Infinity Germ-related appearance since.

Pip was once Prince Gofern of the planet Laxidazia, in the Dolenz System, in the Milky Way Galaxy. He was originally an alien of the Laxidazian race who enjoyed painting pictures of the night sky. Pip became physically and psychologically mutated into a morally degenerate, stunted, satyr-like form known as a “troll” during a bout of drunkenness brought on by a mutagenic hallucinogenic ale. Like all Laxidazian trolls, Pip has four digits on each hand, hooflike feet, and large pointed ears. After his transformation, his people, also sick of his lewd, lecherous, and hedonistic behavior, stripped him of his office and rank. He stowed away on a spaceship to continues his life of debauchery from which point, he began his habit of dressing in a pair of maroon, ripped pants – and nothing else.

Missionaries from the Universal Church of Truth visit Pip’s home planet and discover the trolls are resistant to the church’s conversion process. As a result, all trolls are ordered to be killed. Pip himself is caught after making trouble on dozens of planets, many controlled by the church. He ends up on a ship full of men and women who were to be executed. There he meets Adam Warlock, whose alternate future self the Magus would become the leader of the Church of Truth. Pip teamed up with Warlock to escape and go on adventure, meets Gamora, Thanos, battles the Magus and the Universal Church. He encounters Starfox and Heater Delight, and battles Pro-Boscis the Procurer. He would die in a battle with Thanos, but his soul was preserved within the Soul Gem.

Pip, Gamora, and Warlock return to the corporeal world during the Infinity Gauntlet incident. Afterwards, Pip was given the Space Gem by Warlock, keeping it between his toes for safekeeping, which even though he would lose the Gem, would leave him with the power to teleport, and he joined Warlock’s Infinity Watch. Years later he would hir  X-Factor Investigations to find a missing pendant of Thor’s hammer. He hasn’t been seen much since but… I think that’s going to change quite a lot soon, don’t you think?