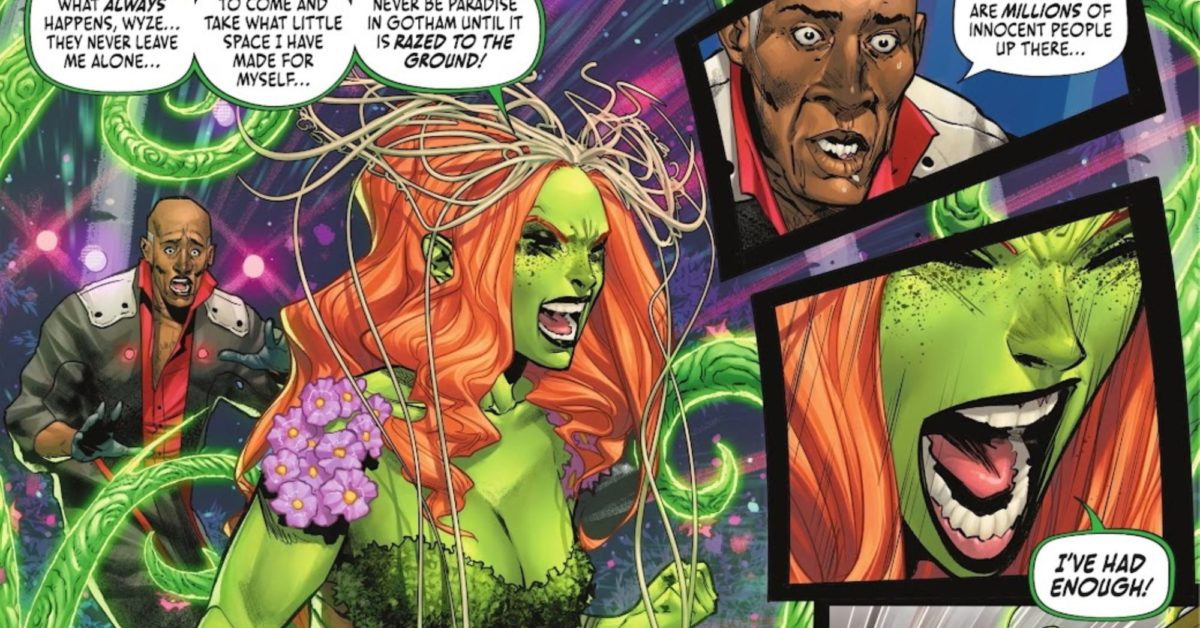 This week saw the physical release of Batman #116 by James Tynion IV and Jorge Jimenez, and the digital releases of Harley Quinn: The Animated Series:  The Eat, Bang Kill Tour #4 by Tee Franklin and Max Sarin. And both are focused on a reinvention of Poison Ivy. A character who has been through the wringer at DC Comics in recent years, with warring sides of editorial, those who want a progressive-minded anti-heroine in a relationship with Harley Quinn, and those who want the classic Batman villain and a threat to Gotham. All the time while she has become one of the most cosplayed characters on the convention circuit. In the pursuit of this, we have seen Poison Ivy murdered by Wally West, revived as a bud, split into two personalities, designated as being just a firm friend of lonesome singleton Harley Quinn in PR, as Harley Quinn got it on with Booster Gold. All the while as other creators try to restore the Harley/Ivy dynamic in anthology oneshots. While a far more mainstream Harley Quinn animated series saw them married off/

James Tynion IV has been writing the Batman comic books through a series of changing editorial regimes, balancing all these factions, but now as he is to leave the Batman books, is creating some kind of restoration of Poison Ivy. While we have the Queen Ivy version of the character attacked by Gotham’s The Magistrate and intends revenge.

But as she prepares for the entire destruction of Gotham, Harley Quinn and Poison Ivy’s ex The Gardner arrive with… Poison Ivy. Or just Ivy.

A few months ago, as part of our irregular Gotham Gossip articles, Bleeding Cool asked “How can Poison Ivy be in two places at once? Readers of that Harley Quinn & Poison Ivy series may have a clue, and recently in Swamp Thing. Ivy is in Alleytown with Catwoman, rescued from being used as a drug source, but also as Queen Ivy in her own Eden with Harley Quinn, the Gardener, Mr Wyze and Miracle Molly. But what will happen when the two meet again? With Queen Ivy growing a thick jungle underneath Gotham that’s putting the entire city in imminent peril, will Harley restore Ivy’s memory with Ivy II?” Well now it all comes together. We saw the split Ivies in last week’s Batman: Fear State Alpha #1, Queen Ivy’s threat to the whole of Gotham got revealed in Batman #112. Could she really pull the whole thing down? And does that make the Poison Ivies the greatest threat to Gotham? Or will she be revealed as their saviour? If she could take down The Magistrate and defeat the Scarecrow’s fear with her pheromones, no wonder Harley and The Gardner are trying to put her back together again... even if, in Fear State Alpha she wasn’t that keen…

Might James Tynion IV’s final issue of Batman be one to set up a new, cohesive, altruistic Poison Ivy? But does DC Comics even need it? Because the Harley Quinn Animates Series comic book spinoff, The Eat, Bang, Kill Tour gives us a Poison Ivy and Harley Quinn still very much together.

Choosing an altruistic path towards the innocent. Or course those who she doesn’t see as innocent?

You get something right out of DC Comics’ classic horror comic books. It’s interesting, James Tynion IV seems to see a need to put right what once went wrong with Poison Ivy, putting her back together again, piece by piece. But Tee Franklin just doesn’t care about the comics continuity, and just gets to tell the story she wants to, with the Poison Ivy she wants to tell it with. And coming up with a hell of an entertaining way to do so. So… why do you prefer?

BATMAN #116 CVR A JORGE JIMENEZ (FEAR STATE)
(W) James Tynion IV, Becky Cloonan, Michael W. Conrad (A) Jorge Jimenez, Jorge Corona (CA) Jorge Jimenez
The only thing standing between an insane, heavily armed Peacekeeper-01 and a high body count in Gotham City is Batman. Their first bout didn’t go well for the Dark Knight, but the city is on the line and he can’t let the Scarecrow’s master plan come to fruition…and whose side is Miracle Molly truly on? The penultimate chapter of “Fear State”! Backup: With the Bat comms unreliable, Oracle has instructed the Batgirls to stay in the Clock Tower while she and Nightwing investigate who’s behind the Oracle Network hacks. But with the Magistrate’s forces instructed to attack the Clock Tower, will the Batgirls make it out before it’s too late?
Retail: $4.99 In-Store Date: 11/2/2021

HARLEY QUINN THE ANIMATED SERIES THE EAT BANG KILL TOUR #4 (OF 6) CVR A MAX SARIN (MR)
(W) Tee Franklin (A/CA) Max Sarin
After being called out by a new villain known as Mephitic, a toxic sludge aiming to stink up the joint, Ivy and Harley head to Detroit to take matters into their own hands. But Vixen isn’t having all this chaos in her city, and she’s ready to clean up the place…
Retail: $3.99 In-Store Date: 12/14/2021